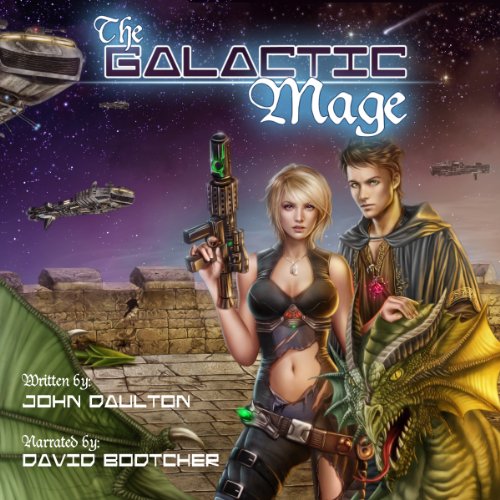 Altin Meade is a sorcerer with a curse. Seeking to avoid a looming doom, he sets his magical sights on the stars--a quest that will likely bring about the very consequence he's seeking to escape.

Far across the galaxy, Ensign Orli Pewter of planet Earth has a looming doom of her own--one of loneliness, depression and, worse, a race of genocidal aliens known as Hostiles seeking to destroy humanity. Trapped aboard a spaceship she never asked to be upon, Orli is in a fight for both her life and her sanity.

Worlds apart, Altin and Orli share a destiny, but neither knows the other is alive. The Hostiles know. And they have other plans.

What listeners say about The Galactic Mage (Volume 1)

This is a really great story and I love it and the idea. However David Botcher reads in his narration like he's trying to read poetry and it don't sound right.

Worst Audiobook I have ever heard

What would have made The Galactic Mage (Volume 1) better?

What was most disappointing about John Daulton’s story?

It might be a good story, but I never got past the second chapter.The narration is so monotone it destroys interest.

Who might you have cast as narrator instead of David Bodtcher?

If you could play editor, what scene or scenes would you have cut from The Galactic Mage (Volume 1)?

In audio books the Narrator is key.

not a bad story, in fact I rather enjoyed it especially when the couple finally met. my only problem was that that meeting didn't happen until three quarters of the way through, though I do understand about a need for some back story and where everybody came from.
I do liked the happy ending but if there is a book 2 then it won't last, I do hope the couple stays together.

Couldn't wait to hear the next bit, had only been listening to books in the car on longer journeys. But had to bring this one in with me to keep listening. Loading up the next in the series straight away.

impossible to listen to

What would have made The Galactic Mage (Volume 1) better?

having someone who could make it sound interesting read it

What could John Daulton have done to make this a more enjoyable book for you?

pay someone to read it

desire to return it for something else

shame I cant comment on the story, i couldnt listen beyond first chapter and 1/2. seemed like it was supposed to be funny. but read by a funeral director

It has a slow start to build the background of the two characters. One is the story of a young and upcoming bookworm super mage deep in his studies and the other is about the exploits of a rookie fleet science officer travelling the stars. On its own each is a standard story line in the genre of fantasy and sci fi but at the end the combination created an Interesting mix of both that is rarely seem. The writing is lightweight and their character development standard but overall an entertaining read and fine addition to any fan of fantasy or sci fi.

a good mix of fantasy and sci-fi and one book

Get past the set up and the story is awesome. I have already purchased the next book in this series.

A gripping exploration of a fascinating concept

Galactic Mage is a story more focused on exploring an interesting concept than telling a tight plot, and it does a fantastic job of that.
In theory, half the book is focused on the adventures of the mage Altin as he tries to use magic to get into space, and the other half focuses on Orli, a young woman who has spent half her life trapped on one ship in a fleet on a mission to investigate a hostile threat.
In practice, more of the book focuses on Altin. His experience has little conflict, except against his own limitations and challenges with magic. Orli's side provides the bulk of the conflict, facing an alien menace, until the two of them finally meet towards the end. The payoff was worth the wait, as I was laughing with delight at several moments after it finally happened.
The whole story was a delight to read, though after the climax the falling action was a little bit cliche and cheesy. That does not diminish the quality in the slightest though, and I highly recommend it.

Everyone is unfairly rating

This is a great book! Full of fun magic and space exploration if your complaining about the speed of the story great story's sometimes start slowly no complaints from me!
Read it!

Although the book is written well and narrated well, the characters are all stuck in a state of adolescence. Granted, the two main characters are in early adult hood (18/21). The spend most of their time either whining about things being unfair or trying to ignore the reality of their situations. This would not be a problem it they actually matured throughout the story but they do not. Lastly, the supporting characters are all just ash one dimensional and immature, be it in different ways.

Unfortunately, there is not particularly interesting item of note. No unique concept or enemies. Everything is rather standard, or at least written by someone who has only a passing knowledge of the subject. Basically, no real explanations of things.

Have you listened to any of David Bodtcher’s other performances before? How does this one compare?

Was The Galactic Mage (Volume 1) worth the listening time?

Unfortunately no, after a while I found the immaturity and general attitude of the main characters annoying. I was actually unable to make it to the end.

This is a promising start to a promising series, but I do have two problems. First, the voice acting feels like it needs work, especially when trying to make female voices or express certain emotions. Secondly, the leads have a love at first sight relationship that tends to interrupt the story and doesn't feel like anything more than love at first sight. These don’t break the story, but consider yourself warned.

Grand story. look forward to the next book. Impressed thus far. keep it up! Thanks!

I liked the mix of fantasy and science fiction. I think some of the previous reviews of the book and narrator were a bit harsh. It takes a while for the author to get the two main characters together in the same place but I think that's mostly as a way to setup for the series. The good
This book has an interesting kind of magic storytelling that isn't afraid to mix in science fiction.

The bad: I wish they'd done more world building, especially for the science fiction side of Earth. At the end we know a lot more about the fantasy world of Prosperion than that society of Earth that produced faster than light spaceships . Basically the Earth Science side was a bit generic. Hopefully in future books we will learn more about each world.

The reasons the love story happen are understandable, but a bit shallow. She's been trapped in spaceship trapped in a military culture she hates and didn't want to be a part of since she was a teenager and would do anything to get away from and he the mage, is an introvert and the first space explorer looking for new intelligent life and she's hot. A little shallow but I think they can grow beyond that.

Naration review:
The narrator is more fair than great. He does a decent read and honestly his male voices are better than any of his female voices narration, but he's not horrible. He does need to practice the skill that other others seem to have of while only being one gender, being able to change their masculine of female voice to give some characteristics of the opposite gender. I don't know how different narrators do that but they manage.
His ready the lines with different voices is also better than his straight reading narration voice.

I'm not emphasizing the good enough, but I bought this for a fair price, first for 99 cents kindle and then the 1.99 special price for buying the kindle edition. So buy one then the other and try this book for 3 dollars. Its worth at least that much for 17 hours of entertainment.