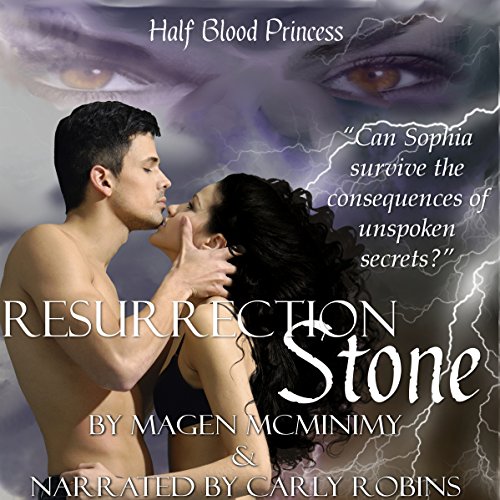 The consequence of unspoken secrets has left half-blood princess, Sophia Daletsky feeling alone and trapped. With Dante having turned his back on her and Kara slinking around with untold intentions Sophia turns to Tavian, Sarah, and Rachel as she tries to adjust to her new powers and an unsure future as Protector of Maldera Springs. Things are never easy in the vampire world, as Sophia realizes as another part of her past catches up with her in this second installment of the Half-Blood Princess series.

This book was professionally re-edited on February 11, 2013.

What listeners say about Resurrection Stone

Another piece of the puzzle!

This is the 2nd part of the series. Sophia has to protect her friends and loved ones from an old acquaintance. Tragedy strikes....will she be able to fix it?
I really enjoyed this in e-book but hearing it on audio makes it even better!

What did you love best about Resurrection Stone?

I love that the story picked up right where Blood Claim ended. Most authors when they write a series they make the storyline spread out from where the first book stops and you miss out on events that are only briefly talked about in the prologue. But not Magen she picks them right back up from when they left us in the previous book so we don't miss anything.

What other book might you compare Resurrection Stone to and why?

You can't compare 2 different books because its like comparing apples and oranges.

Sophia, because Carly does such an amazing job bring her to life for me.

No I usually don't have extreme reaction to books. But Magen's characters always make me giggle.