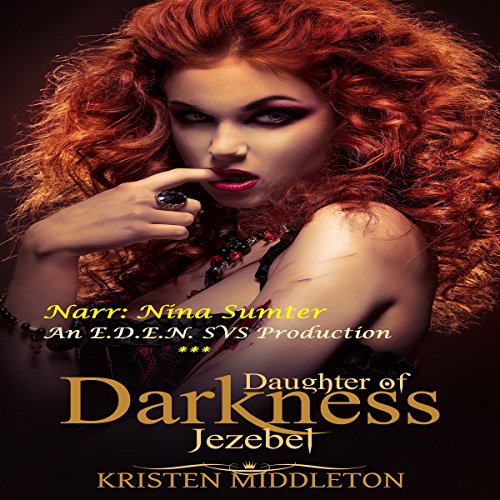 By: Kristen Middleton
Narrated by: Nina Sumter
Try for £0.00

One father plotting to make sure that they fail...

Meet Jezebel, a red-haired vampire/succubus with dark appetites. She's also a private investigator living in Sin City, and tracking down cheating spouses is her specialty. Life is good until one night when Jez is visited by a stranger named Dorian Hart who hands her a letter with some shocking revelations.

This book has dark humor and plenty of twists and turns. It is not erotica, but there are some intimate scenes in book two.

The Daughters of Darkness is a series of female heroines who may or may not know each other, but all have the same father - Vlad Montour, Prince of Darkness (also known as Vlad the Impaler, an evil villain from history). Four authors will each take a different daughter.

What listeners say about Jezebel, Daughter of Darkness

Jezebel (Daughters of Darkness) was a good read by Kristen Middleton. Jezebel is a red-haired seductress that has an appetite for blood and men. She is a Private Investigator who lives in Vegas, she tracks down cheating spouses. Everything is going good until Jess is visited by a sexy stranger, Dorian Hart, who hands her a letter with shocking revelations. I enjoyed reading this book and cant wait to read more by the author.

Yeah. Anyone who enjoys paranormal and audio would probably love this book. It's very entertaining.

What other book might you compare Jezebel, Daughter of Darkness to and why?

I always hate comparing. I'm not sure it really reminded me of anything else I've read but a few books that are similar genre that I also enjoy are Charlaine Harris Sookie Stackhouse series, almost anything by A.L. Kessler and of course anything by the author Kristen Middleton.

I love her voice! She's clear and has a wide range of voices and expression making anything she narrates wonderful.

Who was the most memorable character of Jezebel, Daughter of Darkness and why?

Jezebel. She's a vampire/succubus and a P.I. who's uniquely talented at her job. She's tough and intelligent.

I totally enjoyed the entertainment value in this story. It's a short read that flows easy and can be listened to in one sitting. The storyline is unique and fun.

Would you recommend Jezebel, Daughter of Darkness to your friends? Why or why not?

Sure. It actually reminded me a little of Lost Girl. I liked the idea of a succubus trying to help humans with their issues. I'm interested in the upcoming parts as well.

Which character – as performed by Nina Sumter – was your favorite?

This was a fun story. I liked the premise, though honestly, I was more interested in Jezebel helping the humans with their problems than I was with all of the paranormal creatures and Jezebel's family. I did find the fantastical creatures interesting, especially the BEK. The comment about them sounding like the name of a band was also pretty funny.

Some things were silly and cliche, like, "Vlad is your father!" I laughed. I also saw the twist at the end coming.

I love the effort Nina puts into all of her characters, especially the accents. I found all of the characters to be believable.

Jezebel (Daughters of Darkness) was a good read by Kristen Middleton. Jezebel is a red-haired seductress that has an appetite for blood and men. She is a Private Investigator who lives in Vegas, she tracks down cheating spouses. Everything is going good until Jess is visited by a sexy stranger, Dorian Hart, who hands her a letter with shocking revelations. I enjoyed reading this book and cant wait to read more by the author.

This is a quick & engaging intro to Jezebel's story. It definitely keeps your interest and leaves you wanting more. The narrator did a great job bringing the story and characters to life. I look forward to more in this series & by this author

I have kinda a love/hate with this author. Some of her books were home runs and others were foul balls.
I had hoped that this PNR novella would have been another home run as it's part of an expanded world written by multiple authors. Each of 4 main characters have a novella written by a different author that uses the same story thread and world. Its a great concept if executed well. I haven't read the other books, so I can only judge this one as a stand-alone.
With that being said this book fell flat for me because of the main character Jezebel. The beginning of the book sets her up as a bad ass vampire/succubus immortal private investigator and when confronted with the possibility of being hunted down, she does a great job of protecting herself using her talents but after that she becomes the typical damsel in distress with everyone having to save her numerous times. It's like the first scene didn't happen and her superhero potential flew out the window when she's in real danger. She also has a team sent to protect her; which they always do and she has the stereotype gay best friend that flirts with everything. This book had potential but fell apart.

Four sisters fighting to stay alive...
One father plotting to make sure that they fail...

Oh wow...so sexy and interesting! Loved every second of this book.

So much happened in this book that your interest never wanders. I really enjoyed this book. I can't wait to read the next book.