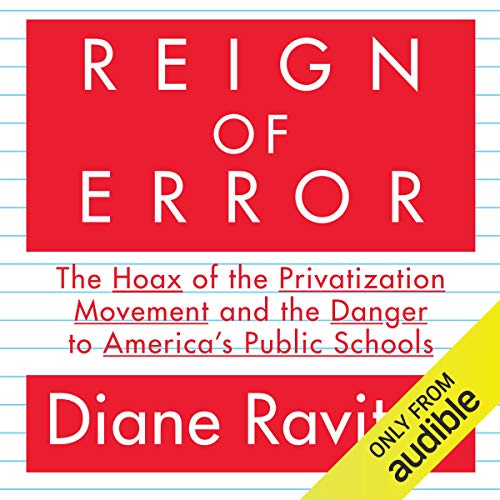 The Hoax of the Privatization Movement and the Danger to America's Public Schools
By: Diane Ravitch
Narrated by: Eliza Foss
Length: 14 hrs and 59 mins
Categories: Non-fiction, Politics
5 out of 5 stars 5.0 (3 ratings)

Diane Ravitch, America's foremost historian of education, says that public education in the United States is one of the pillars of our democratic society. In this eloquent book, she explains that our public schools have been wrongly criticized for low achievement, when federal data show that test scores and graduation rates are at their highest point in history - for black students, Hispanic students, white students, and Asian students - and dropout rates are at their lowest point in history.

But for 30 years and even longer, critics have wrongly claimed that the public schools are failing, and this mistaken narrative has set the stage for harmful, even disastrous federal legislation and programs.

George W. Bush's No Child Left behind law was passed with bipartisan support, allowing the federal government to impose testing on every child in every school. This is a practice unknown in other nations in the world. NCLB set impossible goals - that 100% of children would be proficient by the year 2014 - and many beloved public schools have been closed because they could not do the impossible.

This powerful book challenges a stale and failed status quo. It will give you fresh and important insights about the future of public education and the future of our society.

Would you try another book from Diane Ravitch and/or Eliza Foss?

NO. Although I agree with her ideas, Ravitch repeats too much. Needs tightening up.

Ravitch's views were already biased and Foss's performance was so biased and overdone. I finally had to finish reading it with an ebook version.

This is the first time I have felt the reader got in the way of the author's ideas.

Would you listen to Reign of Error again? Why?

This book contains a very good point-by-point critique and refutation of the arguments in favor of the school privatization reforms currently being enacted throughout the country. I probably would not listen to the entire book again, but will likely refer to it from time to time. This is where listening to an entire book and then having a printed copy for reference is helpful.

The book doesn't really have characters. To the extent that it talks about individuals, it focuses on the ways that "reformers'" backgrounds, early experiences, and current commitments may have biased them against critically examining their own motivations and the evidence regarding the reforms they advocate. However, the book mostly examines arguments and evidence, rather than individuals.

I found the narration a bit problematic. Part-way through the book I realized that my unease with Foss's style was that she sounds very much like the voiceovers in negative political campaign advertisements--the ones that are intended to make us view the target of the ad with worry, fear or disdain. In the context of this book, that style seemed overblown and manipulative--and I found it grating after a while. I think that a more neutral tone would have been more persuasive.

I suppose the book tended to confirm my biases. However, I think that, by the end the thinness of the evidence that supports reform was quite stunning.

SAVE THE PUBLIC SCHOOLS

I totally agree with the basic arguments made by the author. That our public schools are performing much better than we are led to believe, That test scores are not a good measure of success. That privatization is merely for profit and not for the students. That schools can't be judged by a market sector business model.

The book is very well researched, but there is much repetition of the points made, It will take a real effort for most listeners to get through the book. Still public education is so important to democracy that it is worth the effort,

Arguing from emotion gets you this book....

Hard to believe it ever passed through the hands of an editor. Stream of consciousness rants passing for reasoned arguments. The author takes both sides of some ideas, undermining her own scant credibility. Clearly there are some issues that reasonably upset anyone, and that's unfortunate but if the topic. I expect a writer who wants this much of my time will at least stick to her topic. PS. The voice actor is deliciously sarcastic and dripping with secret irony when the polemic requires it. Stupid book. Great reader.

The truth about education in America

What did you love best about Reign of Error?

The author convincingly argues that poverty and socioeconomic inequality are the real, and unaddressed, problems with education in the United States.

The author's argument is spot on.

The points were well made. A good look at different things plaguing the educational system today.

That being said, the author repeated herself quite a bit and got a bit preachy at times.

What could Diane Ravitch have done to make this a more enjoyable book for you?

Was Reign of Error worth the listening time?

If it was cut in half it would have been great.

Where does Reign of Error rank among all the audiobooks you’ve listened to so far?

Did Eliza Foss do a good job differentiating all the characters? How?

I felt that she was too biased. She did not allow the reader to make their own assumptions. Instead she used voice inflection and tone to demonstrate how the reader should be interpreting the story.

I really enjoyed the audio presentation, but now I want to copy for my bookshelf. excellent book. I would recommend it for anyone interested in education of the American citizen.

The author appears to be an apologist for the current system of public education in the USA. She is another in the long line of insiders who believe the current system just needs more money for teachers and administrators and since they are experts they will provide a better product .
She barely conceals her contempt for any and all reformers. Read this if you enjoy emotional /political rants , devoid of factual arguments.

I would definitely recommend this book to anyone that is interested in education. You don't have to be a teacher to walk away with some great information.