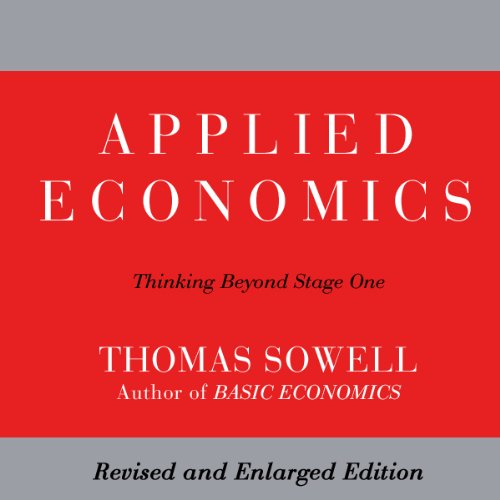 By: Thomas Sowell
Narrated by: Bill Wallace
Try for £0.00

Applied Economics is an accessible guide to how our economic decisions develop. It explains the application of economics to major world problems, including housing, medical care, discrimination, and the economic development of nations. The book is based on an international view of economics, includes examples from around the world, and shows how certain incentives and constraints produce similar outcomes among disparate peoples and cultures.
©2009 Thomas Sowell (P)2009 Blackstone Audio, Inc.

What listeners say about Applied Economics

This good provides a good understanding of economic concepts with tangible examples, however Thomas sowell is biased towards a hayekian view throughout the book. Non-the-less the book was an interesting and insightful read for those who want to think beyond typical economic policies.

Look at the long term...it's important!

Look to the long term...that's the main message of Applied Economics. Dr. Sowell is a master of making the complex understandable. This book covers a number of topics such as rent control, land use restrictions, and corporate tax rates. He follows each through to its logical conclusion, pointing out that politicians often cast votes with an eye only on the current election cycle. We need to make wise decisions based on sound facts, not emotion or sound bytes. Dr. Sowell is a very wise man, and a wonderfully effective teacher! Any book he writes is worth reading! 100 percent!!!!

Comprehensive and yet easy to listen to

An in depth and well articulated work on the goings on of the American economy. Despite the comments of other reviewers, this book does not support the 'right wing' Rebuplican agenda like books by Glen Beck or Ann Coulter might. Rather, Sowell focuses on economic facts and calls members of both political parties for actions taht tend to damage economic prosperity.

Also, unlike the political cheerleader authors, Sowell's works are more educational in nature, and spend lest time bashing anyone than they do explaining actions and consequences. While he certainly notes that politicians (on both sides) tend to act against the best long term interests of economic growth... he shows why they will inevitably do so, regardless of party, by outlining the incentives that govern political decisionmaking in relation to economics.

Well worth the read, regardless of your political orientation. Be warned, however, the economics discussed here is based on looking at the choices real people make rather than on studying the aggregated graphs of entire populations (ala John Keynes). It's an easy listen as well, despite the offputting title. The prose is light and isn't filled with overly academic pretention, and the narrator handles the material well.

While listening to this book I was impressed by the excellence of the writing but disappointed as I found myself again and again distracted by the reader. The reader seems to think it's his job to dramatize the book. In all books, especially non-fiction, the reader's influence should fade into the background so that the writing comes to the forefront. This reader almost seems to be trying to upstage the writer by continually bringing the focus back to himself. It was a solid text and very interesting, I just wish they had rehired the guy who read Sowell's "Basic Economics."

Thomas Sowell writes more clearly on economic issues than almost anyone else (though sadly he recently retired from writing). While others think and analyze in aggregates (women earn less than men, black men are disproportionately murder victims, the bottom 20% aren't making real economic progress), Sowell breaks down the figures to show that comparable women have earnings nearly identical to comparable men, black men are disproportionately the shooters in homicides and the people who were in the bottom 20% a generation ago aren't there now (unless they still don't add economic value to others). His conclusions don't fit neatly onto protesters' signs or into pithy slogans, however.

Sowell clearly explains that discrimination is more prevalent where the costs are low (everyone else also discriminates against a certain group, or there are so few laborers of a particular race or gender that excluding them barely shrinks the pool) and less prevalent when the costs are high (employers lose a competitive advantage because they hire inferior workers who reflect their biases).

If you haven't read Sowell, you can't talk intelligently on discrimination, economic distribution or the differences in economic performance and income of individuals with different racial, ethnic and gender characteristics. Period.

I'm not a free markets zealot, so not for me

I love to read books that promise to pierce my mental bubbles. However, those pinpricks must be pressed through by evidence.
This author holds his many opinions very confidently, but drifts lightly over the facts.
One example is healthcare: He is all in on free markets and despises public healthcare.
As fatal flaws in public healthcare systems, he points to patients in public healthcare systems who have to wait to receive non-urgent treatment. He points to government bureaucrats who have a say on whether treatments are justified.
Might he show how his beloved free market system avoids those flaws? Might he deal with the poor and middle-class patients who have to wait forever for non-urgent treatment because they can't afford it? Might he deal with the free market bureaucrats who decide which treatments might be covered or not?
He does not.
I sensed that he is fully satisfied with preaching to the converted and could not care less about convincing me of his views.
I am not worth his trouble; he is of no service to me. Then, let us not bother each other.

A spellbinding and captivating experience. I enjoyed the examples and relevance. The author clearly explains how to separate political from economic incentives, and explains why in so many areas we have difficulty communicating our political ideas with one another.

I like hearing Sowell rant about how stupid liberals are, but aside for the katharsis, this book has very little to do with applying economics. I'd say this book is a shortened combination of his culture series and his basic economics book

Thomas Sowell did an excellent job organizeng this book, chapters are easy to follow and the book flows very well.

When I was studying economics as an undergraduate, it was called political economy. Dr. Sowell's book illustrates how politics drives economics. The discussion of housing prices in California was especially illuminating to me. It makes me wonder how much of the cost of medical care is driven by politics.

I found this book to be very "listenable" and and helped numerous three hour commutes go by quickly.

I read Thomas Sowell's Basic Economics before this one, and it is a good follow up. It does repeat a lot of the same themes covered in BE but with more focus on the long-run effects of policies that may appear to pay off in the short run. He also does diverge somewhat towards the end in his discussion about immigration, but it's still good analysis even if he sort of goes off on a tangent. Sowell is a master teacher, able to explain economics without charts and graphs and be understood.