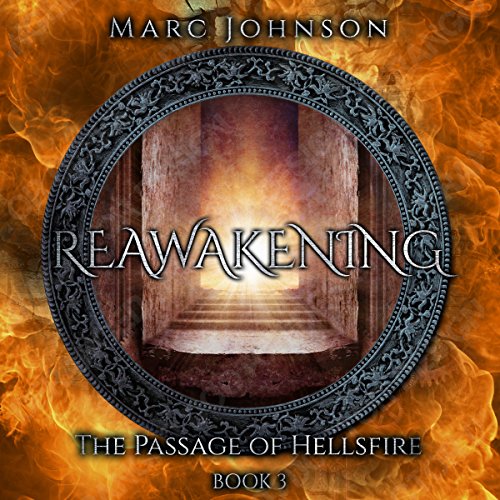 To undo a mistake made a thousand years in the past, the wizard Hellsfire used his magic to bring down the Great Barrier that once divided the northern and southern lands. In doing so, he nearly brought war to his own homeland, and he afflicted the love of his life, Princess Krystal of Alexandria, with a potent and deadly curse.

Since then, Hellsfire has been working in Tyree with its Elemental Council, to rebuild its war-torn land and find a way to break Krystal's curse. Now Krystal's time is running out. As the princess fights for her life, Hellsfire learns that the wizard responsible for the curse - his old enemy Premier - is heading to the Burning Sands to steal the mysterious Jewel of Dakara.

If Hellsfire can capture Premier and learn the secret of the curse, he can save Krystal. But the Jewel of Dakara holds its own deadly secrets, and the hunt will take Hellsfire farther than he ever imagined, and cost him more than he bargained for.

The past is never gone nor buried...

It keeps getting better!

You have to take a ride in Hellsfire unbalanced magical world. No good deed goes unpunished and this books shows that as his good deeds have backfired on fire.
You could read this as a stand alone book but personally I think you appreciate it more if you have read the first two. On the plus side they are also great, although I do think that this has built on those two and is the best. Hellsfire's world is one of life threatening situations that he has to work through. There's suspense and action and the word that the author has crafted for us is amazing.
I loved the pace of this throughout. There's always plenty going on but not so much that you can't follow the plot or characters - in other words it's just right.
I like the characters that we have brought with us from previous books and the mix of new characters are also great. The plot is great and we have some interesting developments towards the end of the book.

Great narration. It gives a good sense of pace to the book, of urgency or peril and it draws you into this crazy magical world of Hellsfire. Between the author and the narration we have a hit that if you are a fantasy fan is a must read!

Having read all three books, this was the best yet. The journey of Hellsfire continues. The whole plot was the best so far and I felt really drawn in by the whole story. I thought the book flowed a lot better than the last book.

Solid performance by the narrator. Top-notch.

As this was received through audiobookboom.com, I started with book 3. I was worried about missing information from the first 2 books, and not being able to figure out what was going on, but the author did a good job of providing some background detail and it was still enjoyable. Having Australian born, Bryan Zee as the narrator was a nice touch. Gave it a very interesting feel. Almost like Crocodile Dundee's take on Lord of the Rings. I'm seriously thinking about going back for books 1 and 2 just for the experience.

First off I should mention that I am starting the series with book three. I haven’t read books 1 and 2, so I can’t comment on how well this book fits into the trilogy. I will say that I didn’t have any trouble getting into the story and didn’t feel like I was missing any vital information. Marc Johnson’s writing flows very well, and keeps the reader engaged. First person narrative can be difficult, but he did a nice job of not just characterizing Hellsfire, but also providing depth for some of the peripheral characters as well as describing the world. There were some cool concepts/beings he introduced like the Malika (sp?), Hellsfire’s Darkfire, Crosswalkers, the Burning Sands, the walking construct and the Elemental Counsel.

I’m not sure if discussing the book’s first few pages constitutes spoilers, so I’ll say **Spoiler** just in case: The book began and I was fully engaged with the story, then I was let down with a bump as it was merely a dream sequence. I’m not enamored with dream sequences especially when they start off a story, as the reader feels that they are starting off on the adventure only for it to be a fake scene in a character’s head. That being said after I read the next event, I realized the author was using the dream and the following event as a method to provide backstory for the MC rather than just a straight info dump. So for anyone who dislikes the dream idea, do hang in there as it does serve a necessary purpose and is more interesting that just paragraphs filling in the history. **End Spoiler**

Hellsfire is a decent character. He tends to dwell a bit on his guilt, but he is likable and tries to do right by everyone. I found the scrying and flashbacks to Krystal an interesting way of keeping her somewhat of a main character and present throughout the narrative even though she isn’t actually along for the ride. I would really like to see more of what she’s like as a character when she’s not incapacitated. There were also some interesting and quirky minor characters that would be fun to explore in more detail in the other books (previous or subsequent depending on the character’s intro).

Minor quibbles... I didn’t enjoy the part of the story with Serena and Alana as much as the rest. It felt like this part stalled the storyline a bit and the family bickering was annoying. Also Serena’s use of ‘cutie’ pulled me out of the narrative every time she said it. However, it wasn’t a long part of the adventure and was over fairly quickly.

Narration: Bryan Zee had a pleasant voice and he read at a decent pace. His accent (Australian?) added to the narrative. As a personal preference, I like fantasy read with an accent as it tends to add to the other world-ness for me. Bryan did a good job of voicing Hellsfire, showing both the heart and determination of the character. Occasionally some of the minor character voices weren’t consistent, but he did a nice job of showing character emotion and relaying the excitement of the story. You could tell he was fully engaged in the story and enjoying the narration.

For those who like to know... there are two ‘almost’ sex scenes (very mild) and the swearing was kept to such a minimum, I think there were only two words uttered in the entire book. There was much violence and gore, but it did suit the storyline. I think the book could be suitable for YA depending on the teen.

I received Reawakening: The Passage of Hellsfire, Book 3 free in exchange for an unbiased review.

I really enjoyed this story! Full disclosure - I did not listen to the other books in this series but was able to enjoy this one. This was a really great fantasy story that was full of action and suspense. Highly recommend!


Hellsfire is on a quest to cure his princess.

His journey leads him to more, more information, tasks, and problems.

He has way too much to deal with including ancient runes, a demon, as well as curing Krystal.

This was the best book in the series so far, in my opinion because it was packed with suspense and action. .

Bryan Zee did well with the narration.

Note:
&quot;This audio book was provided by the author, narrator, or publisher at no cost in exchange for an unbiased review.&quot;