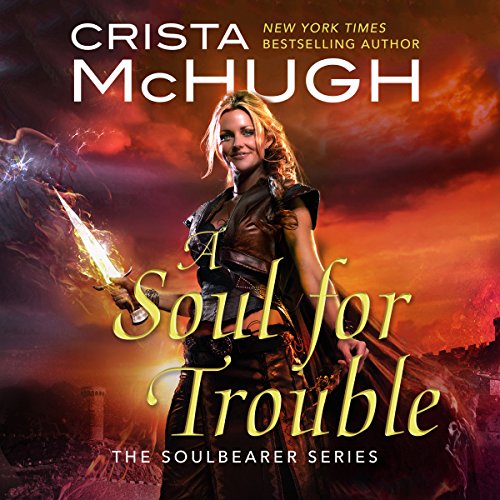 When you're a witch named Trouble, chaos follows.

Arden Lesstymine (known to everyone as Trouble) likes attention as much as the next girl, but this is getting ridiculous. When an insane stranger is murdered at the inn where she works, Trouble becomes the next Soulbearer for the disembodied god of chaos, Loku. Yes, it comes with the ability to channel the god's limitless power, but at the cost of her sanity - literally. Now she has a sexy but cynical knight claiming to be her protector, a prince trying to seduce her to his cause (and his bed), and a snarky chaos god who offers a play-by-play commentary on it all, whether she wants to hear it or not. To make matters worse, a necromancer wants to capture the soul of Loku for his own dark purposes, and the only way he can get it is by killing her first.

A great romance that has elves, Kings, princes, witches and necromancers! Arden is a bar maid one minute and before she knows it her life had taken a complete u-turn when Loku the chaos God decides she will be next to hold his soul. With Dev as the soul bearer trying to protect her a great adventure begins.

Not entirely sure. If not for the utter stupidity of the main character, and the totally obnoxious "handsome Prince" this might have been a fun story. The lead female is too stupid to be true. Vacillating between one male lead to the other, while vowing never to follow the path her mother trod, which is the very path she's happily skipping down. I absolutely detest the character of Kell, the so called handsome prince. I find characters like him sickening. The underlying story seems to be a good concept, and there's a great deal of humour mixed in. I'll keep listening, and hope the lead female character gets her head out of her armpit.

Has A Soul for Trouble put you off other books in this genre?

Not sure again. Less stupid characters might make a difference.

Which character – as performed by Gabra Zackman – was your favourite?

I am a big fan of Gabra Zackman, having listened to her performance of the Ixia series by Maria V. Snyder, and loving it. My favorite character in this story has to be Loku, with Dev a very close second. These are two very, very different characters, but Ms Zackman gives them such presence and depth. Plus the humour comes across in Ms Zackman's delivery of some of Loku's more outrageous comments.

Did A Soul for Trouble inspire you to do anything?

Aside from punching Kell in the mouth, no, not really.

I tend to like character driven stories, and that means I like well written characters. Some of the characters in this book are good, but the lead female character of Arden, or Trouble as she is better known is just too brainless. She irritated me so much I wanted to slap her. Plus, as I've already said, I detest characters like Prince Kell. Him I would gladly have thrown to the necromancer, with the plea that he improve his personality by making him undead. It would have been an improvement from the self-satisfied, arrogant, condescending, snob he was to start with.

Where does A Soul for Trouble rank among all the audiobooks you’ve listened to so far?

Which character – as performed by Gabra Zackman – was your favorite?

It's a toss between Dev and Loki

When I wasnt listening to the book I was wishing I was. The story really came to life and had me captivated from the beginning.

This is a great read and I just love the characters and this land Crista has created for us. If

So far great premise but not alot of action and the story really didn't go anywhere, I enjoyed Loku, I enjoyed the story but I was waiting for something more exciting, i wish the love triangle world be more in the background. I'm going to get the second book and hope it has more.

It starts out really engaging and rather macabre..

What did you love best about A Soul for Trouble?

..... the dissolves into tedious and boring.

It just loses its steam after a terrific beginning. I read through chapter 18 before deciding it was getting monotonous THEN it repeated the same phrase "sweet lady moon" for the hundredth time and I stopped there out of complete annoyance.

Have you listened to any of Gabra Zackman’s other performances before? How does this one compare?

I CHOOSE titles because of her narration. She is fantastic with narration, characters and accents!

Yes, it annoyed me to the point of casting it away.

A book that is not only hard to put down, but one that you can hardly wait to finish so that you can start it again!

The growth of a warrior

If you could sum up A Soul for Trouble in three words, what would they be?

The actual growth of people and their faith through hardship.

Gab is Great as usual.

I a not particularly good with Self Loathing. Most people may admit it to a point. But when something goes wrong and one feels it is their fault, that they could have stopped it only if. . . Wrong! I believe that for someone to grow, they must go through pain of some kind. If only to admit it to one self in the beginning. They would fight against it, but ultimately agree with it or except it.

This is an amazing start to a story that will surprise anyone who gives it a chance.

Our heroine, Arden/Trouble, is a girl who was literally in the wrong place at the wrong time..... or was she. I'm still trying to decide which I think is true. Although she starts as a lowly bar maid that people dispise and treat horribly, she evolves into so much more. I don't think she sees it though. She is naive, sure, but I think anyone in her position would be naive to the mysterious world she all but fell into.

And our heroine every now and then has some sass that had me laughing and applauding her. Even though she is surrounded by a grouchy, unattached knight, Dev, a overzealous and overly affectionate prince Kal, and a cocky, perverted God, Loku, she keeps these men in line even though they think they are protecting and keeping her in line.

I cannot wait to see where this story progresses to. Especially after the little tidbits of information that are given to make the reader want to find out more and more about these characters.

Also, I applaud Gabra for her amazing talent on the audio books. She really brought these characters to life for me.

Too much unbelievable romance ruined a good story

I enjoyed the book, but, I found myself frustrated at the almost random and constant insertion of dick throbbing vag dripping drama that was not consistent with the characters personalities. A 300 year old elf and a virginal tavern wench in the heavy male chauvistic culture should not respond to the a la carte weak advances of a 14 year old concept of lust and love.
The rest of the times I thought the characters different enough and their motivations believable, but in reality, this was a weak romance novel with a few short scenes of magical kick ass.
I think if the author reduced the number of mind numbing erections scenes it would have had a greater impact when they did occur.

Would you listen to A Soul for Trouble again? Why?

Yes, It was narrated pretty good, this is the first audio book I have ever listened to, and it was done pretty good.

Dev.. there was just something about him. not quite sure what it was

Have you listened to any of Gabra Zackman’s other performances before? How does this one compare?

No, I haven't this was my first audio book

It blows so don't bother.

Writing is terrible, immature and lacking of character development inside a story with pacing issues. It's also graphic in a few places for nothing other then shock value. The rape/suffocation scene early should have been a red flag but I ignored it thinking i was being too judgemental. An hour and a half in the 8 hour book i could not take it and turned it off.