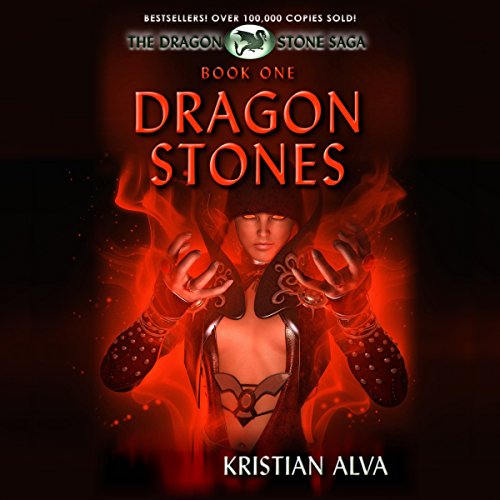 Sequestered deep in the capital, the tyrannical Emperor Vosper weaves a plan to destroy all the dragons. He succeeds in driving them to the very brink of extinction. Only a handful of dragons and riders remain; living in exile in the desert. When young Elias Dorgumir finds a carved dragon stone in the forest, it brings empire soldiers to his doorstep, and puts Elias on the run with a bounty on his head.

With some help from his friends, Elias must escape the emperor's wrath and try to make it to the safety of the dwarf caverns. Elias holds the key to the salvation of the dragon race. Is Elias strong enough to save himself and halt the evil that is spreading across the land?

Quite an entertaining series, well narrated. Is however only a one listen too series, as I will only listen once.

A fantasy with a gravity to appeal.

What made the experience of listening to Dragon Stones the most enjoyable?

The narration was excellent. But so was the story. I liked that the story isn't all adventure and good people.

Elias - because he is in the thick of it and doesn't know squat.

Which character – as performed by Adam Chase – was your favorite?

The slaughtering of baby dragons was a touch disturbing, which made me want to read on.

I was hooked on this book from the beginning. It starts with a dark scene – the Emperor’s men have been out searching and destroying dragon nests and they have just found one. While not overly graphic, the point comes across loud and clear with the killing of newly hatched dragons. I definitely like my fantasy to have a little bit of a darker side, a more serious side, as this shows there are real consequences for the characters to consider. Then we moved to Elias and his grandma. She was a strong, guiding force in his life and such an integral character before Elias set off on his adventure. Through her, we have just enough background to be very curious about many things: her own past, Elias’s parents, dragon riders and dragons in general, etc. I definitely wanted more and the author delivered.

Pretty soon, Elias comes across the dwarf Thorin (and I think Thorin is actually a half-breed dwarf-halfling, but I could have that wrong). And yes, is Thorin a nod to Tolkien’s work? Thorin and Elias become quick friends, mostly because Thorin has recently fallen out of a tree and needs some healing and Elias obliges. They adventure off together, dodging the Emperor’s men and necromancers, meeting more dwarves, ever heading for safety. The necromancer we meet was freaky scarey and the voice the narrator gave her was quite fitting and a little frightening.

The adventure scenes are speckled with scenes of another kingdom – the last hold out from Vosper’s tyrannical reign. Dragons, their riders, and magic users are welcomed and safe there (or at least not actively hunted by the government). We meet some of the dragon riders, the dragons, and the king. There is an interesting scene involving star fruit (a personal favorite of mine). And in the second half of the book we meet a dragon and her rider who were once imprisoned and tortured by Vosper and his minions. Wow! I don’t know if they are the good guys, good guys gone a little insane, or potentially a chaotic bad element off on their own. I am fascinated by these two and really, really look forward to learning more about them in the next installment.

This was a great start to a fantasy series. While suitable for most (if not all) audiences, it has enough gravity to strongly appeal to most adult readers. The characters have depth and history, the world building is just enough to give scope and interest without bogging down the story. The narration was excellent.

Narration: Here is where I gush about the narration of Adam Chase. I loved his various accents for the different peoples of this book, especially Thorin’s voice and that creepy voice of the necromancer. His female voices were also done quite well, especially for Elias’s granma.

I have always loved fantasy books and this one is just a great book, I really love the ways the characters have different voices instead of just one. Dragon stone kept my interest and now I will read the second book in the saga. Any one any age will enjoy this book. I am 60 and I love these types of books, it has me feeling young at heart to read this and I have enjoyed every word.

This feels like a blatant knock-off of several other series, primarily Eragon. Boy finds magic stone in the woods, goes on a quest to elude evil king and get to a rebel kingdom with the help of a wise old man, add dragons and dragon riders, humans, dwarves, elves, parents who may or may not be evil, an ancient language. Substitute Necromancers for Shades. There's the odd dash of Harry Potter (incendio!) in some of the spell casting and in the way relatives have sacrificed themselves to save him. A bit of Tolkien in some of the naming. I'm enjoying listening to this partially because it is a good plot, partially because the narrator is so much better than the guy who read Eragon, and partially because it's become kind of humorous to see how many plot devices from other authors I can pick out.

It seems to be geared towards a younger audience than I expected. The category listed is SciFi: Fantasy: Epic and I think it would be more appropriate under Teens: SciFi. This is not really an adult book, but I'm listening anyway and enjoying it.

I GOT A FUNNY FEELING ABOUT THE TWO OF YOU
If you are a fan of McCaffrey, Brooks or Glen Cook, you will love this, and you don't need to read any further.
1. This is most definitely written for pre-teens.
2.With the exception of the prologue the Dragons might as well be wall paper.
3. Our hero, disobeys his grandmother and gets her killed.
4. The grief the kid feels over his grandmothers' death, that he caused is about as much as I had over the last spider I killed.
5. Very little happens in real time. Most everything is something remembered in the past.
6. The Emperor is evil, everybody says so. Unless I snoozed through it, we never hear from the evil, evil Emperor.
I AM MUCH OLDER THEN I LOOK
I love Dragon stories, but the dragon stories I love involve Dragons with Personality. Robin Hobb has a great series called The Rain Wilds Chronicles, in which the dragons each have distinct personalities. Dragons are suppose to be intelligent and arrogant. The Dragons in this book and some others are domesticated or genetically engineered. These domesticated Dragons could be replaced with Unicorns, Pegasus, or dogs and the story would read the same. I will not continue this series.

17 of 24 people found this review helpful

I couldn't finish it.

The narrator had an irritating voice, and the genre was more young adult -not adult, fantasy, epic.

One of the other reviewers remarked about the similarities of this book to so many other popular series, and that he basically listened to this series just because the narrator does such an excellent job compaired to the other series. I agree! Still, one of those other series is by far one of my all time favorites, and this one just gets 3.5 - 4 stars.

An attention grabber in the firtst chapteer.

Interesting and believable character development. Narration was clear, had proper emotion during dialogues and very well done. I was led directly into the second volume.

Would you listen to Dragon Stones again? Why?

What other book might you compare Dragon Stones to and why?

ONE OF THE BEST I HAVE READ IN MANY MONTHS

over all it was good. none stand out , and that was good. usually it drops off in places but this was well paced and riveting