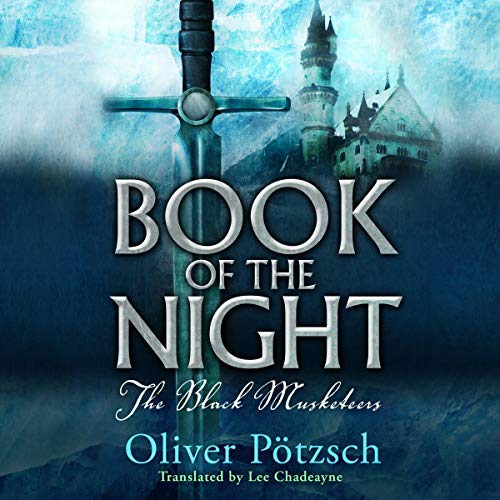 Book of the Night

By: Oliver Pötzsch, Lee Chadeayne - translator
Narrated by: Will Ropp

In this thrilling adventure by bestselling author Oliver Pötzsch, thirteen-year-old Lukas has been trained as a swordsman by his father, a nobleman who was once a famed Musketeer. When the threat of war and accusations of witchcraft spread across the land, Lukas's life is forever changed. He flees his home and vows to find his missing sister.

Surviving as an outcast, Lukas encounters thieves and mercenaries, a strange astrologer, and a master swordsman. He also meets three other fencers - Giovanni, Paulus, and Jerome. Each brings a special talent to their team that leads them to the Black Musketeers, the best fighters in the army. But living with the black-armored Musketeers is nothing like they imagined. In his quest to find his sister, Lukas learns of a legendary book that holds powerful magic. As he fights to keep the Book of the Night out of the hands of his greatest enemy, Lukas discovers the secrets of his own family and what it really means to be a Musketeer.

What listeners say about Book of the Night

Thoroughly enjoyed this book. in fact finished it in three days. Cant wait for the second book

I chose not to listen to more than a handful of chapters due to the timbre and intonation of the narrator. I’m assuming he is either very new (unlikely for a well-known author’s book) or was reading for young children. The narration has the predictable, over-emphasized tone of a kindly librarian reading a Winnie the Pooh book. Perhaps the story was good, but it is likely intended for much younger audiences.

as always this other keeps me bound to his stories from the first pages and has done it again on this book. I look forward to Oliver's books at every release

Started reading this after finishing the "Hangman's Daughter" Series. It is not even in the same league! Just a bunch of made up tripe about witches and magic. Had bought both books in series and now will not bother reading the second book. Will be trading them both in without even reading the second in the series. Reads like a book written by and for a teenager.

Overall I really liked this book. I enjoyed the story, the characters, the pace. My one caveat was that I listened to the Audible and the narrator was just a tad too quick and I could hear him take his breaths. Not sure if this was just him or the production. I still give it 5 stars as I was immersed in the story.

Enjoyed the book. But seemed targeted for the teen reader. Not sorry to experienced it however. Just expect a light read. I guess I should say "listen" rather than read😊

Like I am known to do occasionally, I read book 2 in the series before book 1, but it didn't take away from either of them. As one of the characters said at the end "and what would Merlin have thought about this?"

The power of books.

Story of a 13 year old noble mans son who had to grow up fast when his father was killed by the Swedish invaders. His mother and sister we taken by the soldiers. This began his journey to find his sister in medieval Europe. His life changed when he became acquainted with the Black Musquateers

For me it took a while to get going

Once it did, I thought it was fantastic. Characters were great. Now I want more! Can’t wait to listen to the next one. Liked the fact that it was about magic t not overwhelmingly so.

Of all the renditions I listened to date, this is the worst. The actor has no idea of intonation, has difficulties reading. Can’t imagine how this recording was released for public consumption....

I am not sure the author knew what kind of book he was writing. The first part was about the main character developin swordr and fighting skills. The second half introduced zombie type characters that couldn't be killed and magic spells. Too unbelievably.