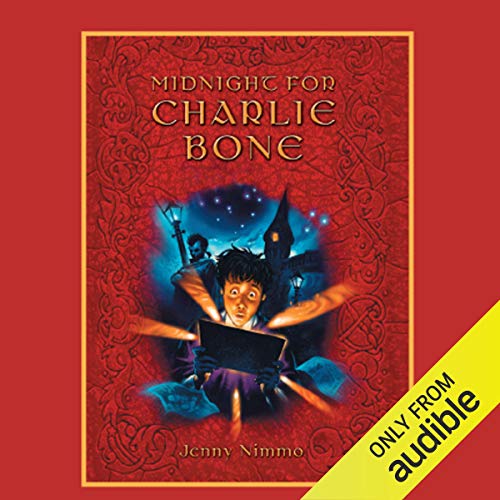 By: Jenny Nimmo
Narrated by: Simon Russell Beale
Try for £0.00

An academy for magic and special talents. A destiny unfulfilled. A secret legacy.

Since his father died, Charlie Bone has lived with his mother and her mother in the house of his other grandmother, Grandma Bone. Looking at a picture of a couple with a baby and a cat, he suddenly discovers he can hear their voices.

Although he tries to hide his new gift, Grandma Bone and her scary sisters soon find out and send him to Bloor's Academy. Charlie quickly finds life at Bloor's pretty tough, with its strict rules and the malevolent head boy, Manfred, set against him.

When Charlie discovers that the child in the photograph is being held, hypnotised, against her will, he and his new friends with 'gifts' try to awaken her. But can they overcome Manfred's sinister hypnotic gifts?

What listeners say about Midnight for Charlie Bone

The worst narrator ever.

I read these books as I child and I was so excited to find them here, but I don't think I will be able to finish all of them. I might be very spoiled by Stephen Fry, but this guy should not read books. Sorry.

I adore the series and thought it was really well-read! Super clear and easily understood.

i really liked the voices. they sounds like i thought they should. the storyline is great and the characters are awesome.

I thought the story, characters and reading were absolute top notch work I have no complaints
I'd highly recommend this book to anyone interested
It kept me on tender hooks

The books are very interesting the story line and the narration is so good that it keeps you wanting to read the next book I recommend and anybody over the age of 12!

As Magical as Harry Potter

I first read this back when I was in 7th grade and fell in love with the series. Jenny Nimmo is an astounding children's author and has created beloved characters through her story telling. I had found a copy of the audibook at the library and was transfixed from the start. Simon Russell Beale does a marvelous job narating the story and giving the characters more body and personality. Do not skip this audiobook because you'll be disappointed.

Charlie Bone is awesome!! I loved the story! The narration was fantastic! Can’t wait for book 2!

This seems to be a later reissue of the book, same reader. What is said here is equally true there. A straight forward tale of horror at a British boarding school, with staff, grandmothers and aunts of the worst sort. No joy, no humor, but not as depressing as Snow Spider. Thankfully, Charlie has a kindly "widowed" mother, a good uncle and good friends. It is a very different story from Potterverse, and for that reason I put it right up there as a "must read" with the more light-hearted classics of Hogwarts, Prydain, etc.
Beale is very expressive but too slow, so bump up the playback speed. Between my second third time through the series, I have visited a couple hundred other books. Still staying with 5 stars.

It's a story of how a young boy named charlie saves s girl who is lost .

I am so excited to have been introduced to this series by my 10 year old niece. Everything you need is there, evocative, magic, human connections to one another and animals.....

Underwhelming, lackluster, and mediocre. Not without a few good punches though. But I won't be finishing the series. The narrator did a good job though.