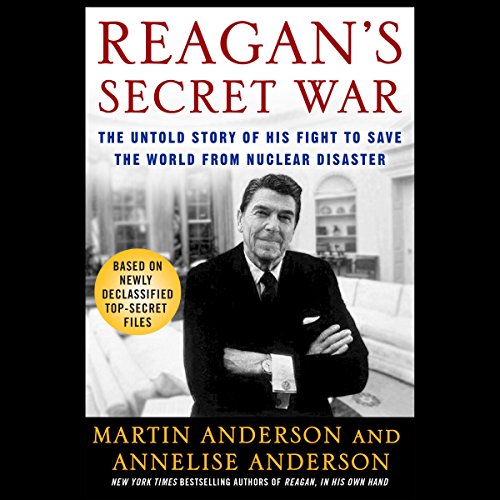 By: Martin Anderson,Annelise Anderson
Narrated by: Mark Deakins
Try for £0.00

On February 6, 1981, at his first National Security Council meeting, Ronald Reagan told his advisers: "I will make the decisions." As Reagan's Secret War reveals, these words provide the touchstone for understanding the extraordinary accomplishments of the Reagan administration, including the decisive events that led to the end of the Cold War.

Martin Anderson and Annelise Anderson drew upon their unprecedented access to more than eight million highly classified documents housed within the Ronald Reagan Presidential Library in Simi Valley, California - unseen by the public until now. What emerges from this treasure trove of material is irrefutable evidence that Reagan intended from his first days in office to bring down the Soviet Union, that he considered eliminating nuclear weapons his paramount objective, and that he - not his subordinates - was the principal architect of the policies that ultimately brought the Soviets to the nuclear-arms negotiating table.

Where does Reagan's Secret War rank among all the audiobooks you’ve listened to so far?

Among historical records Reagan's Secred War is probably directly behind scripture and The 5000 Year Leap. I believe God sent Reagan to accomplish the good he was able to achieve and placed him in circumstances where he was able to achieve what needed to be done. I'm proud that Reagan's election was the first presidential election I was able to be a part of and I was able to cast my vote for this great American. Only the first 5 presidents and Abraham Lincoln can be placed in the same class of presidents. If we didn't have other government representatives so focused on destroying our freedoms I'm sure he could have brought us back in line to what our country should be.

What other book might you compare Reagan's Secret War to and why?

The Book of Mormon, The Naked Communist and The 5000 Year Leap. All these books highlight the conspiracies of groups who are seeking to overthrow the freedom of all nations and tells us that we need to focus on those who have been depleting our freedoms and replacing them with ruler's law. J. Reben Clark has said that there are only two forms of government, people's law and ruler's law. Skousen reaffirms this in his books and explains the importance of upholding politicians who believe in people's law.

It made me feel extremely pleased with my decision to vote for Reagan. I wish we had more politicians like him. I'm hopeful that freedom can be restored to the United States by our generation. The sooner the better. If we can do it sooner less blood will have to be spilled to defend ourselves and achieve a restoration of the United States Constitution.

It's perplexing to me that Reagan couldn't figure out why the Soviets were against SDI when the United States was planning to share the technology with them. To me it seems glaringly obvious. China and Russia intend to attack the United States and don't want us to have the ability to defend ourselves. They've clearly stated this goal over the years in statements I've read in the Las Vegas Review Journal and other publications.

In addition, the majority of government officials wish to overthrow our freedom and instill ruler's law with themselves at the head of government. We need to be prepared and stop voting for people who are taking our freedom away bit by bit. Reagan helped immensely but he didn't seem to be aware of the true intent of his enemies.

RR the most underestimated President..........we must understand that liberals know less than they think me thinks!!

MOST AMERICANS STILL HAVE NO IDEA HOW REGAN FOUGHT THIS SECRET WAR NOR DO THEY KNOW HOW SUCCESSFUL HIS STRATEGY DEVELOPED OVER A QUARTER CENTURY TURNED OUT TO BE. BUT THEY DO KNOW ABOUT HIS ALZEIMER'S AND MEDIA SPECULATION HOW MUCH OF HIS PRESIDENCY WAS IMPACTED BY THIS DISEASE. THIS BOOK SHOWS THAT HIS MIND WAS CLEAR WHEN HE LEFT OFFICE. MORE AMERICANS NEED TO KNOW HE WAS NOT A DODDERING OLD FOOL!

Very good book. Well referenced and well laid out. I always felt that Reagan was the one in charge and now we know . The press and the democrats always tried to belittle him. Look who looks small now. He was truly the man in charge. We need more Americans like him, especially now.