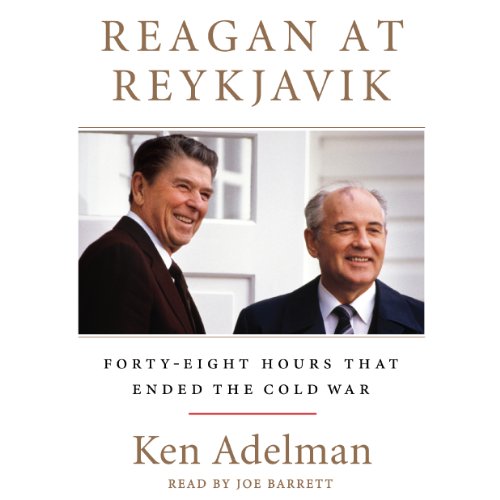 A dramatic account of the historic 1986 Reagan-Gorbachev summit in Iceland - the turning point in the Cold War - by Ken Adelman, Reagan's arms control director and a key player in that weekend's world-changing events.

In October 1986, Ronald Reagan and Mikhail Gorbachev met for a 48-hour summit in Reykjavik, Iceland. Planned as a short gathering to outline future talks, the meeting quickly turned to major international issues, including SDI ("Star Wars") and the possibility of eliminating all nuclear weapons. Both men were at the height of their powers, and they had a rare opportunity to move toward peace. The meeting led to negotiations and concessions that neither side had predicted - and laid the groundwork for the most sweeping arms accord in history, adopted the following year, and the end of the Soviet Union a half decade later.

From his position as a participant in these historic events, Ken Adelman is able to reveal the motivations, relationships, and conversations that led to the summit's breakthroughs. His analysis as both a participant and historian provides an invaluable perspective on this uniquely significant episode.

Scrupulously researched and based on now-declassified documents, Reagan at Reykjavik tells the gripping tale of the weekend that changed the world. Adelman provides an honest, laser-etched portrait of President Reagan at one of his finest and most challenging moments - and, indisputably, one of the most significant triumphs of his presidency.

What listeners say about Reagan at Reykjavik

Excellent account of the back and forth between Reagan and the Soviet’s . Really shines at the end of the book in regards to the aftermath and the rise of anti Soviet anti communist sentiments in Europe .

Wish everyone learned about this event more. I have been to Iceland and stopped by the location. Pretty amazing.

President in on it of oReagan - Eight great years!

President Reagan's optimism, vision and love for America were significant factors in the collapse of the Soviet Union. Truly a miracle!

This was a great telling of the Reagan years and the end of the Cold War. I didn't care for the narrator's style - apparently trying to sound like Reagan in a dramatic whisper like performance - but the content was very good and the book well written. An insider's look without the heavy bias you sometimes get in political storytelling.