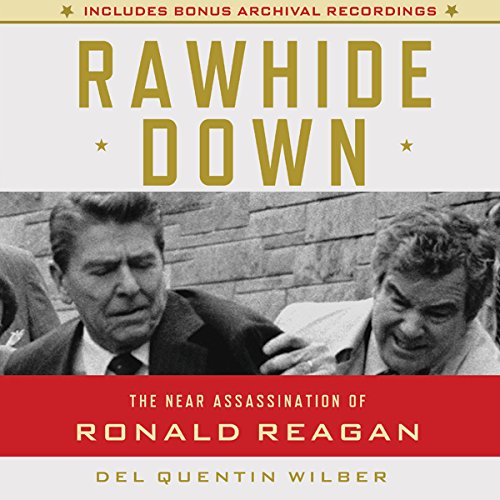 On March 30, 1981, President Reagan walked out of a hotel in Washington, D.C. and was shot by a would-be assassin. For years, few people knew the truth about how close the president came to dying, and no one has ever written a detailed narrative of that harrowing day. Now, drawing on exclusive new interviews, Del Quentin Wilber tells the electrifying story of a moment when the nation teetered on the brink of chaos.

With cinematic clarity, we see the Secret Service agent whose fast reflexes saved the president’s life; the brilliant surgeon who operated on Reagan as he was losing half his blood; and the small group of White House officials frantically trying to determine whether the country was under attack. Most especially, we encounter the man code-named Rawhide, a leader of uncommon grace who inspired affection and awe in everyone who worked with him.

Reagan was the only serving U.S. president to survive being shot in an assassination attempt. In Rawhide Down, the story of that perilous day--a day of chaos, crisis, prayer, heroism and hope--is brought to life as never before.

What listeners say about Rawhide Down

This is an uneven book about an American President I'd rather underrated - until now. It's emphasis flits from Secret Service agents, the President himself, his would-be assassin, Reagan's political team and the hospital medical staff. But the overriding impression is of the humanity (and humility) of the President himself. I now understand why he is such a popular figure there to this day.

Del Quentin Wilber spins quite a yarn with “Rawhide Down: The Near Assassination of Ronald Reagan”. This is a detailed telling of the story and a page turner at that. Wilber has, in the process, done a great service to readers by revealing current information about the attack not readily available at the time. The chapters on the attack, the trip to the hospital, the surgeons’ work and surrounding circumstances is particularly exciting. The author, to me at least, seems to admire Reagan and some who did not care for him or his policies might be put off. However, if one will just read the story much can be learned. The reading of Jason Culp is very good.

First of all, let me say that this was a fantastic read. Very, very interesting stuff.

The background information on Hinckley was very interesting. I knew the guy was enamored with Jodi Foster, but I had no idea that he had actually left things for her at Yale and called her and spoke to her at her dorm numerous times. The story of him "stalking" Jimmy Carter was also news to me.

The details surrounding the assassination attempt were very thorough, and told from various points of view. Reagan's sense of humor during the whole ordeal was something else. The book brought out a wide range of emotions for me, from sadness at the unfortunate outcome for Jim Brady to chuckles at Reagan's comments to the medical staff throughout his stay.

I was glad they had so much information and detail regarding Reagan's surgery itself, as it is always interesting to learn how doctors/surgeons make the decisions that they do.

The other big surprise is to realize how far we've come, technology-wise, since 1981. The inability to reach George Bush during his flight and other "communication" issues are almost unbelievable in today's world of texting, cell phones and the internet.

The only criticism is that the book is too short. I almost did a double-take in my car when the readers said "Epilogue.....". I couldn't believe it was over. I was very surprised that there was nothing written from Jodi Foster's perspective. Apparently the author didn't (or couldn't) interview her. And although the author described the early parts of Hickley's interrogation, there was very little detail after the authorities identified the motive for the crime.

As I stated at the beginning - a very enthusiastic thumbs up from this reader! Trust me - you won't regret reading this one......

Robotic narration makes this a bore.

The material is arguably exciting, regardless of how you feel about the politics, but the narration is totally flat. He might as well be reading the telephone book. Considering the potential of the material, this is very hard to understand. Read the book in print if you are interested, but don't waste your time on this dreary presentation. It really helps if you are an enthusiastic fan of Ronald Regan.

Adored this book from first word to the very last.

This is the story of the day that President Reagan was shot by a mentally ill young man who was trying to impress a young film star. It walks us through the whole day, taking us by the hand and walking us step by step, at the same time almost taking your breath away.
However this is not what was reported by the media at the time. If you were alive when it actually happened you will remember a completely different story. I seem to remember that it was highly sugar coated.
This is the true story backed up at the very end by the interviews with some of the people who were involved on that day which could have had s more horrendous outcome. Thankfully it did not.

This will go down as one of my top 50 favorite books of all time.

I remember very well hearing about the attempt on President Reagan's life. It was not a fun time for our country (Another Assassination???), but gratefully he pulled through the recovery from the bullet wound to his left lung like a champ. Over the years I have come to love and admire Ronald Reagan for the great man that he is. I know he was not a perfect president, but certainly the best one of the 20th century. I have been to the Reagan Library in Simi Valley, California, on the 4th of July, no less, and I've seen the section of the Berlin Wall that resides there. In many ways, he is my true hero. So I was more than interested in this account of his ordeal with shooter John W. Hinckley Jr. "Enjoyable" is probably not the right adjective to use with this kind of book, yet since I knew the outcome to be positive, it was in many ways enjoyable, and in all ways interesting, sometimes intense. I recommend this book for anyone who would like to know more about that fateful day in March, 1981, and more about Ronald Reagan the Man.

Very detailed review of the days surrounding the assassination attempt on Reagan. Very interesting to listen to from the insider POV. I wish they would have spent more time on the aftermath. It's covered in the Epilogue but it still leaves you wanting more.

Having lived through the assination of President Kennedy and the attempt on President Reagan's life, I looked forward to this book. The author shares the behind the scenes information of the assination attempt and the emergency medical treatment that President Reagan received. All of this, plus the political intrigue that unfolded, was fascinating. It's well researched and well told. I enjoyed this book very much and have listened to it multiple times, picking up details that I had missed. Well done!

Would you consider the audio edition of Rawhide Down to be better than the print version?

This reads very much like a fiction novel, though it is 100% historical. Consider this an apolitical collection of information about the attempted assassination of President Reagan - written in a riveting way that - if you enjoy this 'genre' as much as I - will become a definite re-listen

This story is extremely well told, interesting, and well read. I was glued to every word all the way to the end.

I really enjoyed reading this book, I always loved Ronald Regan and this book tells a great side of who he was