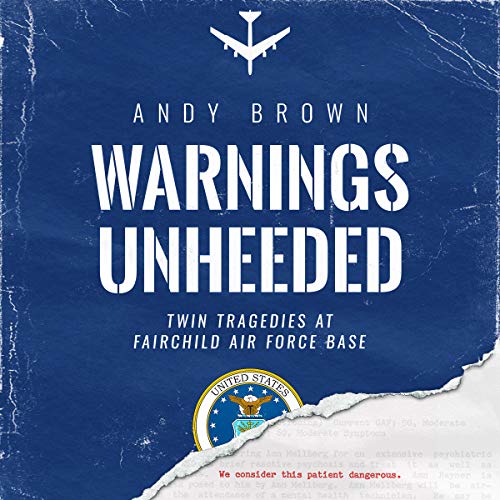 By: Andy Brown
Narrated by: Michael F. Cochrane
Try for £0.00

Mass murder and military aviation disaster. One community's experience with two fatal tragedies that occurred suddenly...but not without warning.

On 20 June 1994, a gunman opened fire on the patrons and staff of the Fairchild Air Force Base hospital. Four days later, a B-52 bomber with four souls onboard went down in a fiery crash. Hundreds of ordinary men and women experienced the tragedies...countless others had struggled to prevent them.

Everyone who met the would-be gunman thought he was odd, but the disturbed airman struck fear in those who knew him. Doctors had him committed to a military psychiatric ward, only to watch him slip through the cracks of a broken system. They warned their staff, "This is the kind of patient who...one day...he's going to come back and kill you."

A veteran B-52 pilot wowed the crowd at Fairchild’s annual air shows. But the men who had to fly with him shared tales of the reckless aviator routinely stressing the airliner-sized bomber and her crew to their breaking point. When their leadership failed to act, concerned aircrews said, "We predicted the worst air-show disaster in history when we found out that he was gonna fly."

Warnings Unheeded is compelling narrative nonfiction from former military policeman and criminal investigator, Andy Brown. Drawing from extensive research, and interviews with the people who witnessed the tragedies unfold, Brown captures their story with cinematic clarity. As the man who ended the killing spree, Brown reveals how he had prepared for the deadly gunfight and offers a candid insight into the hidden cost of becoming a "hero".

Warnings Unheeded is a story of courage and resilience, a true survival story and a lesson from history.

"A highly readable book...from a unique source. Recommended for a wide audience." (Ron Franscell, best-selling true-crime author of Delivered From Evil and The Darkest Night)

"In vivid and thoroughly researched detail, Andy Brown masterfully weaves two tragic stories ... this is an important and well-written read." (Gregory K. Moffatt, PhD, author of Blind-Sided: Homicide Where It Is Least Expected)

What listeners say about Warnings Unheeded

Name, Age and where they were born breaks the flow. Descriptions read like written by the same advocate. But then this is a memoire and a memorial in one. When he acts to stop the trauma - been there and agree - like taking in the world through a straw.
Mixed them. I did stay with it and drew from it in places. Worth a go, but you need to have been involved or be dedicated to get to tge end

My review of Warnings Unheeded by Ssgt Andy Brown

First of all let me state for the record I Have never met Andy and we are not related! We were both however USAF Security Policemen! We both were stationed at Kirtland Air Force Base at different times. I own and have read his book, several times over! In 20 years as an Air Force Cop I have never needed to either draw my M9 or chamber a round in my M-16! Andy not only had to draw but also engage an armed mass murderer at a USAF hospital! In addition it’s the story of an out of control AF B52 pilot responsible for the death of his whole crew at an air show at Fairchild AFB! His in-depth research is worthy of an NCIS episode! I whole heartedly recommend this Audio book! SSgt F. Brown USAF ret. 377th Security Police Group.

Incredible and informative. This book gives amazing insight and these tragedies and what we can do to try and stop them from happening again.

Andy Brown’s experiences are presented with a bold honesty that lets you begin to understand the frustration felt by many military and law enforcement personal, not only dealing with mentally ill personnel, but the system that ignores them or passes them on for others to deal with. The system that allows high ranking officers to be immune from guidelines intended to protect the safety of everyone is also frustrating. As a former USAF Security Policeman and police instructor I can relate to this book and acutely remember when it happened. I highly recommended all Security Police personnel, commanders, supervisors and those in the flying community read this book and heed the lessons presented! Furthermore, the training principles discussed by Andy are truly valuable techniques I have practiced and taught. They will improve police officers skills if taken seriously.

This is an important story to tell. Mr Brown does a perfect job of laying out the facts and the timeline. As leader, an Airman and a citizen these are very important lessons to learn. So many people could have broken a link in these chains of events. Thanks for writing this book. Be vigilant!

This book was addictive for me once i started i wasnt able to stop until the end. I use audible to listen to books due to eye problems,,most i listen to cant keep my interest and pause and come back to or just not finish cause boring,,this story was like being there and the detail made it that way. Im a local to the area but was unfamiliar with the real details of what happened at that time and also was young at that time. i hope to read more from this author.

Whether you are in the military, law enforcement or basically any other walk of life, you have been touched by tragedy, heroics, mental illness or bureaucracy. This book should be required reading for you. The amazing details in this book of the before, during and after of two very preventable tragedies is astounding. I have been to active shooter training and “Warnings Unheeded” put my mind into the scenario of an active shooter more than any other simulated munitions ever could have. Amazing book written by a truly amazing American.

A Book More People Should Be Reading...

Andy Brown's "Warnings Unheeded" is one of those rare books that have just as strong a message nowadays, as they did when they were originally published.

The book chronicles two tragedies at Fairchild Air Force Base within 2 weeks of each other in June of 1994: one a mass shooting at a Base Hospital perpetrated by a mentally deranged individual who managed to manipulate the medical system established within the military at the time to keep him enlisted; the other, a crash of a B-52 Stratofortress heavy-bomber (callsign, Czar-52) during a rehearsal flight the day before the annual Fairchild Air Show, the pilot of which being a chronically reckless individual who never resisted the urge to push the boundaries of the aircraft he flew- regardless of the wishes and wellbeing of not only his superiors and other higher-ups, but that of the fellow airmen flying alongside him. The failure of authorities to adequately prevent these losses of human life is hard to fathom, but from another point of view, were just results of a system of accountability that failed every man and woman on that base, up to, and including, the men who caused the incidents in question.

Brown's account of events is unique, him having been the person who successfully stopped the shooter before he could continue his rampage further. He lays down precisely what led to these two events, in maddening, brutal details, that will cause readers to question aloud why the leadership of a military installation failed to step in, when both of these individuals displayed serious signs of both mental instability and careless abandon for human life. At the same time, they will be answered with reasoning that will only be reminding of a key fault with any man-made system: the fact that they aren't always perfect. Mortal systems, even that of a military nature, never have been, and never will be... unless the process of accountability is upheld at the highest possible standards.

Like I said, this story is relevant. I really wish I read the paperback, there's way more material in the form of official documents, photos and diagrams showing the layout of the locations and where every event took place. It's worth listening to, but I, personally, would've gone with another narrator. That's my only complaint.

2/3 of the book is about the active shooter incident while the remaining part covers the B-52 crash as well as gets into the author’s struggles with PTSD, but demonstrates that no one is immune to mental illness. It was frustrating to hear how obvious the signs were in both tragedies, and goss to show a complete failure of leadership and the system. As a current active duty member, I think this is a great book for members to read in hopes that the same line of mistakes aren’t made again.