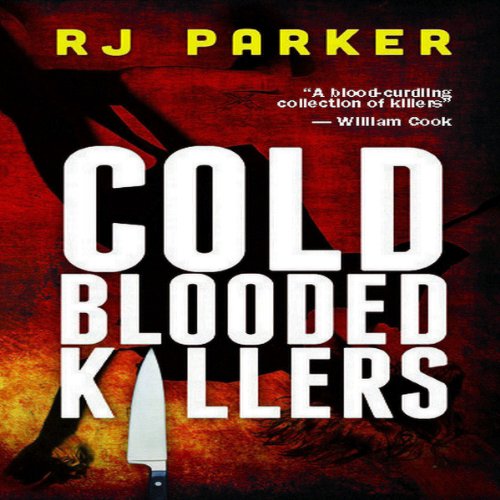 By: RJ Parker
Narrated by: David Gilmore
Try for £0.00

In this riveting audio, an award-winning Canadian author delves into the gritty, gruesome details of the most notorious spree killers, school shooters, and serial killers the world has ever seen. (Hear how Edmund Kemper decapitated his mother's head, used it as a dartboard, and then cut out her voice box and placed it in the garbage disposal.)

"Cold Blooded Killers is a blood-curdling collection of some of the most famous and the least known multiple-murder cases. I primarily bought this book as a source file for my own writing as I find the information to be well-informed and easy to read. The very human stories in this massive collection are filled with the tragedies of the victims' encounters with the abnormal criminals who most of us thankfully avoid in our day-to-day lives. Some very eclectic selections and some well-known cases are presented to us by a writer who is always striving to advance in his True Crime expositions. The thing I like most about this author's true-crime writing is that the victims are never forgotten and the murderers are not sensationalized but portrayed for what they really are, sociopathic cold-blooded killers." (William Cook)

They will feel that their own lives are over, and aim to take as many people with them as they can. Once their killing spree is over, they most often either commit suicide, or force the police to use deadly force against them, in other words, suicide by cop.

Cold Blooded Killers is a set case files, ranging from kids who killed their parent(s), to rampage spree killers, school shootings, and serial killers. This is the author's second collection.

Where does Cold Blooded Killers rank among all the audiobooks you’ve listened to so far?

Thats hard to say, My crazy obsession with True Crime has me listening all kinds of books

None most compelling, its fascinating to read true events.

What does David Gilmore bring to the story that you wouldn’t experience if you just read the book?

His voice was perfect for the story, I fall asleep when I read any books thats why I Listen to Audible. Thanks Audible!!!