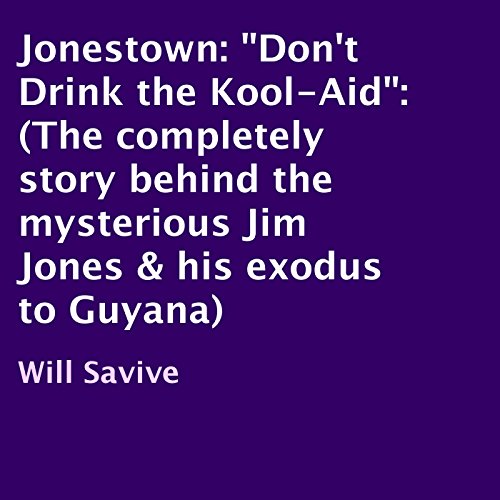 The Complete Story Behind the Mysterious Jim Jones & His Exodus to Guyana
By: Will Savive
Narrated by: Mark Moseley
Length: 11 hrs and 39 mins
Categories: Biographies & Memoirs, Religious Figures
5 out of 5 stars 4.8 (5 ratings)

By: Will Savive
Narrated by: Mark Moseley

In 1978, a tragedy occurred in the Guyanese jungle in South America: 918 American citizens allegedly took their own lives and Congressman Leo J. Ryan became the first U.S. Congressman killed in the line of duty.

The life and death of Jim Jones and his followers in Jonestown still mystifies people to this day. "Drinking the Kool-Aid" became a famous metaphor for holding an unquestioned belief without critical examination. But was there a far more sinister play at hand than the official story revealed?

This audiobook is a complete history of Jim Jones and People's Temple, with further analysis on what might have been the real cause of this tragedy. In the words of Oliver Stone, in regard to historical events, "What really happened is always subject to examination."

The grammar in this audio book is terrible, especially the second half of it.
The narrator is wonderful, he is easy to understand and speaks at a nice pace. However his wonderful performance is overshadowed by constant typos and poor sentence structure.
"Georgetown" and "Jamestown" are mixed up several times, phrases are repeated in sentences "this confirmed the worst case scenario for the newsmen... ...for the newsmen it was the worst case scenario."
There is even a typo in the mock book cover "the completely story of Jim Jones"
While the first part of the book is very factual and informative, after explaining the Jonestown incident the book descends into conspiracy theory

What disappointed you about Jonestown: "Don't Drink the Kool-Aid"?

I was hoping for more detail about the actual life in Jonestown. This book had alot of history before Jonestown, and the day of the murders. But I wanted to know the day-to-day lives of the people of Jonestown, and find out more about their thoughts and psychological motives.

Has Jonestown: "Don't Drink the Kool-Aid" turned you off from other books in this genre?

If you could play editor, what scene or scenes would you have cut from Jonestown: "Don't Drink the Kool-Aid"?

The very ending about the conspiracy theory.

A lot of what and not much why.

The book chronicles the events but never really explains why people behave that way. Not much thought is put into it besides the fantastic amount of research. The takes a bit of a conspiracy theory twist, which seems too reaching after what we just listened to.

In SERIOUS need of an overhaul

What disappointed you about Jonestown: "Don't Drink the Kool-Aid"?

I have always been fascinated by Jonestown. What would cause people to give up their lives, minds and bodies to this man? At first, I thought this book was well-rounded and informative, but the narration was flat, with mispronounced words (possibly due to misspellings in the printed text?) and graphic sexual scenes that seemed to be only there for shock value.
I read Julia Scheeres' "A Thousand Lives" and plan on reading "Seductive Poison", which I hope will bring humanity to this tragedy.

It actually did. But 12 hours of slogging through this text just didn't do it for me, especially with this flat (not monotone, just flat) performance.

The author does a credible job with a convoluted and mysterious subject. Very creepy overall.
Hard to separate the fact from conjecture, though. I'm more confused than ever.