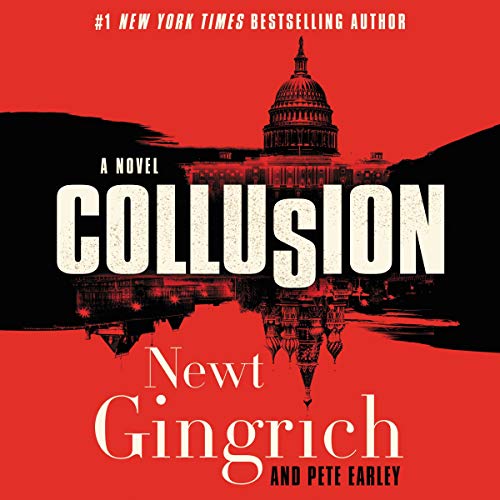 Number one New York Times best-selling author Newt Gingrich returns with this rollicking tale of high-stakes international intrigue - the first audiobook in a contemporary series filled with adventure, betrayal, and politics that captures the tensions and divides of America and the world today.

Valerie Mayberry comes from the kind of wealthy family that would be royalty in any other country. Obsessive and compulsive, she’s also the FBI’s counterintelligence expert on domestic terrorism.

Brett Garrett is a dishonorably discharged ex-Navy SEAL coming off a secret opioid addiction. A brusque, fiercely independent operative who refuses to play by the rules, the seasoned pro is now a gun for hire working as a security contractor in Eastern Europe.

When a high-ranking Kremlin official with knowledge of a plan to attack the US must be smuggled out under the nose of a kleptocratic Putin-like Russian president and a ruthless general, Mayberry and Garret are thrown together to exfiltrate him and preempt a deadly poisonous strike.

As these unlikely partners work to protect their human asset, their mission is threatened by domestic politics: leftist protests, Congressional infighting, and a culture riven by hatred.

Collusion raises many of the most significant issues facing America in real life today. Is Russia our ally or our enemy? Are American leftist activists susceptible to influence from aboard? How far will our enemies go to disrupt our politics and weaken the nation? Can we trust the media to differentiate between the good guys and the bad guys?

Newt Gingrich and Pete Earley have entertained and educated people with three previous novels of Washington scandal and foreign interference. From its explosive opening through several twists and turns to its heart-stopping end, Collusion is their most timely and powerful novel yet.

What listeners say about Collusion

Whilst Brett Garratt was a stoic hero and Mowbray a ever present trier, this was not Newts best offering.
Perhaps the narrators style didn’t help sounding more like a train station announcer than an interested story teller.
You can do better Newt and Pete

Loved it. I was listening in my car as I came to the end and the last paragraph had me wiping my eyes. I thought "yes, got the b×××××d"..

I purchased this book without even reading the publisher's summary. I enjoyed his last series so much. If you have not listened to the DUPLICITY series I recommend it if you enjoy action and espionage.

One of the protagonist's is a woman, Valerie Mayberry. She's an FBI agent on loan to the CIA. She's signed a Nondisclosure Agreement- to anyone. Including her own agency. She's working undercover and goes on a terrorist mission in the USA. She tells the leader that she'll do anything but kill. She doesn't kill, but people are killed during a demonstration she's involved in. She can do nothing because when she tells her CIA contact he reminds her of the NDO and the consequences she will face.
Brett Garrett, the second protagonist. Formerly a CIA operative. He had been sent to Cameroon to rescue an American woman kidnapped and held for ransom by local terrorist. He team found the woman right away but when Brett decides to also rescue other very young non American girls being held hostage and raped the mission goes sideways and his men were were wounded and lost.
Two years later, following a court martial and prison time , Brett is working for a private organization. Once again he's sent on a rescue mission. He's rescuing a Russian official and his grandson and again the mission does not go as planned. But he discovers an attack planned in the US.
But what does the Russian official have to do with the terrorists setting off bombs on US soil? You'll have to listen for yourself.
This book is fast paced with some very interesting believable characters. The storyline is plausible and in today's political atmosphere feels completely credible.
Eric Jason Martin does a fantastic job narrating.
This book has my HIGHEST RECOMMENDATION.
If you found this review helpful please indicate so.
Thank You.

We listened to the book in 3 evenings in a row. We loved it. Lots of action and suspense. Some very likable and some evil characters. We got a glimpse into the Capitol in Washington, DC from someone who has been there. They kept the suspense right to the end. Keep writing Newt. I can't wait to see Brett's name cleared and what the future holds for him and Valarie.

Narrator’s mannered and affected over-pronunciation became so annoying I had to stop listening, and will return to Audible. Read the Kindle version and enjoyed the story - contemporary and intriguing. Why do narrators often not understand that the First rule of good narration is to Not Get In The Way. sheesh

Not as great as Peter Kirsanow (another DC name that now authors thrillers)... but Eric Martin did a great job, the book was funny, filled with just enough action, and you like the 2 main characters. Never thought I’d be into a thriller by Newt Gingrich! Here we are!

Weak book in every sense

The ice cold narration by Eric Martin was a poor start to a boring formulaic novel. Will stick to historic and opinion books by Newt. No more novels 🙁

I spoke too soon. Instead of giving it a bit of time, I jumped the gun and wrote a harsh review without letting this come together. I always enjoy Newt Gingrich and his political commentary, so I had high hopes for this book. Starting out, it's slow and the narration is a bit rocky. But at the two and a half hour point, right at part II, it heats up like a blow torch. Today, in early June 2020, the world on every one's mind is Antifa. Antifa is dominating the news at every turn. This book centers around this leftist organization and terrorism. So, don't jump the gun as I did. Let it build to this point, and let the narrator work out the kinks. It's worth it. This book is proof that you can't judge a book by part one.

Collusion is a well written novel with plenty of details and suspense. There are several interesting characters including Brett Garrett an ex-Navy Seal and the Russian antagonists. The only negative was the narrator. Initially I thought it was going to be tough to listen to him due to his enunciation of words. He was very different, and didn’t seem natural. But I did get accustom to it after a few hours.

Once again a great story emerges from Speaker Newt. Really engaging entertainment. Have enjoyed all his books. This novel was no exception.

Considering Newt’s involvement I was expecting more. Aspects of the plot were were separate and loosely intertwined. The writing did not do justice to the concept.

I am a big Gingrich fan but found his latest book somewhat difficult to follow because of the time skipping back and fourth. Two days back, three months forward, 6 weeks back ... all very difficult and totally not necessary. All the drug stuff was also unnecessary as it had no relevance to the story. I finally reached a point about half way through that it wasn't worth continuing. Gave up ....returning book for credit.