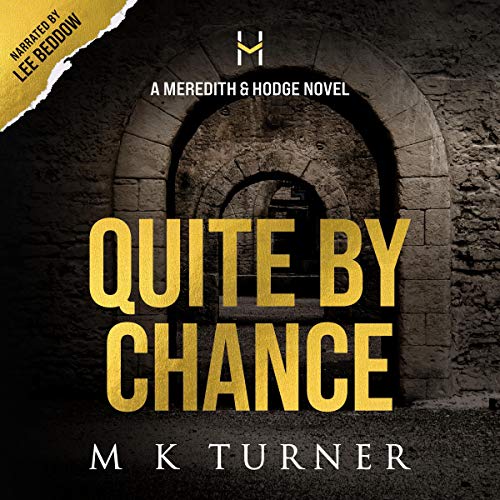 Meredith and Hodge are stranded up a mountain with two dead bodies and a murderer on the loose, Christmas is put on hold until they can catch the killer.

John Meredith has been coerced into joining a group of friends, in a castle on top of a mountain, for the Christmas holiday. His irritation at being dragged away from home soon dissipates, as he relaxes in the picturesque surroundings, enjoying the company of good friends. Even the sudden snowstorm is accepted without complaint; it will be a white Christmas. But then Patsy Hodge discovers a dead body in the salt box.

The murderer must be a member of the family who own the castle or one of the staff. No one can get into the castle or leave until they discover who that is.

The shock discovery of a second body reveals that either someone has keys to the castle, or an intruder is one step ahead of them. A trap is set to catch the killer before anyone else is murdered, but will it succeed?

Quite by Chance is a gripping murder mystery in MK Turner's popular Meredith & Hodge detective series.

Get your copy of Quite by Chance today, for an exciting story that will keep you listening right up to the unexpected climax.

What listeners say about Quite by Chance

Absolutely brilliant compelling with twists and turns on the edge of your chair intrigue, narration is brilliant as well

I enjoyed this audiobook though with some reservations I didn’t think it was as good as others in the series. I found some of the relationships rather difficult to work out.

Lee Beddow, is a great narrator and perfect for this wonderful book.

A great mystery , full of secrets and a surprise. We have a murder , a mountaintop castle, great characters and romance..
Oh yes a storm. Just brilliant.

Wonder story and a great series.

As always this series delivers a great story with wonderful descriptions and character development. highly recommended.

All the usual characters, but in a different setting. It's Christmas and Meredith is "on holiday" but as might be expected, it doesn't quite go to plan! If I had to pick a favourite in the series, it would be this one. Funny, emotional, page turning and I didn't guess "who did it"!!

My favourite book in the series so far.

M K Turner's fantastic writing again creates realistic characters that Lee Beddow brings to life expertly. My favourite character 'Peggy' is with Meredith and Hodge alongside all the other great characters, trapped in a castle together for Christmas. What could go wrong. Great writing keeps you gripped in this secluded environment.

Christmas in a Scottish castle

Having enjoyed every one of the series so far I found this one to be a little different, being set all in one place and as meredith himself said "very Agatha Christie".

I admit I had my doubts but they proved to be wrong as this story proves you can have a single setting with limited characters produce a thrilling tale. Meredith is on top form as always and all the usual cast are with him. The "suspects" were entertaining and well written, keeping us guessing until the end.

Peggy & Loopy Linda really shine in this one and Trump shows a more dominant side at times.

Lee Beddow gives a stellar performance as narrator, adding several new voices to his repetoire and nailing them perfectly.

I've now got my wife hooked on this series too. Can't wait for the next one.

I received a free copy of this audiobook from the authorat my request and am voluntarily writing an honest and unbiased review.

Love the further character development of Meredith's "family" and always happy to have Peggy more involved. She is a hoot and never fails to make me laugh out loud. Kept me guessing until the end as to who the killer was. I realize now that I read the last two books out of order, but it made no difference. As always, excellent narration by Lee Beddow.

pass on the holiday

What a holiday. I think I'd rather stay home. It made my blood boil how the killer rationalized their moves and actions. I was disgusted with the killer. Selfish and heartless! I voluntarily listened to a free copy of this and am giving an honest review. The narrator did a great job bringing it to life. Very emotional.

An exciting and new-to-me author and series

I had this on my wish and kept adding, removing, or skipping. So happy I finally purchased this book. Though it's part of a series this book is clever and immediately captivating and humorous... I was still able to enjoy it without the back story. Of course, now I want all the previous books and I am delighted the same skilled narrator reads them all.

The guests are in charge now!

This is one of my favorites! I loved having all the main characters together again.
Isolated in a castle, a murder, a pregnant woman about to give birth, secrets, what more could you want?
Peggy is such a no nonsense person and knows how to take charge and does not hold back- I still think she’s my favorite person.
The family that the story revolves around is quite interesting and any one of them could have been the murderer but which one did it?
Kept me guessing till the end.
I enjoyed Lee Beddow’s performance as usual!

Just when you thought you solved the mystery, another twist is revealed!

This was a wonderful book. The idea of Meredith and Hodge on holiday is a joke in any stretch of the imagination. The action, angst, and mayhem of this book in the series is alternately energizing and humorous. The fun part of this adventure is the increase in smiles and giggles I experienced while listening the masterful way the Lee Beddow once again brings MK Turner's talent to life. When isolated Meredith and his crew manage to piece together a messy crime and all its characters in a twisted way that kept me guessing from the onset. As always I am excited to see the next book but more importantly will Meredith finally follow through with his declaration. No spoiler read to see what I am referring to.