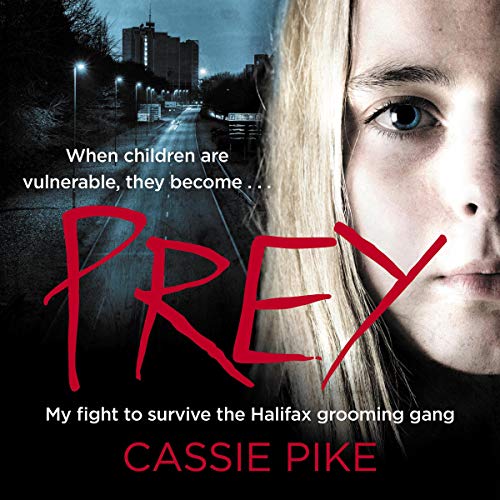 By: Cassie Pike,Katy Weitz
Narrated by: Lucy Price-Lewis
Try for £0.00

Cassie was only 13 when her mother died of a degenerative illness, leaving her vulnerable to sexual predators in the Halifax area who had been grooming her since the age of 11. She fell through the net of the care system and reached out for friendship, only to be consumed by an escalating spiral of abuse.

This harrowing and truly shocking story captures in vivid detail how gangs of men were able to ply a child with drink and drugs, then rape her and pass her around their associates with no one seemingly able to step in and prevent it. Cassie was lost in a world of appalling degradation for years before a local policeman and caring social worker became instrumental in helping her to escape and rebuild her life.

In 2016, the largest case of child sexual exploitation ever brought to trial at that time in the UK resulted in the conviction of 17 men. Since Cassie's abusers were jailed, child safeguarding policies have improved so that vulnerable children like Cassie should never again fall through the net and become prey.

What listeners say about Prey

LISTEN if you care about our children.

ALL stories of child abuse are abhorrent to most right minded people but at times I found it very difficult to listen to the horrific and enduring abuse suffered by Cassie starting when she was just a young child.
Many times I cried for her and raged with anger at the nature and level of the relentless and organised abuse which became Cassie’s ‘normal’ life. Many times I almost gave up because I couldn’t bear to hear it. I continued because it opened my eyes to a world I didn’t know existed, but knowledge is power and I feel empowered to have heard her story and truly believe ALL parents, grandparents, youth workers, teachers or anybody responsible for the welfare of our children should read Cassie’s shocking story. Thank you Cassie for your bravery.

get this book,
l was hooked straight away,
is a hard hearing some bits at time's, how children's life's can be so difficult, how strong you can become.

Excellent book,shocking but shows that people can turn theyre life around.Inspirational & the narrator is brilliant,will look for more books by this narrator.

A very sad but compelling read.

This read brought tears to my eyes but I couldn't stop listening. What this young girl went through is harrowing and to think this continues to happen is totally beyond me. Cassie, you are one amazing woman. Thank you for sharing your story and if it's helped just one other girl by enabling someone to recognise the signs, then you have achieved an incredible thing.

I've often wondered how these girls were groomed and convinced to participate. This book details the sordid process well and is just a horrific account of a kind-hearted young girl who was failed by the authorities and horrifically used by monsters. Difficult to read at points but every; police officer, social worker, local council 'Do-Gooder' should be made to read this book. Highly recommended

what a brave young lady

glad this young lady got justice, shame it will haunt her forever. These men need to be put to death, the damage they cause.

A brilliant, yet heart wrenching story. Emotional but shows the true strength and courage this girl went through. Bravery at highest. highly recommended.

I come from Halifax and didnt know the full details of this case. I am shocked and sickened. well done beautiful lady for un earthing this

So hard to listen to, and to think that this still happens to children even today. But so well written and so brave.