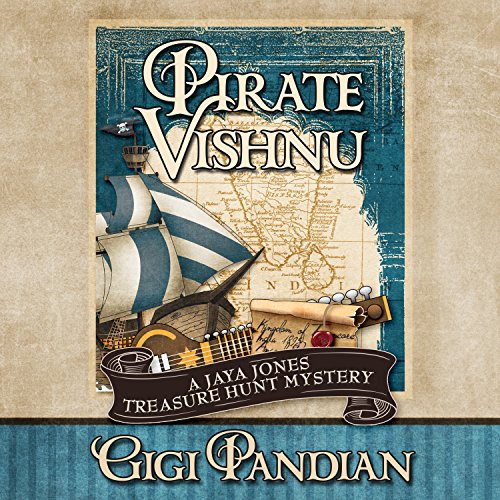 Shortly before the Great San Francisco Earthquake, Pirate Vishnu strikes the San Francisco Bay. An ancestor of Jaya's who came to the US from India draws a treasure map.

Over a century later, the cryptic treasure map remains undeciphered. From San Francisco to the southern tip of India, Jaya pieces together her ancestor's secrets, maneuvers a complicated love life she didn't count on, and puts herself in the path of a killer to restore a revered treasure.

"Through her effective use of a parallel historical narrative, the author streamlines an intricate plot." ( Library Journal)

What listeners say about Pirate Vishnu

I'm sick of Jaya's simplistic way of looking at the world and the people around her. She takes everything and everyone at face value and is then shocked when she realizes that others have ulterior motives. The story was summarized over and over in almost every chapter and the characters are completely unrealistic. The story of Jaya's pirate uncle was more interesting than the story itself. I will not buy the next book in the series.

I really liked it!

I may have been just a bit generous with 5 stars, but 4.5 wasn't a choice. Surprisingly (to me), I truly enjoy Jaya Jones mysteries. Not too heavy, not too light, just a fun read.

This was a thrilling Treasure Hunt that Jaya was presented with. Finding a long lost treasure and restoring the reputation of her family's hero were impossible to resist.

I enjoyed the alternating POV(Points of View) between Jaya and her great-granduncle Anand.

While understanding why he did it, I was sad that Lane left Jaya for her own good. I was tickled that he couldn't help but want to protect her afterwards. I loved the way that Jaya put him told him exactly what she thought of his unilateral decision to end their relationship. These two are an entertaining pair.

I really enjoyed the narrator!

Great story, interesting mystery, tons of fun history to boot. I enjoyed Pirate Vishnu very much The story moves along at a good pace, with no boring bits in between. The characters were engaging and entertaining.. It had the right amount of fun, suspense and intrigue. Jaya Jones is a very capable heroine. I am really enjoying this series.