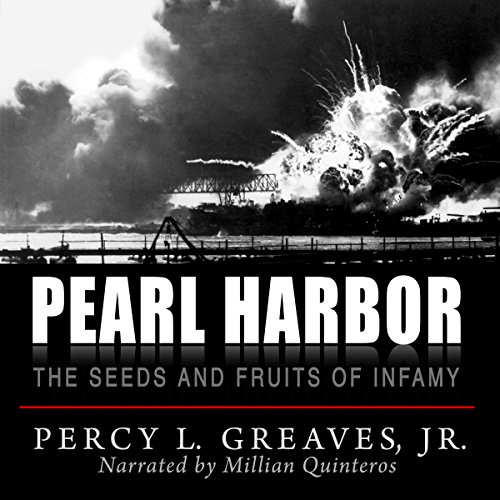 Pearl Harbor: The Seeds and Fruits of Infamy

Pearl Harbor: The Seeds and Fruits of Infamy

This book by the world expert on Pearl Harbor blows the top off a 70-year cover-up, reporting for the first time on long-suppressed interviews, documents, and corroborated evidence.

The bottom line thesis: that the attack December 7, 1941 was not unexpected or unprovoked. Nor was it the reason that Franklin Roosevelt declared a war that resulted in massive human slaughter. Instead, as this book establishes in exhaustive detail, Pearl Harbor was permitted as a public relations measure to rally the public - and the blame shifted from the White House, where it belonged, to the men on the ground, who were unprepared for the attack.

The author is Percy Greaves (1906-1984). For 70 years, his documents have been the primary source of revisionist scholarship on Pearl Harbor. The documents were prepared under his leadership by the minority on the congressional commission that investigated Pearl Harbor from 1945 to 1946, because he acted as the main counsel for the Republican minority.

He conducted in-person, detailed, comprehensive interviews with all the main players at Pearl Harbor and many people in the security apparatus. The contents of these interviews are corroborated by military records. More than any other person, he was qualified to speak on this subject. He possessed encyclopedic knowledge and had access to research available to no one else.

However, for many reasons, the documents were not published. He continued to work on this book for many years before his death in 1984. At that point, his wife, Bettina Bien Greaves, took up the project.

The result is absolutely astonishing. The scenario it describes is not unknown even in our own times. A brutal attack on American soil comes from a foreign source. Death and destruction are everywhere. The nation is furious and thirsty for vengeance.

Excellent details if you want a reference