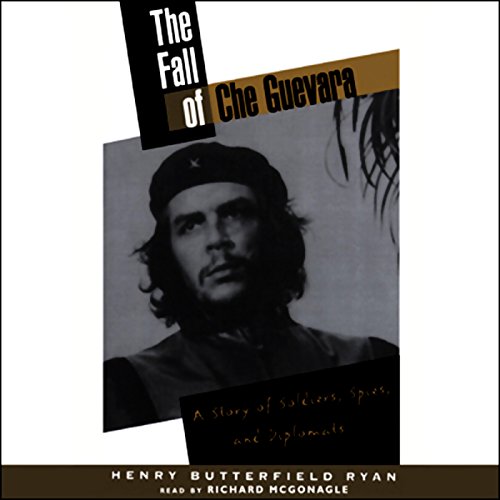 The Fall of Che Guevara

A Story of Soldiers, Spies, and Diplomats
By: Henry Butterfield Ryan
Narrated by: Richard McGonagle
Length: 7 hrs and 17 mins
Categories: History, Americas
4.3 out of 5 stars 4.3 (7 ratings)

The Fall of Che Guevara

This book tells the story, for the first time, of the United States government's response to Guevara's ill-starred insurgency in Bolivia in 1967. Henry Butterfield Ryan argues that Guevara's life must be re-evaluated in light of secret documents only recently released by the CIA, the State Department, the Pentagon, and the National Security Council.

Ryan's dramatic account of the last days of Che Guevara is sure to appeal to scholars and students of United States foreign policy, Latin American history, military history, and to all others interested in this modern revolutionary's remarkable life.

" The Fall of Che Guevara has the merit of being both original and brief. It consists largely of a trawl through the American archives, in the wake of the Freedom of Information Act, to discover what the various U.S. government agencies really knew, and thought, and did about Guevara." ( London Review of Books)

What listeners say about The Fall of Che Guevara

A even handed critic

This book takes the overview from the American perspective but is still strangely - if not warm - at least not damning of Che. It's a fair and even handed critique of what Che got wrong, what he Bolivians cocked up and what the Americans were up to....and shows the flaw conspiracy theorists all ignore...human error happens at every level.

Fascinating account of one of those now almost forgotten episodes of history concerning a man whose heroic status is seemingly maintained right into the 21st Century. Obviously a feat of dogged research the analysis seems even-handed and the writing elegant. Well read with appropriate ironic authority.

Good coverage of material and facts without getting lost in arguments. I think this book would be enjoyed by anyone regardless of their feelings about Che or the CIA. I think it was fair and not meant to politicize. Very interesting.

This is an interesting story of the subject albeit from a US government viewpoint. What detracts from the overall experience is the reader who under-emphasises the ends of sentences so as to make it often hard to understand in the sometimes inevitably noisy backgrounds where one listens to talking books(e.g in a car.) Still a worthwhile listen for those interested in Che Guevara.

Nothing to do with Che!

Not worth your time. The author claims poverty in a far too lengthy introduction and then preceeds to tell the story as the US goverment would have you see it. There is more character development of actors that had nothing to do with the account than with the major players. My guess is that Mr. Ryan got paid on the side to write this.