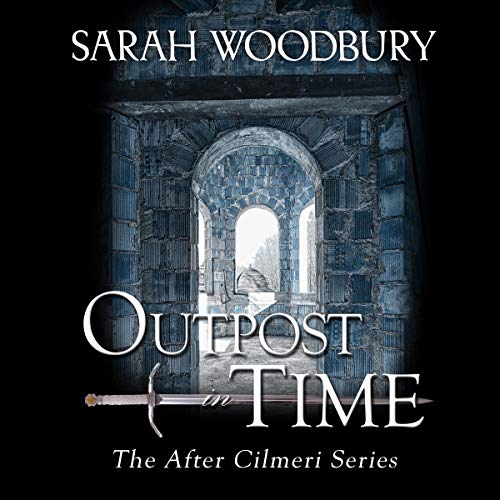 By: Sarah Woodbury
Narrated by: Laurel Schroeder
Try for £0.00

March 1294. Ireland is at a crossroads. The different factions - Irish, Danish, and English - are tearing the country apart with their constant warfare. Hoping to hammer out a treaty, David calls the Irish Parliament into session. Unfortunately, some lords are far more interested in fighting than talking, and it isn't long before the conference goes awry. With the future of Ireland at stake, David finds himself caught up in a far-reaching conspiracy that puts not only his own life on the line, but his family's as well.

What listeners say about Outpost in Time

I came for the romance and stayed for the battles

I came for the romance, the history, the geography and surprised myself by staying for the battles. When the reader gets so involved in the characters' lives, and those lives lead into battle, it's impossible not to feel personally invested in the outcome.
For me there is an extra tug in having much of the action set in my homeland of Ireland, but no matter from where the reader they will be gripped by story and the storytelling as King David's cousin Christopher time travels, instantly becomes The Hero of Westminster, and subsequently earns the kudos, proving his worth to himself and everyone else.

What made the experience of listening to Outpost in Time the most enjoyable?

Once again a brilliant book from Sarah. Really, really love this series, so much so that i never tire of re-reading or listening to over and over again.

Meg, because she is so strong

What does Laurel Schroeder bring to the story that you wouldn’t experience if you had only read the book?

She brings it to life

A fantastic read and listen, cant wait for the next one.

People can be predictable...or not!

so many accents! I have no idea if they are correct, but they are consistent. Enjoyable story. Ready for the next one!

I have enjoyed The After Cilmeri series, going from one exciting story onto the next. I love how intricately they are woven, and now that I'm several books along - I'm remembering characters and situations from the first ones as they appear! THIS book Outpost in Time went by so fast! I was in the last chapters before I knew it. Sarah has created a fascinating story and tells it in a format that I also enjoy - having each chapter be a different character's experience/voice is cool! Laura Schroeder is excellent in her delivery giving each voice a different inflection that you will recognize who is speaking easily. I recommend Outpost in Time as I do all of the previous books in this series! And now off to explore Shades of Time!

I would recommend reading the book - not listening to the audible version. The Narrator does not articulate her words crisply - she almost sighs at the end OF EVERY WORD. It's almost like she doesn't want to ready the story or she's trying to be "husky", like this is a sex story and it's not.

Would you be willing to try another one of Laurel Schroeder’s performances?

NO. I would not to like to listen to the narrator every again. Her sighing at the end of every word is like fingernails running down a chalkboard.

Was Outpost in Time worth the listening time?

No - the narrator is terrible.

Great book for the series about the family that travels back in time to create a different world.

GREAT STORY. READY TO TRY MY IRISH LUCK IN TIME

NOT REALLY FIGURE OUT HOW TO DO IT GIVE ME A YEAR-AND-A-HALF TO GET READY AND I WILL TAKE UP A POST IN THIS TIME FRAME SOUNDS LIKE FUN. REALLY I DON'T MEAN AS IN VIDEO GAME FUN LAST VIDEO GAME I PLAYED WAS THE ORIGINAL MARIO BROTHERS DECADES AGO. BUT I AM AN ENTHUSIASTIC LOVER OF MEDIEVAL HISTORY ESPECIALLY IRELAND, WALES, ENGLAND AND SCANDINAVIA. THE WRITER HAS A GREAT UNDERSTANDING OF THE PEOPLE, TIMES AND CULTURES.
THE STORY IS WELL WRITTEN AND EASY TO FOLLOW. IT IS ALSO ACCEPTABLE FOR PEOPLE OF ALL AGES.
THE NARRATOR LAUREL SCHROEDER IS GREAT AND EASY TO FOLLOW.

The narrator should not try to do a man's voice with an accent if she can't do the accent on a female voice. I found this narrator's cadence and speed annoying. I couldn't listen to the book past the first 10 minutes. Very disappointed.

I thoroughly enjoy the After Cilmeri series. Having someone reading aloud as I read the text enhances the book for me especially pronouncing the Welsh and Irish words. Sarah's books have captivated my imagination since I read the first book years ago, and never disappoints me.

I'm not happy with her reading of this book.

Laurel Schroeder reads all of these After Cilmari books. For the most part she's quite tolerable. I would not say that she's my favorite reader. I'm happy to know the proper pronunciation of the Welsh and Gaelic words. But I do not like her reading of this particular book. It's very choppy and breathy, if those two words should even be used in the same sentence. She doesn't sound like this in her reading of all the other books. I'm not giving a rating of the book here, although I love all of these books for the most part, there are a few things that I think are silly or unreasonable, but for the most part I think they follow a logical progression. So this rating is actually just for her reading. And I think she needs to read more smoothly, don't trail off weirdly at the end of words and don't be so breathy.

I have thoroughly enjoyed every book I have in this series. They always leave me wanting more.