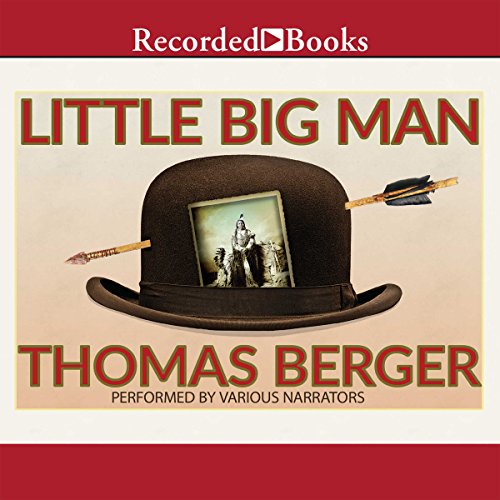 The story of Jack Crabbe, raised by both a white man and a Cheyenne chief. As a Cheyenne, Jack ate dog, had four wives, and saw his people butchered by General Custer's soldiers. As a white man, he participated in the slaughter of the buffalo and tangled with Wyatt Earp.

Throughly enjoyed this book and would definitely get the sequel in the future.
The narration really adds to this whimsical historical fiction. The writer is having fun and he throws in plenty of well known wild west characters yet the story is quite strong and has you in an array of emotion in amongst the humour.
Worth a listen without doubt.

I loved this tale first time I read it and enjoyed the performance. A great story read and performed well

It's a Good Day to Listen

There is one quality in an audiobook that transcends all others, regardless of author, genre, subject, etc. That is when the voice in your ears surpasses any voice you could imagine in your head. Little Big Man is a tall tale almost entirely spun by former Old West frontiersman Jack Crabb as a 111-year-old man, so the narration is crucial, and Scott Sowers just totally, absolutely nails it, maintaining the idiosyncratic voice of his character for nearly 20 hours.

Jack Crabb was there. Everywhere. Raised by the Cheyenne after his father's wagon train was overrun, reclaimed by a white family as a teen, and in subsequent years: shopkeeper, muleskinner, trader, buffalo hunter, card sharp, gunslinger, prospector, dandy, town drunk, teamster, and ultimately scout. He returns several times to the Cheyenne to resume his role as legendary warrior Little Big Man. Along the way, he runs into people he met before, like General Custer, Wild Bill Hickok, Wyatt Earp, Calamity Jane, Buffalo Bill Cody, et.al. In the end, he is the only white man to survive the battle of Little Bighorn.

This is revisionist history. Published in 1964, Little Big Man was one of the first books about the West to take the point of view of the Indians, to show their lifestyle in a sympathetic light, explaining practices that would seem savage and primitive to white settlers. To the credit of Thomas Berger, he shows all viewpoints in all their complexity, but clearly emphasizes that one side, the native side, took the worst of it as the relentless tide of American expansionism overran their lands. He also takes some time to reexamine the image of women, blacks and homosexuals -- way ahead of his time on all fronts

This is one my favorite books (first read in the early 80s) by one of my favorite authors (read every one of his books), and the 1970 film version with Dustin Hoffman as Jack Crabb is one of my favorite movies. I will argue witth anyone who says otherwise that all three -- book, movie, author -- are among underrated or unheralded classics that deserve more attention. So yeah, I'm biased. But the narrator could have soured it. Sowers enhances it so that I can now add one of my all-time favorite audiobooks to my list.

A word of caution. Written in the early 60s, before the term political correctness entered our lexicon, the language can be challenging. No profanity and no slurs directed at blacks or homosexuals, but plenty of cringeworthy descriptions and namecalling of Native Americans, as would befit someone like Jack who grew up with that language. No one can walk away from this book believing that the name of Washington's NFL team is anything but the worst kind of racial slur (unless they change to their logo to a red potato).

Classic yet fairly realistic tale of the old west

This is the story of Jack Crabb who's Cheyenne name is Little Big Man. It is told as a flashback of Jack as an 111yo man. It is an enjoyable recounting of the plains region circa 1850-1876 culminating in the battle of the Little Big Horn and Custer's last stand. The first half of the book is outstanding mainly focusing on Jack's time as a boy living with the Cheyenne after being adopted by the tribe. The descriptions of native american customs and lifestyle is realistically portrayed and quite interesting. Much is said about how native american ways and philosophy differs from "the whites". I always find this interesting to read about. The second half of the book is good but less interesting, sometimes being a tad long winded. There is a lot about frontier life and the life in early plains cities like St. Louis and Kansas City.

Narrator does an excellent job and gives the story an authentic feel.

If you like history of the American west, and a rip snortin yet profoundly beautifully told story by a narrator that will have you believing he is actually the character, then this is for you. It was my favorite audio book listen so far to date - and I have listened to countless books.

This is a genius work, an American masterpiece, historically accurate, well-told fiction (?), funny, worthwhile. Be sure to stay for the prologue and commentary. See the movie, too, but get the full dose here!

I last read this tale 45 years ago. I found it once again irresistible. I plan to read it again 45 years from now!

Loved it! Having grown up in South Dakota, I welcome any fiction or non-fiction that covers the natives or non-natives interaction and lives. This in particular is one of my all time favorites!

Everyone should read this book.

This book should be required reading. It's a great story taking place in an amazing time in American history amongst some important American figures. This book is a classic.

I thoroughly enjoyed this book The narration was very very good and how can you not enjoy the story. I'm sure everyone has seen the movie but the book is always is better.

This was a movie I wasn't allowed to watch when I was young. My parents were great. The book was just as great as I knew it would be.