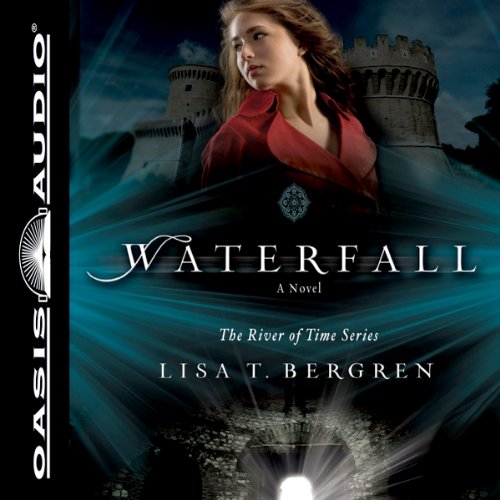 What do you do when your knight in shining armor lives, literally, in a different world? Most American teenagers want a vacation in Italy, but the Betarrini sisters have spent every summer of their lives among the romantic hills with their archaeologist parents.

Stuck among the rubble of medieval castles in rural Tuscany on yet another hot, dusty archaeological site, Gabi and Lia are bored out of their minds... until Gabi places her hand atop a handprint in an ancient tomb and finds herself in 14th-century Italy. And worse yet, in the middle of a fierce battle between knights of two opposing forces. Suddenly Gabi’s summer in Italy is much, much more interesting.

What listeners say about Waterfall

I've read this book ages ago and when I saw that it was in a audiobook I brought it straight away, as I really enjoyed the book! If your looking for action, danger and romance with a bit of comedy mix in. I urge you to give waterfall ago.

If you're a fantasy fan looking for something a little different, this one is worth a try. Waterfall is the story of Gabriella, a 21st century teenager transported to 14th century Italy while on a visit to an old hystorical toomb with her family. Gabriella finds herself plunged into a war between two fighting dinisties. As she adjusts to her surroundings and searches for a way home, she is inexpliccably drawn to one of the knights. This was a lively, engaging story with a likeable heroine, colourful descriptions and plenty of action. The author paints a vivid portrait of life in medieval Italy. A good book to while away an afternoon.

Ok, so I only make comments when a particular book/series is just awesome. I love the way Lisa Bergren enthralled me into this historical fiction, incredible love story, totally funny series! Yes, it is cheesy at times but what 14th century knights are not a little cheesy when it comes to love...especially in Italy! If you love a love story, great action and a little funny, this book is for you! I am so happy that I picked this treasure up! I realized, with all the distopian novels I have been reading that sometimes are a really sad, OK, a lot sad, this book was just refreshing! I guess I can say that when I read a good book/series that I cannot put down and laugh along the way and feel happy love....it is a winner! Some other reviews say that Pam Turlow (the narrator) was not that great...l beg to differ. She puts in some great talent here. Her Italian is wonderful and brings the story to life! Her voice is a little deeper than most 17 year old, high pitched, annoying voices, so it was fine with me. All I can say is....THIS WAS AWESOME!

Love the story, but not the narrator

Would you listen to Waterfall again? Why?

Yes; because i like the story. I'm really into that type of literature, and i love the characters and how well Lisa draws you into the time period. However, one reason i would not listen to Waterfall again is because the narrator is not really that talented, in my opinion. I grew up with Jim Dale, and so maybe i'm a little picky, but i don't think she thought out the voices beforehand. She makes Lia sound like a ditzy airhead, and Gabi sound like a bratty teen. Her voice is really hard to listen to for long periods of time.

I love the characters and the way they come to life. The author has a way of making the characters relatable and intriguing.
Also, Lisa Bergren really knows the time period. The details she adds to the story make it clear that she is really knowledgeable about the era.

Kind of. Like i said earlier, i didn't really like the narrator, and i didn't think she was right for the book.

This is a PG-rated bodice ripper dressed up in time traveller clothes. I found it on a list of novels to read if you liked Outlander by Diana Gabaldon. I am sorely disappointed. The premise is cool; two American sisters on an archaeological dig with their professor mother touch a mural in an Etruscan tomb in Italy and are transported back in time. Except they go to medieval Siena instead of ancient Etruria. And the main characters somehow manage to use medieval weapons with skill despite having trained only with modern fencing epees and archery equipment. And they luckily just read the Divine Comedy in the original Italian, so they can communicate fluently with people in the time period. Breezing over these giant plot holes that could be really cool and scientific or maybe have deep archetypal meaning, the main character instead chalks it up to God (even though she has never been religious or ever even prayed) and glibly falls lustfully into hormonal infatuation with the only attached young man in the story. This directly results in her being poisoned by the spurned fiancee, so conveniently the sisters escape back to their own time and are magically healed from physical ailments, but not from their pedantic teenaged inner monologues and sarcasm. It's a series so I'm sure they'll go back in time again, but I won't waste my time on it. "What-everrrr."

Great story and performance. The only bad part, the annoying music between chapters that is at a louder volume than the narration.

The story and the writing of this book were great- I got sucked in at the beginning and was extremely eager to find out what would happen next. The concept of the plot- time travel to 14th century Italy- was really interesting to me.
However, I thought the narrator's voice was annoying. She was exaggerated, over the top, and cheesy at times- I found myself rolling my eyes or cringing throughout the book. I think a younger narrator would have been better suited for the reading of this book (since the main character is 17 and uses several expressions that only teenagers would use). I especially disliked her voice of Gabriella's younger sister- it was high pitched and whiny. The narrator did do a good job with the Italian men's voices, though.
All in all, despite my dissatisfaction with the narrator, I found the book enjoyable and will definitely read the next book in the series to find out what happens next! I hope the audiobook for the next books in the series will be available soon (hopefully with a younger narrator).

I loved this story but the narration was poor and therefore made me not want to listen at times. I finished and enjoyed the story. I want to read book 2 but is dreading the narration.

I've read all the books that have come out so far. They are heart-throbbing and heart-stopping addicting. I've decided to listen to them as I prepare for the next book release. I was lukewarm about the narrator at first, but she did a good job. I find the musical interludes between the chapters annoying and eventually just plain corny. Annoying because the author likes to write cliffhanger last sentences to her chapters. Overall, it was worth suffering through the music to listen to this great story.

Cliche and thoroughly underwhelming. When characters behave in ways that ignore laws of cause and effect it detracts from the story. It causes the reader to be unable to suspend belief in a fantastical storyline and that is what happens with this book. It all starts promisingly enough with two teenage sisters Gabi and Lisa, exploring a discovery of their archeologist mother. The girls trigger handprints which send them back in time. Then the story becomes ridiculous. The oldest sister, Gabi, lands in the middle of a medieval battle and what does she do? She raves about the looks of a knight she sees, even when she notes that something might be a little wrong with the battle she is witnessing. The battle turns out to be real, with men dying in front of her. Still she fixates on the looks of the handsome knight. Shallow and clueless does not make for a good book. Narrator Pam Turlow is excellent....if she were reading a different book. The book is written in the first person by Gabi, but Turlow???s voice is too mature for a teenager except when she is doing dialog. Her dialog ???voices??? sound like the teenagers they are supposed to be, but the switch back and forth from ???teen??? and ???mature??? becomes tiresome and a distraction. The story ends on a ???cliffhanger??? but I won???t be looking for it, I just don???t care enough to find out what happens next.

Narrator was good at adding the right emotions to her voice matched story well, finished in 3 days couldn't put it down (or press pause) cant wait to read rest of the series

one of my favorite series ever! wish they never ended! hoping they put the books after this trilogy on audio. great reader!