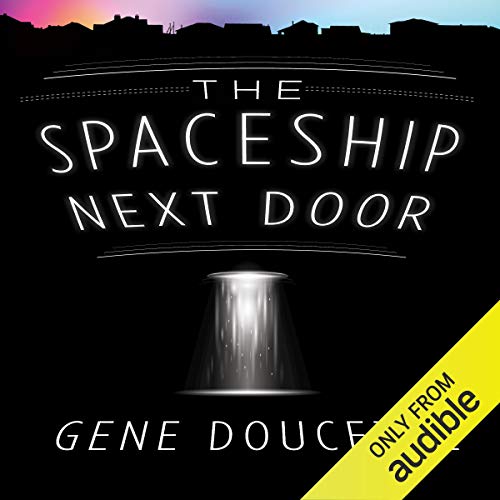 The Spaceship Next Door

The Spaceship Next Door

The world changed on a Tuesday.

When a spaceship landed in an open field in the quiet mill town of Sorrow Falls, Massachusetts, everyone realized humankind was not alone in the universe. With that realization everyone freaked out for a little while.

Or almost everyone. The residents of Sorrow Falls took the news pretty well. This could have been due to a certain local quality of unflappability, or it could have been that in three years the ship did exactly nothing other than sit quietly in that field, and nobody understood the full extent of this nothing the ship was doing better than the people who lived right next door.

Sixteen-year-old Annie Collins is one of the ship's closest neighbors. Once upon a time she took every last theory about the ship seriously, whether it was advanced by an adult or by a peer. Surely one of the theories would be proven true - if not several of them - the very minute the ship decided to do something. Annie is starting to think this will never happen.

One late August morning, a little over three years since the ship landed, Edgar Somerville arrived in town. Ed's a government operative posing as a journalist, which is obvious to Annie - and pretty much everyone else he meets - almost immediately. He has a lot of questions that need answers, because he thinks everyone is wrong: The ship is doing something, and he needs Annie's help to figure out what that is.

Annie is a good choice for tour guide. She already knows everyone in town, and when Ed's theory is proven correct - something is apocalyptically wrong in Sorrow Falls - she's a pretty good person to have around.

As a matter of fact, Annie Collins might be the most important person on the planet. She just doesn't know it.

The Spaceship Next Door is the latest novel from Gene Doucette, best-selling author of The Immortal Trilogy, Fixer, The Immortal Chronicles, and Immortal Stories: Eve.

What listeners say about The Spaceship Next Door

would listen to again

loved it . many times laughing out loud in the car . annie outlook is great and is someone i know anyone would love to meet and chat to even without a spaceship about .

Entertaining and a different take on first contact with aliens. It's never going to be a classic, but I'm happy I read it.

Unimpressed with this poor tale. Not much enjoyment and wish i had left it alone 😕

I'm 50 years old and keep getting YA books

Whenever there is a sale, I usually pickup several books that I normally wouldn't waste a credit on. Doing this, I keep stumbling across books that were obviously written more for young adults like The 5th Wave series, Mithermages, The Ender Series, The Eragon Series, and Hunger Games Series. This is another winner in that genre. This was an engaging book with some twists and turns. The main character was a bit overdone, but she was engaging and if not 100% believable, she was entertaining. I'm not giving up my Zombie Apocalypse, military science fiction, or hard-core science fiction any time soon, but this was a pleasant change. Please note that I only gave the narrator 4 stars. He was very good, it’s just that he didn’t distinguish himself as one of those awesome narrators or narrator-groups you look for because they add so much to the story, but then again, he did an very good job and did not weaken the story. I would definitely listen to him again.

It took me a while to finish this audiobook. I kept losing interest and starting other books. But every time I looked at my library, there it was; waiting, mocking me. I finally gave in and picked it up again, hoping for a satisfying payoff at the end. Sadly, this novel didn't deliver.
Besides a less than satisfying resolution, my biggest complaint is the narrator. Mr. Carlson has a very pleasant and soothing voice and smooth delivery but would be much more appropriate as the narrator for a Hallmark Christmas movie than a sci-fi novel. The main character is a 16 year old girl that sounds like a 60 year old grandpa ever time she speaks. I never could get past that. Also, during the most action packed and harrowing parts of the story, the soothing voice never changed. No fear, apprehension, or excitement ever found it's way into the narration.

Dull. Nothing happens until chapter 17. Then what happens is dumb.

Wrong choice of narrator. It’s an older man when most of the book is the inner monologue of a 16 year old girl. The fictional town is described in painful detail. And the author seems to think one should always use 20 words when 2 would do. I don’t get the positive reviews of this book. It was at best a short story with 2/3s filler. When something does finally happen, it’s just dumb.

Another fun Sci Fi read with an Excellent Reader!


If you enjoyed Not Alone, you should enjoy this one, too. It has the same real-time pacing, UFO subtext, and a fascinating lead character. The story takes place in a small town, and has a host of locals and others who bring a folksy humor to the tale. But where Dan Macarthy was an introverted loaner with a UFO fixation, Annie is clear eyed, intelligent, and always sensible -- no matter what. That's pretty good for a 16 year old kid who lives next door to a UFO! I found her to be endlessly entertaining and cleverly written.

It's been 3 years since the spaceship landed when the book begins, and it has been sitting in an open field for all that time, doing nothing. Not moving, not making a sound, and no one appears to be inside. But the military isn't taking any chances, and has set up shop in the area to guard the ship and prepare for the day when something -- anything -- happens.

Across the road from the military fence around the ship, is an assorted group of misfits and odd-balls in camper vans, keeping a close if jaundiced eye on what goes on around the ship -- and they don't want to miss a thing. Between these two disparate groups, is Annie, busy gathering intel.

I can't give you anymore than that. I didn't see the ending coming, and you won't either -- at least not the whole ending. Left me wondering if there will be a sequel. I'll read it if there is.

NOTE: Steve Carlson does a GREAT job voicing all the many characters in this one -- including a couple of teenage girls -- and that's no mean feat for a guy who sounds like Wilfred Brimley's nephew! He really brings the folksy! Awesome job, Steve!


Highly Recommended -- for people who love: Well written/read sci fi audiobooks that make them laugh out loud; smart teenage girls who save the world, and quirky folks who travel in camper vans -- with guns.

A space-ship lands in a small town...

What a fun book. I love books that are full of interesting concepts and ideas.

I expected the usual, spaceship invades, chaos ensues... This was different. Spaceship invades, nothing happens, until it does. The reason nothing happens is both interesting and important. When things do happen, it's also for both interesting and import reasons. I'd give a plot summary, but I don't think I could do better than the one listed without giving something away. I must say that I love the idea of a spaceship that lands and does nothing and it and the accompanying military guard simply becomes a weird footnote in the small town.

The other reason why I like this book is that the characters make sense. They are often forced to deal with difficult and weird situations, but they deal with them in ways that I could see happening. The characters feel real, they each have their personalities and motivations I don't think I ever hit a place where I felt like they acted only to serve the plot. At the same time, the plot was well thought out and moved forward at a good pace (when I read a review or two online, a couple said that the plot bogged down a bit in the middle, maybe because I listened to the audio book version, but I didn't feel that way).

Speaking of the Audible version, Steve Carlson did an excellent job reading this story. The characters were given a lot of life and each had a distinct voice, not always an easy thing to do, especially when the cast of characters include teen aged girls, government agents, space-ship watching kooks and more.

Anyway, I really enjoyed this book. It's a good read and planted some good ideas to think about.

There is so much to like about this book.

1) The characters. Oh, they were so much fun to read about, especially Annie. I want to have at girl over for a movie marathon.
2) The story. It is a scifi book and it is more than a scifi book. Kept me interested the whole way through.
3) The humor. That was an unexpected delight. I found myself laughing out loud and giggling through several passages.
4) Rated PG. Yep, a scifi book that kids can read. There was an innocence that permeated the story. I felt like I was watching a movie with my family, and we were all enjoying it without mope having to cover my kids' eyes and ears.
5) The narrator. Oh. My. Goodness! Steve Carlson can voice act his socks off! His reading style caught me up into the story so well I would find myself looking around to make sure I wasn't actually in the story myself. And he captured the humor with just the right delivery. So well done!

What a great time I had listening to this book. Gene Doucette has a wonderful sense of humor and Steve Carlson's timing of this humor made me laugh out loud more than five times at least. I'm 50 and enjoyed it and sent it to my 13 year old daughter because I know she will too.

I rarely write reviews, but this was one of the most enjoyable books I have listened to. You know that when you miss the characters in the book, once you are finished, it was a great book. This was that kind of book. Thank you Gene Doucette!

Bit too long for what it is

Narrator is ok but doesn't have a lot of variety. Story starts out somewhat interesting, but a bit after halfway things just drag out much more than they needed to. Some interesting and fun ideas in the story, but it all could have been tightened up a bit.

I thoroughly enjoyed this character driven , well-written story performed with style. Please don't look for a lot of high-tech action, but know there is enough science behind the story to make it feel credible. I loved how the author chose to explore how individuals handled the knowledge that we are not alone in this universe when the evidence didn't perform as expected. He also avoided plot pitfalls and kept it engaging. I admit I figured out what was going to happen before it did, but that did not take away from the experience of listening to the story at all. Totally worth a book credit!