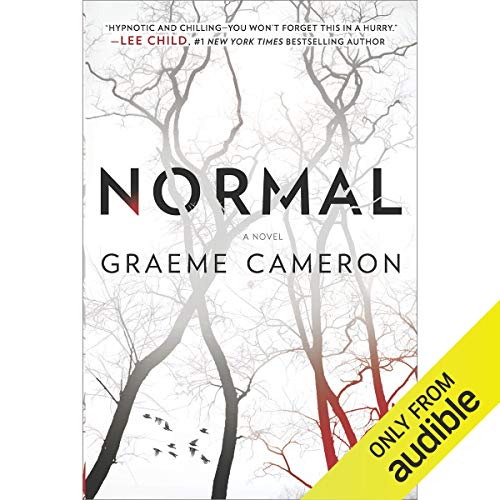 By: Graeme Cameron
Narrated by: Julian Elfer
Try for £0.00

He lives in your community, in a nice house with a well-tended garden. He shops in your grocery store, bumping shoulders with you and apologizing with a smile. He drives beside you on the highway, politely waving you into the lane ahead of him. What you don't know is that he has an elaborate cage built into a secret basement under his garage. And the food that he's carefully shopping for is to feed a young woman he's holding there against her will - one in a string of many, unaware of the fate that awaits her.

This is how it's been for a long time. It's normal...and it works. Perfectly. Then he meets the checkout girl from the 24-hour grocery. And now the plan, the hunts, the room...the others - he doesn't need any of them anymore. He only needs her. But just as he decides to go straight, the police start to close in. He might be able to cover his tracks except for one small problem - he still has someone trapped in his garage.

Discovering his humanity couldn't have come at a worse time.

What listeners say about Normal

Would you consider the audio edition of Normal to be better than the print version?

The choice of Julian Elfer to narrate this book really gave it something else, a chilling essence that you would not get from just reading the book

Have you listened to any of Julian Elfer’s other performances? How does this one compare?

I haven't listened to any of Julian's other performance, and i guess it really depends on the story that he is telling, but, after this performance I will keep an eye/ear out for his skills!

There is quite an interesting edge to this story, about how the perpetrator's opinions, thoughts and feelings change throughout his actions, but the stand out element of this audio book is the detached and slightly chilling narration by Julian Elfer. His performance really makes the story come alive.

... You discover an author who writes brilliantly and then find out there's only that one book Gah!!!!
Absolutely loved this book and everything about it. Alternated between liking and being horrified by the main character! My only regret is that I've finished and now have to wait patiently for the next gem from Graeme Cameron. Great narrator too.

Serial killer black humour at it's best. Similar to You.
Great narration! Worth a listen.

I must confess that I love a really twisted dark novel, and this ticks all the boxes. Ending was disappointing but the journey getting there was still worth it.

Where does Normal rank among all the audiobooks you’ve listened to so far?

All of it.Gave real depth to the characters.

Yes, laughed possibly too much and at wrong times.

❤️ a brilliant narrative of a psychopath caught in his own actions

This book is a breath of fresh air in my library- the narrator is perfect in his delivery of this story which kept me listening at every opportunity
The main character is a enigma to himself and the listener - yet he comes over as ‘normal’ to himself and all around him and you a listener who is behind him , following his every move and thought process

Well worth it (in my opinion)

What a unique perspective. Loved the narrator as well. The main character was polite and horrifying and charming. I may have to re-read this one to pick up all the terrifying subtleties.

Not your typical murder mystery. Sometimes funny sometimes horrifying.
I do recommend this book. It's a quick listen as well.

What made the experience of listening to Normal the most enjoyable?

I enjoyed the narrator. And I loved that I was cheering on the bad guy, holding my breath in case he gets caught. It is twisted, sick and funny.

What other book might you compare Normal to and why?

None. I have not listened to any books like this. I suppose Dexter and other serial killer POV books could be similar but I haven't listen to any.

Not one scene was my favorite. I like how unpredictable the story was. I never knew what would happen next. And I thought the ending was perfect !

Yes. I did not like stopping. I wanted to hear it all without interruptions.

This book kept me interested then slapped me with that horrible ending. I got no closure with this book at all. Very disappointed

Would you consider the audio edition of Normal to be better than the print version?

I did not read the print version. I really enjoyed the life the reader put into this audio version.

What was one of the most memorable moments of Normal?

I don't want to spoil anything, but my favorite part was when the plot takes a very comical and fun twist from the normal gloomy serial murder books. It was an all around great read.

Which character – as performed by Julian Elfer – was your favorite?

Erika turns out to be my favorite character. She has such a crappy life before she is kidnapped that the outcome of the story is totally unexpected and unpredictable.

I had a strong emotional response to the ending.

I was surprised how much I enjoyed this book. Serial killer books can be tedious and yucky to listen to however, this book was enjoyable.

We are taken on a journey in the mind of a... collector of sorts. He collect women, until one day he meets a woman he doesn't want to collect but rather know. The book is entertaining and a page turner up until the end. I didn't appreciate the lackluster ending and that is reflected in my low star rating. It is a thrill ride of a book and the narrator is a peach to listen to.

Bad Boys Have All The Fun

What made the experience of listening to Normal the most enjoyable?

The narration of this title was particularly enjoyable. I'm fairly certain if I met a crazed serial killer with such a soothing voice, I might just forgive him all his .. um .. quirks. I found myself sort of rooting for the guy.

Which character – as performed by Julian Elfer – was your favorite?

The only trouble I had with the book was that the narrator didn't have much change in the way he portrayed the various characters. Many times I lost track of who was saying what because what differences there were, were very subtle. It never took me long to get back on track, and I far prefer that being the problem than (as with other narrators) certain characters being very annoying in the way they are voiced.

The last couple of chapters had me really hoping for a particular outcome. I'll not spoil anything and just leave it at that.

Overall, I really enjoyed this story. Very engrossing, IMO. A couple of times I found myself sitting in the car just trying to get to a chapter break before I shut off the stereo.

The story line was interesting until the end. What a crappy way to leave things! Like a great movie that just skids to a halt without warning.

it was hard to stay with the story line.I was hoping for a novel on something with a criminal minds type gripping holding your mind to the story