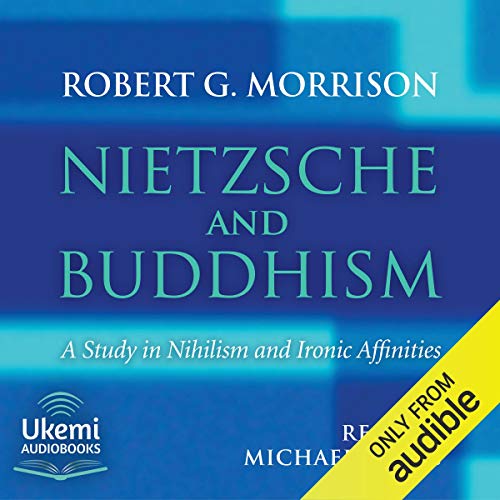 By: Robert G Morrison
Narrated by: Michael Lunts
Try for £0.00

Morrison offers an illuminating study of two linked traditions that have figured prominently in 20th-century thought: Buddhism and the philosophy of Nietzsche.

Nietzsche admired Buddhism, but saw it as a dangerously nihilistic religion; he forged his own affirmative philosophy in reaction against the nihilism that he feared would overwhelm Europe. Morrison shows that Nietzsche's influential view of Buddhism was mistaken, and that far from being nihilistic, it has notable and perhaps surprising affinities with Nietzsche's own project of the transvaluation of all values.

Robert Morrison is both a trained philosopher and a practising Buddhist.

What listeners say about Nietzsche and Buddhism

This was a great beginning slightly slow middle and a fantastic finish. Lots of work to get the gist of the whole meaning of the book and concepts. I loved it though. I plan to read it again next year to refresh all the abstract ideas I learned. I bought a hard copy of the book since the ideas were worth underlining and pondering over.

"We Whose Duty Is Wakefulness Itself..."

A fascinating look at both Buddhist philosophy and Nietzsche's interpretation of its ideas and texts.

Amazing topic, so glad someone covered this topic

This is a great topic to cover. Please write more like this in the future. Excellent!!!

I've often wondered about this area so it's great to see someone covering this. Really well done, brilliant.