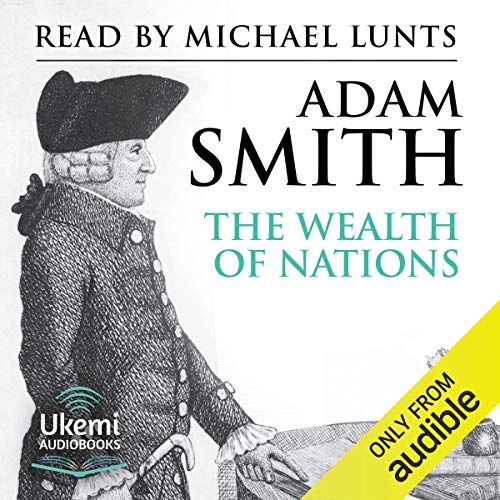 The Wealth of Nations

By: Adam Smith
Narrated by: Michael Lunts
Try for £0.00

The Wealth of Nations, first published in 1776, is the first book of modern political economy and still provides the foundation for the study of that discipline. An Enquiry into the Nature and Causes of the Wealth of Nations, to give it is full title, was an immediate best seller and has since rightfully claimed its place in the Western intellectual canon. Its author, Adam Smith (1723-1790), was one of the brightest stars of the 18th-century Scottish Enlightenment.

Along with important discussions of economics and political theory, Smith mixed plain common sense with large measures of history, philosophy, psychology, sociology and much else. Few texts remind us so clearly that the Enlightenment was very much a lived experience, a concern with improving them human condition in practical ways for real people.

This recording opens with an informative and helpful introduction by Mark G. Spencer of Brock University, Ontario, Canada, an authority on the period. He places the work and its concepts against the background of Smith’s life and influences, and includes his strong friendships with key figures of the time varying from the philosopher David Hume, the chemist William Cullen and the architect Robert Adam.

The Wealth of Nations is divided into five books. Book I: Of the Causes of Improvement in the Productive Powers of Labour, and of the Order according to which its Produce is Naturally Distributed Among the Different Ranks of the People. Book 2: Of the Nature, Accumulation, and Employment of Stock. Book 3: Of the Different Progress of Opulence in Different Nations. Book 4: Of Systems of Political Economy. Book 5: Of the Revenue of the Sovereign or Commonwealth.

A masterpiece by any measure, The Wealth of Nations remains a classic of world literature to be usefully enjoyed by listeners today. It receives an engaged and clear reading from Michael Lunts. A PDF is available for download containing tables illustrating the Prices of Wheat and the Malt Tax.

What listeners say about The Wealth of Nations