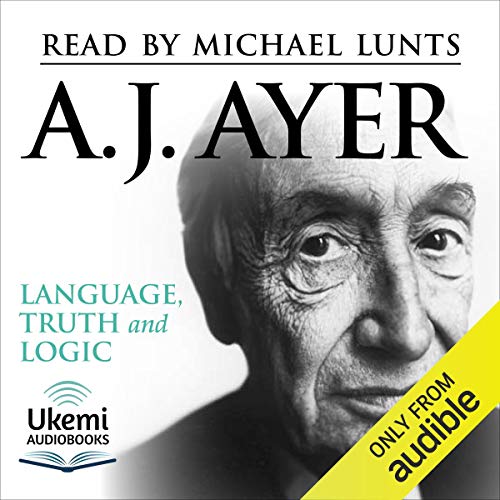 The front cover of the second edition of Language, Truth and Logic carried this statement in capital letters: ‘THE CLASSIC TEXT WHICH FOUNDED LOGICAL POSITIVISM - AND MODERN BRITISH PHILOSOPHY.’

It was a bold statement, but the book, first published in 1936 when A. J. Ayer was just 25 and a lecturer on philosophy at Christ Church, Oxford, drew unstinting praise from leading figures in the field, including Bertrand Russell. Its effect was to ‘sweep away the cobwebs and revitalise British philosophy and it continued to make an international impact on 20th century thought’.

The outline on the back of the first edition laid out the ground. ‘This book will appeal not merely to philosophical specialists but to all those who are in any way concerned about the nature and scope of human knowledge. The author deserves the gratitude of all students of philosophy for his clear and definitive exposition of the purpose and method of a philosophical enquiry. Relying on the principle that a statement of fact, to be genuine, must be empirically verifiable, he demonstrates the impossibility of any system of speculative philosophy which attempts to transcend the field of natural science and shows that if philosophy is to make good its claim to be a genuine branch of knowledge, it must confine itself to works of clarification and analysis.

And he describes how the philosopher, by the provision of definitions and the examination of their consequences, perfects our understanding of the propositions that are expressed in the language of science and in that of everyday life.

In this way the author succeeds in bridging the gap between philosophy and science which was one of the most unfortunate legacies of the 19th century. He shows that philosophy and science, so far from being competing brands of knowledge, are complementary to one another. The philosopher finds in the theories of the scientist the richest material for his analyses; the scientist looks to the philosopher to dispel the confusions which result from the use of unanalysed concepts, and to formulate definitions which will lead to the development of new and fruitful theories.

In addition, the author succeeds in settling the old controversy between science and religion, by proving that there cannot be any logical ground of enmity between them. For the statements of the theist, in so far as they involve the assertion of the existence of a transcendent God, are found to be devoid of literal significance, since they are not empirically verifiable.

They are expressions of feeling, and not statements of fact; and, consequently, they cannot possibly come into contradiction with any scientific hypothesis. And the book deals no less conclusively with the question of personal survival. It is shown that the empirical self cannot possibly survive since its self-identity must be defined in terms of the self-identity of the body; and that the assumption of the existence of a metaphysical soul as distinct from the empirical self is not a genuine hypothesis.

Particular interest will be aroused by the author's treatment of the propositions of logic and mathematics, which he regards as tautologies, by his method of dealing with the question "What is truth?" and above all by his attempt to provide a definitive solution of all the most important problems which have given rise to disputes among philosophers in the past. Historically this book marks a return to the principles of English empiricism which were forsaken in England at the close of the 19th century. It stamps the author as one of the leading exponents of the scientific movement in philosophy which is one of the most important features of the intellectual life of our time.'

What listeners say about Language, Truth and Logic