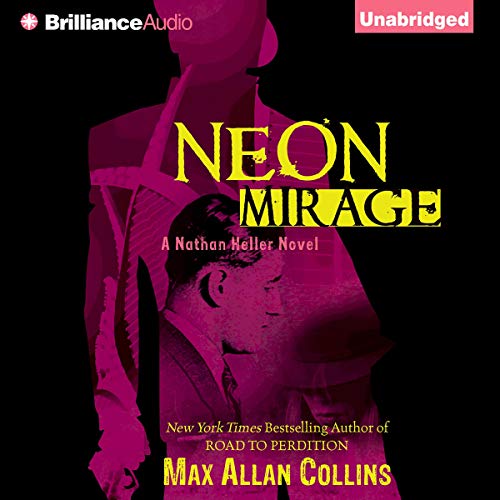 In 1946 Chicago, Nathan Heller - president of the flourishing A-1 Detective Agency - is hired to protect racing-wire gambling chief James Ragen, who is nonetheless shot down on the streets of Chicago. Not one to take such an affront sitting down, Nate goes after the killer, but he’s in for the biggest surprise of his career. Demonstrating once again that he is the master of true-crime fiction, Max Allan Collins’ story of the birth of Las Vegas - and the dirty deeds that floated all around it - is a masterpiece of modern noir. Heller follows the trail as it leads to Hollywood and Las Vegas, specifically to Benjamin “Bugsy” Siegel, but when he proves Siegel’s innocence, Heller and the suave gangster wind up friends... and rivals for the love of Nate’s life. Bugsy hires Heller as security chief of the under-construction Flamingo hotel, where mob bag woman Virginia Hill is a dangerous, if glamorous, distraction. It all comes to a boil with a shocking mob assassination in Beverly Hills that sends Heller into fever-dream ride of vengeance.

What listeners say about Neon Mirage

What happens in Vegas Stays in Vegas

Don't get me wrong, I am a big fan of Max Allan Collins mix of fiction and fact with the Nate Heller series. With this entry Nate finds himself mixed up with the mob once again. After a series of events in Chicago, that results in the death of client, Nate travels west looking for Peggy, the niece and his former lover. Between LA and Vegas, Nate is pulled into the true life efforts of Ben "Bugsy" Siegel as attempts to open the lavish Flamingo Hotel in Las Vegas. The story is great and very entertaining until the last couple of chapters as Nate somehow is directly involved in the fate of Siegel. In previous encounters with real characters, Nate was usually on the sideline as real historical events unfolded. This time around, he is part of the outcome. I found that a little too much including a coincidental twist at the end that pointed back to early events in Chicago. With that said, it was overall still an enjoyable listen and I will be moving on to the next.

The more I read Max Allan Collins, the more obvious it is that he is one of the best writers of crime/detective fiction. And Neon Mirage, another great outing featuring Nate Heller, is proof of that fact. If you enjoy well written noir detective fiction, detailed research and vividly drawn characters both real and fiction, then you should read this book. And then read the rest of this tremendously written series.

Always fun to tag along with a inciteful detective like Nate. A little bit of a stretch with his marksmanship using a 38 but still very enjoyable.

What made the experience of listening to Neon Mirage the most enjoyable?

Max Allan Collins paints pictures with words. Can't wait to listen to the next book in this series.

What does Dan John Miller bring to the story that you wouldn’t experience if you just read the book?

Dan John Miller is an excellent narrator, perfect for Nathan Heller. He brings the character to life.