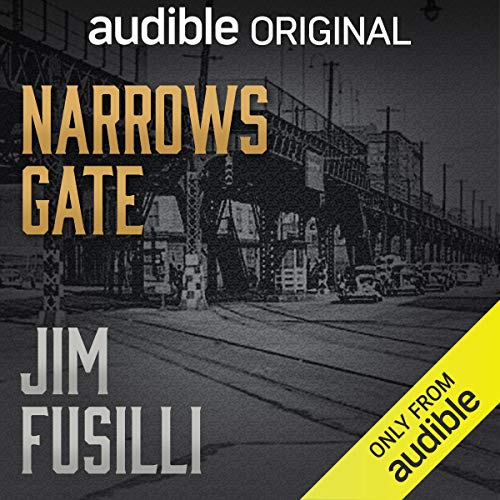 Narrows Gate is the novel Lee Child raves is "outstanding in every way - major talent, voice, feel and been-there knowledge meets a story as tough and complex as the time that inspired it.”

In the years surrounding World War II, Narrows Gate, New Jersey, is a dangerous place - and a world of possibilities.

For Sal Benno, a neighborhood kid who doesn’t take to school, Narrows Gate is where he can provide the favors the Mafia needs. His street smarts and his sharp wit bring him into the mob’s inner circle - and closer to ultimate danger. His lifelong friend, Leo Bell, aspires to a life well beyond the mean streets. He sticks by Sal through thick and thin, but harbors a dangerous secret that could either keep Sal alive - or bring his life to an abrupt end. Looming over both of them is the shadow of Bill “Bebe” Marsala, a handsome and hugely popular crooner who becomes a pawn in a mob war that could destroy them all.

Narrows Gate is an epic saga that George Pelecanos calls “equal parts Ellroy, Puzo and Scorsese” - a powerful story that captures the heart of the immigrant experience, and the soul of America.

I love historical novels. I could be lost in the time of the mafia while loving the characters grow up.

So good getting book 2 now

I love mafia yarns but only if they're done with the necessary background knowledge and skill. Jim Fusilli did an outstanding job on this one with realistic dialogue and story. Also not a short book so more to enjoy without dragging the story out. One thing I would recommend is that throughout the prologue and first chapter you might want to sketch yourself a character map or list. It could just be me but when you introduce quite a few characters in quick succession, and especially if they all have Italian/Sicillian surnames it can be a bit confusing until you sort out who's who (or maybe that's just me...) Enjoy.

Although the story was interesting I thought there were too many characters and at times a bit confusing.

Seemed to have the right ingredients but the story jumped around and it was hard to keep up with the many characters. Too many Italian names to deal with. 😳

Struggled to get through it

I bought this book because of Edoardo Ballerini but the story just never go going. I couldn’t finish it.