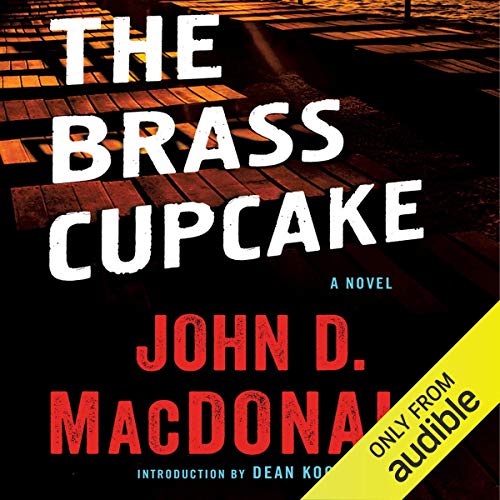 The Brass Cupcake: A Novel

By: John D. MacDonald
Narrated by: Richard Ferrone
Try for £0.00

Ex-cop Cliff Bartells might be the last honest man in Florence City, Florida. After quitting the force over a crisis of conscience, he takes a job at an insurance company buying back stolen jewelry. Cliff is focused on keeping the bottom line down and staying out of the spotlight.But when an affluent tourist from Boston is murdered over a hefty collection of jewelry, Cliff finds himself wrapped up in a case that’s making national headlines. With the victim’s beautiful niece, Melody Chance, determined to help retrieve the goods, suddenly Cliff has the partner he never knew he wanted. Now all they need is a suspect: someone capable of cold-blooded murder in the name of profit. And that could mean anyone in this crooked town.

What listeners say about The Brass Cupcake: A Novel

This book is very much a product of it's time when men were men and women knew their place. I found that pretty jarring throughout the story but it was cleverly plotted and narrated in the pulp noir style.. Very Raymond Chandleresque. I enjoyed it despite the dated attitudes, it was clever and read with relish.

What made the experience of listening to The Brass Cupcake: A Novel the most enjoyable?

Easy to listen too, but with a complex plot

Richard Ferrone does a great job with a nicely paced and balanced performance, and makes you like the main character

Its a crime thriller, not really meant to be moving, but I wanted to hear the end.

This is the first John D MacDonald book I have listened to and I will look out his others.

What a step into the past, he writes a story like know one else. I feel like i have meet these seeding characters.

As good as Chandler

Really a treat to read tough guy dialogue with a brain. The performance was perfect and captivating. Difficult to put down.

If you could sum up The Brass Cupcake: A Novel in three words, what would they be?

MacDonald's novels are always enjoyable (if you don't mind wincing at the blatant male chauvinism his characters display. Just whack 'er around, boys). The story is textbook hardboiled...with only a few really shaky motivations (including the final showdown, the setup for which is just plain nuts on the protagonists' part).

But what makes this one worth staying for is Ferrone's performance. Man, what a great reader. His characterizations carry you over all the rough spots ... and then some!

Love the narrator, and it's a good lesson in social history to read a novel about the 50's that was actually written in the 50's. It's meant to be a tough noir, and it is, with an added poetic flair by a truly brilliant writer. If you love Bogart movies you will LOVE this book ... same choppy, gritty dialogue. But the chauvinism of the era can get a little grating. It's a true product of it's time -- when men were men, and women were not even close to equal -- so I didn't hold that against the author. Interesting to remember just how far we women have come.

Macdonald is never a let down! great reading, narrarator is great, lived it!

Outstanding. Time to start listening to all the rest! Love Travis McGee, of course. Can't wait to dive in from the beginning.

Would you consider the audio edition of The Brass Cupcake: A Novel to be better than the print version?

I have no idea, I didn't read it, I just listened to it.

Cliff, of course. He seems like the typical tough ex-cop, caught in a bad situation, confirmed bachelor. But his character wasn't like the other tough, ex-cop characters in other books. He has a side that is sweet, caring, and he lets it out occasionally.

I have listened to many of Richard Ferrone's performances. I have all 16 of the Left Behind Series and he is the narrator on many of those. Also, I have heard him on several other novels as well. I like him. When I can't find a book that sounds good, I search by narrator and Richard Ferrone is always my second choice.

Nothing extreme. A couple of laughs - no tears. Just enjoyed it.

One of the things that was very enjoyable was the timeframe of the story. Being set in the 40's, the references to fashion, car, prices, etc., very interesting.

Another thing I really, really liked was the fact that when there was a love scene or other sexual situation indicated, it wasn't described in gross detail the way most male writers feel the need to do. I find that disgusting and am very glad you have added the jump forward button so I can skip all of that. In that same category, I was pleased that the language used was not extreme. It was nice not to hear the "F" word. I've never heard it where it actually added anything to the character or the story. All it did was make me question the author's style.

I was sorry this story it was over. I liked the characters, and the style of writing, and I've decided I would try another John MacDonald novel.

Felt like JD was testing his style in this one - not sure if he was trying to be another author but it reminded me often of Don Hamilton's Matt Helm series. I didn't really enjoy it, because it became too predictable for pleasure.