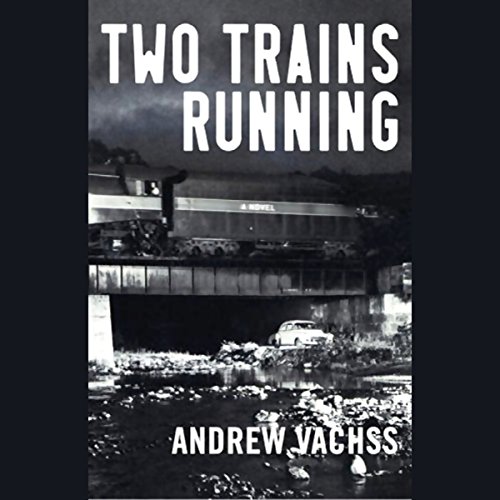 A Novel
By: Andrew Vachss
Narrated by: Stephen Hoye
Length: 17 hrs and 41 mins
Categories: Fiction, Historical
4 out of 5 stars 4.0 (2 ratings)

Electrifying, compelling, and ultimately terrifying, Two Trains Running is a galvanizing evocation of that moment in our history when the violent forces that would determine America’s future were just beginning to roil below the surface.

Once a devastated mill town, by 1959 Locke City has established itself as a thriving center of vice tourism. The city is controlled by boss Royal Beaumont, who took it by force many years ago and has held it against all comers since.

Now his domain is being threatened by an invading crime syndicate. But in a town where crime and politics are virtually indivisible, there are other players awaiting their turn onstage.

Emmett Till’s lynching has inflamed a nascent black revolutionary movement. A neo-Nazi organization is preparing for race war. Juvenile gangs are locked in a death struggle over useless pieces of “turf”. And some shadowy group is supplying them all with weapons. With an IRA unit and a Mafia family also vying for local supremacy, it’s no surprise that the whole town is under FBI surveillance. But that agency is being watched, too.

Beaumont ups the ante by importing a hired killer, Walker Dett, a master tactician whose trademark is wholesale destruction. But there are a number of wild cards in this game, including Jimmy Procter, an investigative reporter whose tools include stealth, favor-trading, and blackmail, and Sherman Layne, the one clean Locke City cop, whose informants range from an obsessed “watcher” who patrols the edge of the forest, where cars park for only one reason, to the madam of the county’s most expensive bordello. But Layne is guarding a secret of his own, one that could destroy more than his career.

Even the most innocent are drawn into the ultimate-stakes game - like Tussy Chambers, the beautiful waitress whose mystically deep connection with Walker Dett might inadvertently ignite the whole combustible mix.

In a stunning departure from his usual territory, Andrew Vachss gives us a masterful novel that is also an epic story of postwar America. Not since Dashiell Hammett’s Red Harvest has there been as searing a portrait of corruption in a small town. This is Vachss’ most ambitious, innovative, and explosive work yet.

"The pace is good and the plot is riveting." (Publishers Weekly)
"Vachss plows a field famously sowed by Dashiell Hammett and reaps his own kind of red harvest....Dark, violent, blood-drenched, page-turning." (Kirkus Reviews)

Couldn't relate to any of the characters

This book was billed as having some 1950/60's era historical explication but, besides the overplayed car model descriptions, there was nothing in this book that wasn't common knowledge. I couldn't relate to any of the characters (they were flat anyway) and I found the book frustrating. I did think the reading was good, but the book was not.

give this one a pass!

This book is supposed to be historical fiction, or at least, I think so. In my opinion, it fails both as history and as fiction. Though the narrator does his best to resurrect the book, he has an annoying habit of dropping his voice at the end of each and every sentence. My advice, don't bother with this one.

A mile wide and an inch deep

The author has managed to introduce every era-related theme into his plot but the result is stereotypical and shallow. Its overambitious shopping list of characters/groups includes -- and this is only a partial list -- a hired Korean-war-vet killer, the local mob, the mafia, the Irish mob, proto-Black Panthers, the KKK, the FBI, Happy-Days-style street gangs, a gold-hearted madame, a seemingly bent straight cop, a taboo mixed-race liaison and a beautiful-but-innocent diner-waitress love interest. With all those ingredients, the stew could conceivably be exciting, but the delivered dish is tasteless and thin.

One of the most annoying artifices is that the author insists on using dialogue to provide the backstory which forces the listener to endure a whole series of highly unlikely and stilted conversations.

Having thoroughly enjoyed veteran narrator Stephen Hoye's readings of other novels (The Killer Angels is superb), I couldn't help but feel sorry for him as he tried valiantly to make this book come alive.

I don't often write reviews but I have felt compelled to write this one to warn fellow Audiophiles to save their credit and avoid this book.