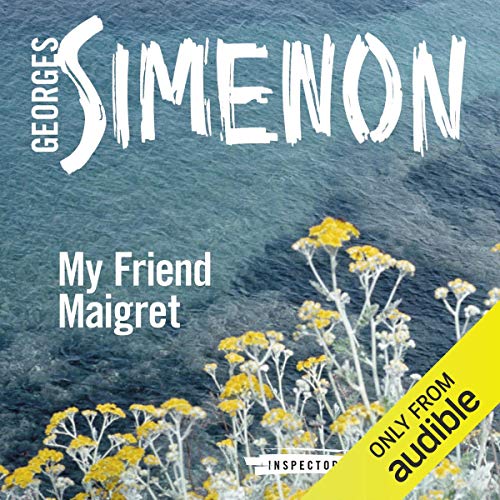 "His artistry is supreme." (John Banville)
"One of the greatest writers of the 20th century.... Simenon was unequalled at making us look inside, though the ability was masked by his brilliance at absorbing us obsessively in his stories." ( Guardian)

Mr. Pyke of Scotland Yard has come to Paris to observe the methods of Maigret. This provides a basis for comedy because not only does the inspector have no methods, but the interaction between the two men illustrates Anglo-French relations at close range. That is to say, there is mutual outward cordiality and inward bewilderment.

Maigret is interrogating a bediamonded Corsican club owner when Inspector Lechat of the Draguignan Flying Squad calls. A man by the name of Marcellin has been murdered on the island of Porquerolles, and more to the point, he spent the last hours of his life talking about "his friend Maigret."

It's been bucketing down for days, and the Mouthons (Madame's sister and her husband) are ensconced in the apartment and show no signs of going home. The crime is out of his jurisdiction, and Lechat warns that a mistral is blowing, but Maigret is curious and Pyke is up for a trip to the Midi, so off they go.

The interactions between the two are subtly comical and thoroughly enjoyable. Maigret is a bit uneasy, worried about manners and customs, and how he might appear. There are some rather French situations that he worries Pyke won't understand, such as "client theft," and the islanders are none too worried about keeping their clothing on. Whatever will the buttoned-up Englishman think? This vulnerable, people-pleasing side of Maigret is something he keeps well-hidden most days!

Once again, a good one. There's only one Maigret left on audible after this one. I hope there will be many more in the future. There's no narrator quite like Gareth Armstrong, and no writer in the French language like Simenon.

Somehow George Simenon on has a cult following for his Maigret novels. I believe he wrote more than 100 of these. I have listened to several and I still can’t quite figure out what the appeal is. The pace is plodding the mystery not that interesting as everything is quite old fashioned, which is not a surprise considering how old these books are. If you are enamored with turn of the century French culture go for it. However I would greatly recommend the BBC radio plays in place of the original novels.