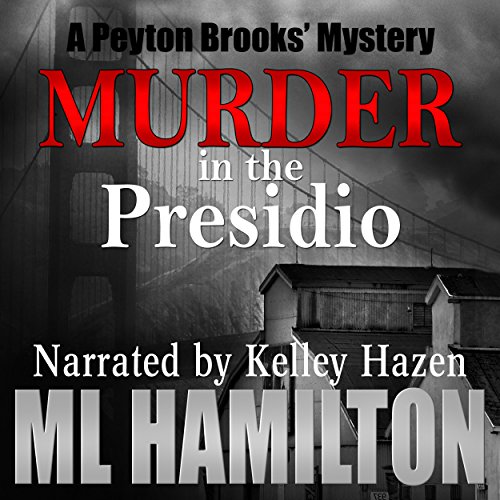 Murder in the Presidio

Life has become increasingly complicated for San Francisco Inspector Peyton Brooks. With a past murder suspect living in the spare bedroom, an abusive receptionist bunking on the couch, an ex-boyfriend about to marry another woman, and her own mother in a relationship with a bigot, Peyton doesn't think her life can get much more difficult.

Until her partner of eight years is suspected of murder.

With a serial killer still on the loose in the city, Peyton must find a way to keep Marco from winding up in prison himself.

What listeners say about Murder in the Presidio

So close to being the end!

First of all, for those who have not been listening to (or reading) the series, please do so. Each book has its own mystery but the series definitely includes a progression of the characters' stories. Plus there is the Janitor case which has been developing through the books, though now it is advancing at an exponential rate!

For those who have been following the Peyton-Marco dynamics, this book is for you. So much happens in this book and I do not want to give any of it away. Needless to say, the book and the series are fantastic and Kelley Hazen does a wonderful job of performing both. The ML Hamilton and Kelley Hazen partnership promises, and delivers, entertaining stories that keep the audience coming back for more and more!

Can't wait for the next one

Would you consider the audio edition of Murder in the Presidio to be better than the print version?

I love the audio version because it creates a special atmosphere for the whole story that I would miss in the print version. I have an image in my head for each character because of the narrator's performance. I'm dying to know what happens next, but I won't read the following book, I'd much rather listen to it.

Yes. There are many interesting story lines in this book. Most of all I have my own theories about the bad guy and I love how the characters' personal lives get more and more complex.

Have you listened to any of Kelley Hazen’s other performances before? How does this one compare?

Yes. I love how she narrates all of Peyton Brooks mysteries. She has great timing for all the dialogue and is an excellent performer. It's not just about reading clearly and with a good voice, you have to engage the listener and she definitely does that.

Get the audio version of this series and I guarantee that the experience will be completely different and more exciting. Can't wait for the next book!

It doesn't get any better than this. I truly love these characters. I hate it when the audiobook ends. I can't wait for the next one. Great crime. Resolution of older story lines. Fabulous unrequited love and romance. Go Peyton! Jake, Marco, Marco's family, the cops at the precinct.... It's a listeners dream of a series. I'm hooked.

I was voluntarily provided this free review copy audiobook by the narrator and found it very entertaining. The Janitor still has Peyton and Macro running circles. His latest crime will change Peyton's and Marco's lives forever and they're still no closer to discovering his identity. This suspense filled plot will keep you listen, but the realistic characters will make you love it. This combination of author and narrator is awesome. I can hardly wait to start the next book.

Peyton is the target this time...

Volume 6 in Peyton Brooks' Mysteries will definitely keep you glued to the pages (or to your player, as it was in my case:))...

The plot is extremely fast and intense, with Janitor recreating his own crimes, killing again using methods he already used once. What very soon becomes obvious - first to Marco, then to others - is that it's Peyton that the serial killer is really after this time.... So while trying to solve the case together with his partner, Marco has to also act as her secret bodyguard. But that's not an easy task, considering her passionate, independent character and his feelings for her...

What I like best about this installment in the series is that the plot, intense as it is, does not overshadow the emotional side of the story - Marco's feelings towards Peyton, his frustration and determination to keep her alive, but also her slow realization of how important Marco is for her. I think this emotional awakening on her part is excellently done by Ms Hamilton.

Considering the whole series, I would say this is the best part so far - the plot is developing very fast and yet smoothly, with enough twists and surprises to keep your interest in the crime, and at the same time allowing you to feel the emotional turmoil of the characters' personal lives.

As for the narration by Ms Hazen, it's impeccable - the pace is right, the interpretation of individual characters very good and the emotions conveyed ringing true.

Murder in the Presidio (Peyton Brooks' Mystery #6) was a great read by M.L. Hamilton. San Francisco Inspector Peyton Brooks' life is extremely complicated. She has a past murder suspect in her spare room, and abusive receptionist is sleeping on her couch, her ex boyfriend is engaged, and her mom is in a relationship with a bigot. She doesn't believe that her life will get much more difficult. Unfortunately her partner of eight years becomes suspected of murder. Peyton feels she must keep Marco out of jail while still trying to find the serial killer that is on the loose. This was another great read by M.L. Hamilton and I absolutely loved listening to the life Kelley Hazen brought to the characters.

Murder in the Presidio

Just when you thought it couldn’t get anymore intense... things explode. With a serial killer on the loose, time is of the essence. With one of their own taken, can the SFPD get there before it’s to late?

Ms. Hamilton covers the full range of emotions is this installment of The Peyton Brooks Mysteries. It’s so good, you’ll be left wanting more!

The narration really brings this story to the next level. With so many different characters, each with there own personalities and mannerisms, you would think it would be difficult to follow along, but not so. Ms. Hazen delivers a fantastic performance!