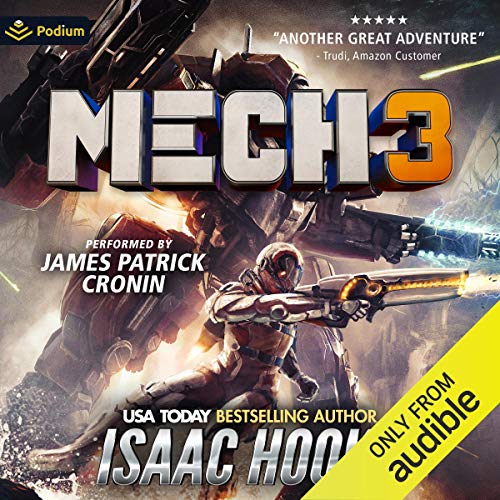 By: Isaac Hooke
Narrated by: James Patrick Cronin
Try for £0.00

Rade and his team are sent to investigate a disturbance on a Sino-Korean colony.

Apparently, someone tipped off the Sino-Koreans, because the moment his team lands they find themselves under attack.

Separated from his men, he discovers the source of the disturbance, and witnesses the release of an ancient, alien power.

When that power focuses its wrath on the colony's civilians, Rade must decide whether he will gather his platoon and intervene, or retreat to fight another day. Staying could mean the loss of all his men. But if he runs, thousands of innocents could die.

What listeners say about Mech 3

Bender is such a jerk and says things that make me look at my phone in disgust. I'm trying to finish, mam o man am I trying but then he says something else that makes it so hard to do. To the author: please kill him off or in between books make him disappear. He hurts the story so bad.

A story about a man and his mech. Every book in the Rade Galaal series gets better and better. James Patrick Cronin does a magnificent job of narration, outdoing himself and matching the previous books in vigour, perfectly acting all the characters. You will run the gamut of emotions as you listen and read (and I did both at the same time): laugh, be sad, be happy, be excited, be enthralled. I honestly thoroughly enjoyed this series. Can’t wait for the next book!

Best of all of the books in this series!!

Of all the Hooke books I've listened to, this one is the best. so many independent, character building scenes. Brilliant.

This was a good way to end this story arc. I enjoyed the narration. I am looking forward to the next arc that starts with "Bug Hunt".

best of the series!