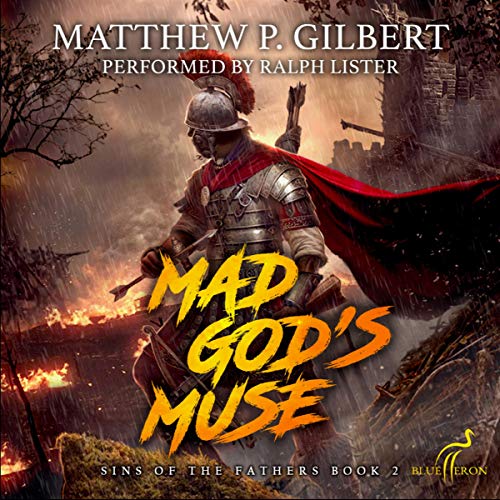 The fate of the world rests on his shoulders. Will he crumble?

Ahmed’s faith is strong, and so is his sword-arm, but as for details, those were for his fallen master. Now, he must somehow rise to the task of leading his men and, by Ilaweh's grace, thwart the Dead God's apocalyptic prophecy.

But how can he command hardened veterans of war, men with much blood on their hands, when he has accomplished so little in his young life?

If Ahmed can earn their respect, there might still be time to do as his master had hoped - ally with the sorcerers of Nihlos. They are dangerously unpredictable and capricious, perhaps even mad, but their power is undeniable.

Ahmed will need that power. For he knows something even his master never guessed: their ultimate destination is the true heart of darkness. An ancient city of evil and death that none survive.

Don't miss book 2 in this epic fantasy adventure that will keep you on the edge of your seat listening.

Trust in Ilaweh, but put a sword in 'em to be sure

If one felt that Dead God's Due (book 1) took awhile to ramp up, this volume hits the gate running. With the setting established, the characters in place, and the plot in motion the author is able to focus on escalating the stakes. The faction infighting, political maneuvering, and the feel of the graphic novel 300 are maintained from the previous entry. The author does a great job of keeping the events relatively "local" and not exploding into massive world building that seems to plague a number of recent fantasy novels. While the stakes are suggested to be world-ending, the story maintains its tight focus on a relatively small area and a manageable cast of rotating POV characters. This is a credit to the novel, as not all stories need to be 1000+ page multi-volume epics.

Ralph Lister once again does a standout performance. The characters all remain distinctly identifiable and are imbued with a sense of individuality. His performance, combined with the author's work make this entry standout.

This book, and by extension, the series, will most likely never be a pillar of the genre, but it is a credible entry in a large sea of IMHO mediocre releases. It is entertaining, has good characterization, a refined focus, and the odd bit of humor. I didn't feel that my time was wasted on this release.

TLDR; If you thought the first was decent this is a step up.

I'll keep this one simple, because we're through the introductions, and world stage setting this books is much better than the first. The author seems to excel at telling a good story, but not starting one, once the basics are set he really hits his stride. If you can look past the rough start that is book one, this one is well worth getting into.

Overall, if you were a little more than luke-warm on the first one grab this, if you're looking for an interesting world to break into this is a great piece.

Mad God's Muse is a great continuation to the series and starts right where Dead God's Due left off. Dead God's Due was a little slow for some people as there was a lot of world and character building to do(which I enjoyed) but Mad God's Muse really is much quicker paced and really enjoyable story. You learn a lot more about some characters past's and their agenda's and see other characters change and grow out of necessity and a survival instinct. Matthew Gilbert has a knack for making your root for or feel bad for character's that maybe you shouldn't.

The narration by Ralph Lister is top notch again and have nothing bad to say about it. The story continues to have great character interaction as well as political scheming and power struggles and still has a great deal of mystery concerning past incidents and characters. I think this is a great continuation in the series and can't wait for the next book to see how things will turn out.

Wishing for a little more

Really enjoyed the story and love the characters development. The author has a habit of skipping over some situations that I would really like to see delved in to more deeply. It isn't as much an issue of "jumping around". I simply feel that there are some neat interactions we miss out on.

Very curious how book three will tie this up. I'd think this series could be more of a 5-part or beginning of an epic 10-book series. So many questions and interesting issues coming up for Book 3 to resolve.

Great listen (fantastic performance) and really enjoy the writing style. Will be keeping an eye on Gilbert and lumping his works in the same shopping cart as Erickson and Abercrombie.

Moving characters to where needed.

*I was given this free review copy of this audiobook at my request and have voluntarily left this review.

Ralph Lister is the narrate the story once again. He's created the voice of the characters along with the pronunciations and continues with it here. As in the first book, Ralph's work is clean and clear. He's easy to listen to.

This book shows some of the magic the Meite's possess. We get to see them in action, implying their power and control. This gives a nice fantasy feel to them and the book.

We dive deep into the politics of the Nihlos in this book. There is corruption and games played by all in the council and high seats. It can get confusing at times because people play both sides of the fence to get what they want. There are moments where I'm confused as to what is going on or why people are saying what they are saying. I think that the conspiracy found in what people are saying and how they are acting is not as clear in audio at moments. When people say one thing and do another it's hard to pick up as well.

I found this book slow moving. This book is one that places people in places. Some of the events to get to these places are interesting but I felt there was a lot of filler to detail out Nihlos and the characters more. Much of this was what made the story slow for me. It felt as though this book is a transition, creating a reason to move the players where they need to be and removing others that stand in their way.

In the end we get a quick glimpse of where we will be heading next. I'm hoping things move along faster to this new place as I'm looking forward to going there and see what comes to be.

It's a really strong showing

Matthew P. Gilbert can absolutely write, and Ralph Lister could probably read anything and make it great. Very cool cultures presented throughout this series that don't get enough focus in most fantasy.

Two is good too

Second book in the series. Of course if I make it to book two there's a good chance it'll be a 5 💥.

Picked this series up because of Blue Heron Audio. Glad I did.

A Tragic Epic Worthy of the Greek Masters

What happens when a man who has lost everything is given a chance by the devil to avenge himself? What happens after the land’s elder mages go one feud too far just when an undead army is gathering? What becomes of the empire’s foolish, hedonistic rulers when the reaper comes for his due? What will the ever-shifting fortunes of the noble sojourner turn up? Will he bring hope of salvation for those who don’t deserve it?

The bard Matthew Gilbert sings of these matters and more in Book 2 of his Sins of the Fathers series. His deft hand plucks up rich characters, setting them alive to scheme, cavort, murder, adventure, fight and suffer. The story is a tapestry of the raw, sweeping appetites endemic to weak humanity and all the infighting it causes. With so many protagonists causing their own misery, Matt has me constantly guessing how the realm will survive.

Looking forward to finding out in book 3!