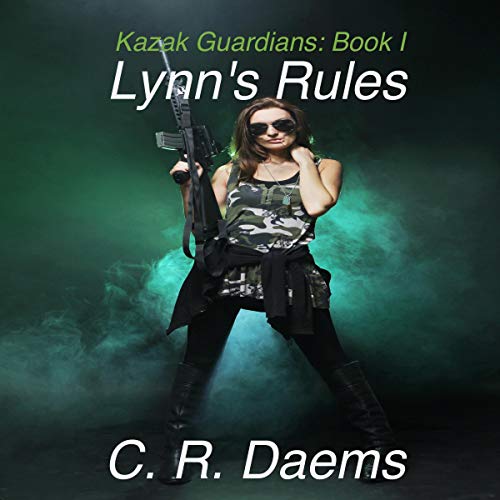 If the Kazak Guardians had a recruiting poster, it would have read: "Wanted: A select few insane men to fight professional assassins with super-human abilities. Good medical plan provided".

Surviving the training program was dangerous - even the first challenge to gain entrance to the school could get you killed. But the training was the easy part. Staying alive afterward was the hard part. Kazaks guarded individuals whose lives were deemed critical to the security of the United States. As such, Kazaks attracted fanatics and the best professional assassins money could buy - liars who could tell lies you believed, ghosts who could become nearly invisible, and illusionists who could appear to be anyone.

Lynn survives years of training and the five deadly challenges to become a Kazak Guardian and enters a world of extremists and assassins, where each assignment become a deadly contest between Kazak and assassin, with the prize the life of the VIP.

In spite of the danger, Lynn enjoys every assignment with its interesting people, new environments, challenges, and best of all the occasional opportunity to pretend to be someone other than a Kazak - a tiger in tabby garb.

What listeners say about Lynn's Rules

I really enjoyed it.

I love the characters, I loved the progression in her character and I loved how she found something she loved doing.

I've read this book when it came out.
The narrator imagined the character with a very good performance.
It gives the reader a better idea about what an actual personal bodyguard does for a living.
I also liked how the opening conflict was resolved in a later chapter.

The Kazak Guardians 3 Book Series wasn't too bad. My preference is No,1 Tasmanian; No2 Black Guard and No.3 Shadow Sisters series