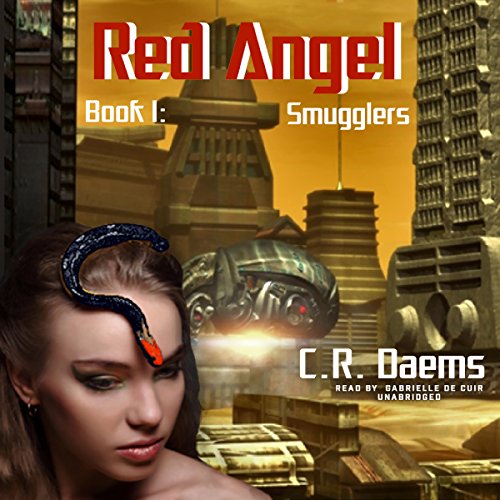 Anna nearly dies, along with all her family, at age four from the deadly Cacao virus. But she survives, thanks to a poisonous red-headed krait. The medical community is excited since there is no known cure for the virus, but Anna and her snake, Red, have a symbiotic relationship - containment, not cure. If she is ever separated from Red, she will die.

Anna struggles through foster homes. As her krait becomes known and valuable throughout the three star empires as one of only a handful of such snakes, she fights off attempts to kill her and snatch Red. She even comes to wonder if her brilliance in school and eventually at deciphering code is somehow connected to her constant companion.

When the Naval Intelligence Agency, the NIA, recruits her, her adventures grow beyond fending off thieves and killers to tracking down interstellar smugglers as part of an elite team, but the smuggling cartel are quick to fight back. In the midst of space battles and well-placed assassins, Anna is convinced that Red's presence may make the difference in survival or death, not just for her but her entire NIA team.

What listeners say about Smugglers

Fun little book with great characters. Would recommend to all especially people more interested in character development and plot rather than too much sex which a lot of books seem to focus on.

Fast paced and action packed, I just couldn't put it down, I was hooked from the start and fast addicted to the series!

pretty interesting premise. a symbiotic relationship between a young woman and a venomous snake. good characters and fairly well paced and written

C.R.Daems is truly amazing author, I like the story with heroism, so well laid lout and interesting. Thankyou for a great novel and away to listen to book 2

Good reading but a warning

Good story that I got as soon as I saw it. Especially liked the young Anna. But there is an odd problem relevant to listening on an Alexa enabled reader. Anna's adoptive parent is named Alexa. When I got to the chapters where there was a lot of dialog the reading stops every time the name gets read. I'm embarrassed by how long it took me to figure it out. So turn off the auto respond and you'll have a much better experience.

I enjoyed the story and I like the main character. She is interesting and likeable. The strange quirk that the character has (a symbiotic relationship with a snake that keeps her from dying from a terrible disease) is a bit strange and doesn't really add very much to the story, but it is a good story nonetheless.

The one issue I had with the book is that the main character joins a team of supposed professionals as the 18 year-old newbie. I understand that she is the prodigy and 'special' but I was struck by the fact that none of her teammates appear to have any skills that she lacks. They basically just follow along in her wake while she solves the case and then they share the credit for her accomplishments. This is supposed to be a highly trained and successful group even before the addition of the main character so it would be nice if somebody else on the team occasionally came up with an idea or uncovered a lead.

The Red Angle Series is fantastic. I have listened to all three of the books so many times that the recordings are starting to fray at the edges. All three books are above and beyond story telling. I will not go into the details of the stories because you will have to judge them for yourself.

Interesting cross between space opera and YA coming of age. Story a bit repetitious at times; for example, same scene told aain after we just went through that scene. Narration very good, and I think helped the writing. I'm onto the second in the series noow. Easy listening.

Bravo!, it’s been a while since I’ve found a new author/series that I’ve enjoyed this much. I just finished the fifth book in this series & have thoroughly enjoyed the ride!!! And it was all without romance, unnecessary sex or foul language. Mr Daems I salute you.
The main character was likeable along with her various cohorts. The backstory is original & creative. Each book is action packed without belaboring any scene. The author has a lot of ideas of material to draw from.
A resounding YES these books are worth the credits. And you betcha I’ve already got another book by this author purchased & ready to go!

Everything you would want is a military space opera type story. Space battles, intrigue, assassins, mysterious poisonous reptile, and strong female protagonists. I am impressed in the diversity of plots and sub-plots held within. Narration was expressive while not being over the top. I have already recommended this to everyone I know! Now on to book 2.

good listen excited for the series

Great start to an interesting series

This isn’t my usual type of story but once I started I couldn’t stop, great story, interesting characters and the narrator did a great job of giving the characters life. I’m now going to start the next book!

Just a little too YA for my taste. But the premise was unique. Well written.

Different genre than my norm

This audio was available as a free promotion. It looked interesting so I tried it. The narrator does a good job. I struggled with narration when Ana was a child. Once she is older, narration was fine. This story is the beginning of Ana and her odd life with a symbiot that keeps her alive. Red the symbiot also makes Ana's life different from others. Red is valuable and makes Ana a target for attacks. You feel like there is more to Red (symbiot snake) in this book but nothing concrete is revealed yet. This book centers on Ana's beginning life through school and into her first job as an intelligence agent. I found it interesting. I like the world and the characters in Ana's life. Its the beginning of a sci fi saga that follows Ana and her team of agents in Naval intelligence. The book kept me engaged and I will check out next in series.