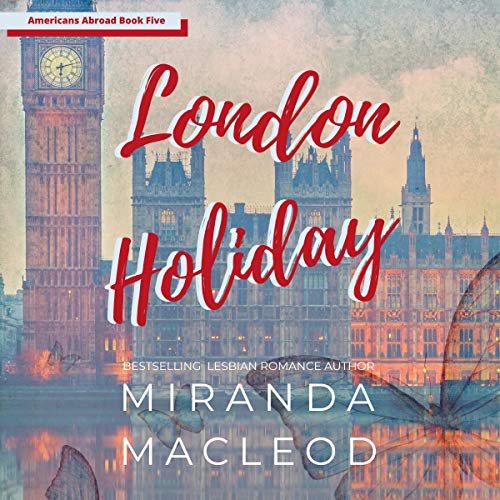 By: Miranda MacLeod
Narrated by: Stephanie Murphy
Try for £0.00

When a struggling journalist meets a runaway princess, will it be the story of the century or the love of a lifetime?

Jordan is an American journalist living in London, but when her newspaper is sold to an infamous tabloid king, she has one week to produce a tell-all story of the century or she’s out of a job, and out of the country. Then a runaway princess nearly falls into her lap. It seems like the answer to her prayers, but how can she write an exposé on a woman she’s falling in love with?

Abby was a typical California girl, until a twist of fate turned her into Princess Abigail, the heir to the throne of her father’s kingdom. When presented with an opportunity to escape her royal duties for a night out on the town while on an official state visit to London, she seizes the chance. But when she’s rescued by the woman of her dreams, she begins to doubt that she can ever return to royal life again.

As they have a madcap adventure exploring London together, both Jordan and Abby suspect they may have found their perfect match, but if the secrets they are hiding are exposed, will their relationship survive?

London Holiday is a modern-day fairytale inspired by the classic film Roman Holiday, with a lesbian twist. It is the fifth book in the Americans Abroad series of standalone romantic comedies. Don't miss Waltzing on the Danube, Home for the Holidays, Stockholm Syndrome, and Letters to Cupid for more stories of American women finding love with other women in distant places across the globe!

What listeners say about London Holiday

This book was great. Though I didn't think much of the Scottish accent, the narrattor did a great job.

Great sweet romance with a very good narrator, I enjoyed it very much both reading and listening to it

Miranda MacLeod is quickly becoming a favorite author. This is the second story I have read by her and it did not disappoint. I love a good royal story with a HEA. This fit the bill to a T. Stephanie Murphy does an excellent job narrating. I could listen to her voice for hours. Oh wait, I did😉. I’d definitely recommend this book to any romance reader.

I really liked the ending!

The reason I enjoyed this book so much is for the ending. The whole thing was light, witty, and clever, but the way the author handled the ending was refreshing.

SPOILER ALERT: We know we are reading a love story so I don't think I'll give anything away by saying it all worked out at the end. It's the way it worked out that made me applaud. Let's just say, if the typical love story has a stressful moment right before everything turns to bliss - this author treated it in a surprising way that didn't feel like the typical "everyone hates you now so you have to find a way to get back in their good graces". Instead of treating each other with blame and distrust, it was exactly the opposite. They trusted each other's judgment during the stressful part of the story and that was nice to read for a change!!

I’ve really enjoyed the Americans Abroad series that Miranda MacLeod has put together and this is a fun addition. Stephanie Murphy was the perfect narrator choice to capture the light hearted fun of these two characters and their romp around London.

What a fun story!

I love Stephanie Murphy’s narration of this cute and funny story about a princess and reporter falling in love. Seems far fetched in concept but Miranda does a great job making the story seem entirely possible.

A story similar to a Roman Holiday with a twist or two. Abby was heir to a small European, while struggling with the regulations and protocol. Wanting freedom if only for a short time, she embarks on that while she was in London. Meeting Jordan brought challenges, fun, and both have secrets.
Good story to enjoy and laugh with Abby and Jordan. Given ARC audio which was good for my voluntary review and my honest opinion

This story was non-stop fun! I loved the way the romance developed between Abby and Jordan it was hilarious and sweet. The London backdrop was full of life and I felt like I was alongside the characters taking in the sights. The audiobook format enhanced the storytelling with the narrator's soothing voice and entertaining accents. I'll definitely be revisiting Miranda MacLeod's 'London Holiday' in the future.

This is a funny, sweet and romantic story, a modern fairy take . Well written and narrated. I recommend Miranda Macleod books, a mix of romance and laughter, light and refreshing like rain in the desert. I definitely recommend it.

What I like of Miranda’s style is the fluidity for romantic comedy. It is always a treat and a great way to spend a good time, having a very gratifying reading. She never fails to put a smile on my face. This one is the fifth instalment of the Americans abroad series and it is inspired in the movie “Roman Holiday”.

It is a very beautiful, sweet story. Has very lovable characters with a glimmering chemistry and growing attraction. The description of the places they visit is very detailed and delightful, like being there. I enjoyed it very much and their misadventures made me laugh so much.

It’s a light and funny comedy, a real cute story. I loved the growth of the main characters, and the build-up of the romance. It is undoubtedly a wonderful fairy tale.

It is a very enjoyable book that I’d like to recommend.

It is narrated by Stephanie Murphy and she is the amazing. The way she brings the characters to life is so well done.

A fun love story. Miranda is an excellent story teller. So much humor, for me its the laugh out loud kind not just a smile.
Narrated by Stephanie Murphy who did an excellent job she makes the story come alive and adds so much to enhance the story.
i highly recommend this story, light, fun and so well done

This was almost word to word “Rome Vacation” but in London, I loved it, and the fact that it was a lesbian story was even better... sweet, well written but plot was well known...
Narration was excellent as usual.