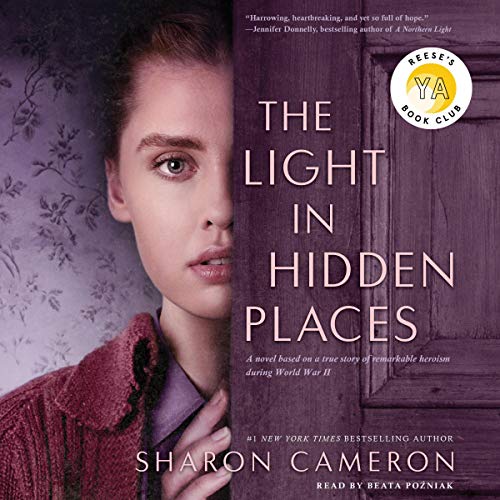 By: Sharon Cameron
Narrated by: Beata Poźniak
Try for £0.00

The extraordinary story of Stefania Podgorska, a Polish teenager who chose bravery and humanity by hiding 13 Jews in her attic during WWII - from number one New York Times best-selling author Sharon Cameron.

One knock at the door, and Stefania has a choice to make....

It is 1943, and for four years, 16-year-old Stefania has been working for the Diamant family in their grocery store in Przemsyl, Poland, singing her way into their lives and hearts. She has even made a promise to one of their sons, Izio - a betrothal they must keep secret since she is Catholic and the Diamants are Jewish.

But everything changes when the German army invades Przemsyl. The Diamants are forced into the ghetto, and Stefania is alone in an occupied city, the only one left to care for Helena, her six-year-old sister. And then comes the knock at the door. Izio's brother Max has jumped from the train headed to a death camp. Stefania and Helena make the extraordinary decision to hide Max, and eventually 12 more Jews. Then they must wait, every day, for the next knock at the door, the one that will mean death. When the knock finally comes, it is two Nazi officers, requisitioning Stefania's house for the German army.

With two Nazis below, 13 hidden Jews above, and a little sister by her side, Stefania has one more excruciating choice to make.

What listeners say about Light in Hidden Places

Walking in her shoes

Without giving anything away..the story of Stephanie and Helena and their heroism will live with me forever.Sharon Cameron’s work on Stephanie and Heal’s powerful story,and the wonderful narrative by Beata Poźniak.I found myself with my earphones on walking in her shoes,asking questions..

I can't recommend this enough and I think everyone should listen to it, especially to gain a better understanding of the devastation of this war. The story is brilliantly narrated and you listen with baited breath, hoping for the best possible outcome from every terrifying event. What's more extraordinary is this is all based on real people and real events, proving how remarkable some individuals can be when faced with a terrifying world.

A powerful and inspiring read. loved it

A powerful and inspiring read. Brilliantly written and narrated, an important and enjoyable book - a must read!

wow. what an incredible book, a heart wrenching edge of your seat story/memoir. how lucky we are.

I never have written a review, but I feel moved to write this one because it is not just another good book. It is a legacy of more sacrifice then I have ever herd, packed into these people’s lives. Thank you for this book. Thank you for the narration. I am honored to tuck this story into my heart for when I might need to remember their courage. Because I don’t think that anything I will face will be as difficult as the challenges in this book.

amazing gripping so true to your heart

Great narration. I could hardly put it down. Unbelievable story. Narrator has a beautiful authentic voice. Each character is uniquely portrayed, from the lead - a female loving teenager to a male Jewish postman struggling to survive, or a threatening nazi or just a kid neighbor. There is so much great detail in all those voices. Nice touch “behind the scenes” of having the author and narrator talking together. The power of faith and belief was the key for Stefania’s survival, the heroine who risks her life for saving Jews. Amazing WW2 story of such a young girl. Loved the narrators tone and pacing. Each character is so beautifully painted by her voice. Made the story come to life.

Listening is a real treat, especially for those who like to experience an authentic voice. Beata Pozniak delivers a stellar performance and brings to life all characters in this unforgettable story of a courageous teenager that risks her life to save Jews during WW2. As we find out from the bonus at the end of the audiobook, the reader and heroine were both from Poland. Grew up in the same country and then immigrated to America for a better life. Pozniak channeling Podgorska is so real and just a gem of a performance. Her authentic voice takes you on a deeply emotional voyage.

Wow! What an incredible book and what marvelous narration. Listening to it, I felt transported to Poland during the 1940’s. Beata Pozniak’s slight Polish accent gives such authenticity and immediacy to Fusia’s tale that it seemed to me as if the real Stefania was sitting beside me telling me her story herself. One of the things I most enjoyed is how the narrator uses her vocal technique to show how Fusia grows and adapts as the story develops. In the beginning, as the very young Fusia, Pozniak’s tone is light and exuberant, her cadence fast and cheerful. As Fusia becomes older, more tired, frightened or defiant, the narrator’s pitch deepens and her inflection changes to movingly illustrate Fusia’s emotions. I was impressed by how the female narrator is able to do such a great job voicing the male characters, making them all sound individual and distinctive. The timber of heroic Max’s voice is completely different from that of the handsome policeman Berdecki. What I found even more remarkable is that the German soldiers and officers all have a distinct accent from the native Poles, and the Germans who speak Polish have a slightly different one from the ones who don’t. I think my very favorite voice is the child-like one of the precocious Helena, who is very young but astonishingly savvy. Pozniak’s dramatization of her is a delight.
To sum it up, this is an amazing tale of how a young woman and her little sister sheltered thirteen Jews in close proximity to Nazi and German officials, sometime with the enemy living in the same house they were hiding the Jews in. It alternately thrills you and then breaks your heart. I found this story of true heroism and love against tremendous odds to be very inspiring and uplifting, and the narrator’s dramatic, empathetic performance truly made it come alive for me. Pozniak is one of my favorite narrators and I’ve eagerly listened to all the books she’s done. This is definitely her best.

This book is for young readers.

An extraoridary story with a good narrator. Unfortunately this is not a book geared towards adults. The editor does children's lit which should have tipped me off but I figured she'd moved to adult work. I am very disappointed and the field is still wide open for an excellent writer to do a masterpiece on the life of Stefania Podgorska.

I must admit that in the past I have been someone who did not enjoy reading period or wartime novels. This has recently changed and I am so glad that it did! this book is absolutely incredible, about amazing people who did such honorable things during the war to save the Jews and I was touched in so many ways by this. I cannot thank the author enough for bringing the story to light.

A Must Read for All Generations

This was such a beautiful telling of such a tragic and inspirational time. I am in awe of what Stefania and Helena did at such great risk to themselves and in particular given how young they were.

I highly recommend this to anyone interested in history and the great human spirit!

I love the story, very emotional, very educational, amazing heroism and beautiful true story. I didn’t like the narration. Sorry.

Struggling to finish this really loooooong, endless tale of not much happening. Have made it to Chapter 30, the sum of which could have been covered in a couple of quick chapters. The narration is doing little to help push me along. Way too much time spent on enunciation, fake (?) accents, and a super slow narration.
EDIT NOTE: Had I been privy to the epilogue and fantastic podcast presented after the book, BEFORE I read this book, my whole outlook about it would have been completely different! Being a little familiar with real life characters makes such a difference in learning about their struggles and feeling those with them as we read about them. Although I was at some point, aware that this was a "true story" having been reminded of that would have helped me so very much. All my blessings and prayers for those who survived these times of our world.