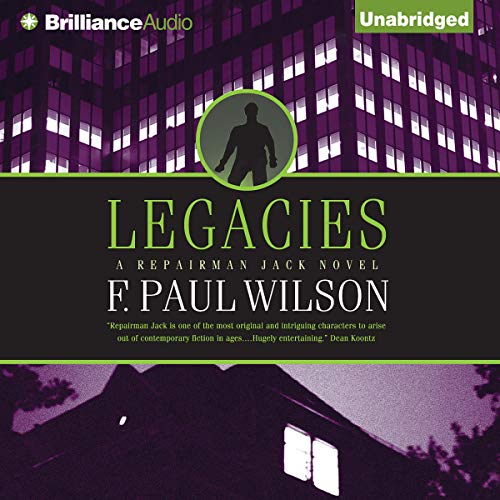 By: F. Paul Wilson
Narrated by: Christopher Price
Try for £0.00

Repairman Jack isn’t your average appliance repairman - he fixes situations for people, often risking his own life. Jack has no last name, no social security number, works only for cash, and has no qualms when it comes to seeing that the job gets done.

Dr. Alicia Clayton, a pediatrician who treats children with AIDS, is full of secrets, and she has just inherited a house that holds another. Haunted by painful memories, Alicia wants the house destroyed - but somehow everyone she enlists to help ends up violently killed. The house holds a powerful secret, and Alicia’s charmless brother Thomas seems willing to do anything to get his hands on that secret himself.

But not if Repairman Jack can find it first!

“Jack is righteous!” Andrew Vachss“The Tomb is one of the best all-out adventure stories I’ve read in years.” (Stephen King)
“Repairman Jack [is] a Byronic hero fans have begged to see again for more than a decade. Legacies is a righteous follow-up....The book is a lot of fun, and Wilson has promised that Jack will be back soon.” ( Rocky Mountain News)
“F. Paul Wilson is a hot writer, and his hottest, and my favorite creation, is Repairman Jack. No one does this kind of weird meets crime better than Wilson. Gripping, fascinating, one of a kind. That’s F. Paul Wilson and Repairman Jack.” (Joe R. Lansdale)

What listeners say about Legacies

Good but not as good as the first one.

I love this series and this is a good book but the first was twice as good.


Christopher Price does an excellent job taking over the narration from Alexander Cendese and the sound quality is good.

What made the experience of listening to Legacies the most enjoyable?

Wilson has that knack of engrossing the reader/listener. He makes the character's world so believable that you just slip in alongside them as if you are standing behind them. He is not one to over-complicate stories by being too descriptive or by trying to baffle you with science. You just sit there and enjoy the roller coaster rides!

What other book might you compare Legacies to, and why?

It's difficult to compare with another book as I think that the character of Jack is so unique. But I would recommend that anyone looking to get into the series start with 'The Tomb' a truly must read book.

What does Christopher Price bring to the story that you wouldn’t experience if you had only read the book?

As I have read elsewhere on the site, 'a good story teller should be that you do not think of them when listening', and this is true of Mr Price. He brings life to all the characters without being over the top.

Without giving too much away, but towards the end when the doctor opens up to Jack....brought a tear to my eye.

The Repairman Jack series is one of the series that once you have started you cannot stop listening too.

AS
an avid reader of science fiction come conspiracy thrillers this the second book off the series set's the pace for what's to follow.
A must for a wet afternoon.

Prefer the narrator of the early years....

The narrator makes the story more interesting, too bad it not the same narrator as the early years stories of Jack The Repairman!

Kind of a silly premise

After listening to The Tomb recently, I decided to listen to the rest of Repairman Jack, just for old time's sake. It was wonderful to see Jack back in action. F. Paul Wilson still has a good sense of Jack's resourcefulness, violent urges, and strong integrity.

However, for a sequel so long in the making, the MacGuffin in this book is surprisingly sketchy and poorly researched. Jack and his new lady in distress, Alicia, struggle against an oil consortium over broadcast power. Broadcast power is presented in this book as a new technology that would obviously wipe all need for oil from the world almost immediately, if it ever got out.

I imagine I can't be the first want to bring this up, but broadcast power was invented in the 1800s by Nikolai Tesla. Back then, it was known as "Indirect Current." To hear it presented here as a world-changing technology in the modern day was a big disappointment.

Aside from the somewhat insulting story premise, it was still a better vampire story than Twilight.

What made the experience of listening to Legacies the most enjoyable?

The main character is fascinating strange but believable.

What other book might you compare Legacies to and why?

Pretty unique a mix of Columbo, Jack Reacher and Buffy

I hope that Audible will add the missing books of the series soon.

I really enjoy F Paul Wilson's Repairman Jack series, but listening to Christopher Price is like listening to fingernails on a chalk board. Sounds like he loves the sound of his voice over what he's reading. i hate how he over-enunciates vowels and makes the characters sound alike. I'm struggling to get through this book as I try to ignore this guy's voice. Hopefully I'll get used to it eventually.

In this book, F. Paul Wilson continues to build on Jack's story. He gets mixed up in helping a doctor who has inherited a house that she really doesn't want for reasons that show up later in the book. It turns out it holds the key to a mystery, which Jack figures out. Unfortunately, there are others in the background who want that key for themselves.
The book is read by Christopher Price and I have to admit I liked the narration by Joe Barrett better. Still, he did a very good job once I got used to him.
Five stars again, all the way and I'm starting on the third book, Conspiracies, as I write this. Great series.

It was a Decent story, but the narrator’s raspy voice for female characters was off-putting. The office hacking scene was particularly entertaining.

Not for someone with Children

Not a very good follow up to the tomb which was a fantastic novel and really got me interested in this series. If you have small children you may want to pass on this one. There are heartbreaking moments with children and its hard to get through. The ending doesnt do enough to fix this problem. This was my opinion and I will check on more books to see if things change.

An Unwanted -- but Much Coveted -- Legacy

"Legacies" falls almost -- but, fortunately, not quite -- into the Psychological Thriller genre. Unlike its predecessor in the Repairman Jack series -- "The Tomb" -- "Legacies" does not contain any supernatural components; but, rather, unfolds a compelling mystery. Spoiler-haters should, perhaps, stop reading here; but I honestly don't think that you will regret learning the kernel of this story ahead-of-time, since "Legacies" will still remain a gripping audiobook. Like any novel concerning a discovery that would have changed the world -- had it really been discovered -- author F.P. Wilson has to figure out a way to "un-discover" the scientific breakthrough at the heart of "Legacies" -- in this case, an inexhaustible source of clean energy -- before the book ends. I looked forward to seeing how Wilson would manage this "un-discovery" at the end of "Legacies," and he did not disappoint me. (No, I won't spoil the surprise 𝘵𝘩𝘢𝘵 much: You will just have to listen to the audiobook to learn why we do not now have this much-needed discovery!) I liked the way that Wilson 𝘨𝘳𝘢𝘥𝘶𝘢𝘭𝘭𝘺 -- ever so slowly -- introduces us to the bad guys -- Saudi princeling Kemel Muhallal (remember that "Legacies" was published back in 1998, well before 9/11); his mercenary muscle-man, Sam Baker; the enigmatic Japanese agent, Yoshio (who turns out to be not such a very bad guy, after all); and co-protagonist Alicia's detested half-brother, Thomas -- whose nefarious motives we must learn at the same pace at which Repairman Jack laboriously uncovers them. "Legacies" keeps us on the edge of our seats all the way through the audiobook, wondering why Alicia does not want her father's legacy, and why seemingly everyone else does. I deducted a star from my rating of narrator Christopher Price's performance, only because Joe Barrett -- the narrator of "The Tomb" (the previous Repairman Jack audiobook) -- did a better job; and I wish that the publishers had continued to use Mr. Barrett to narrate the rest of the series. Mr. Price does an adequate, if not stellar, job of narrating "Legacies," although he mispronounces some uncommon words -- like "antimacassar" -- and some common words, like "Julio." Also, Mr. Price doesn't have the repertoire of voices and accents that Joe Barrett has. (I loved the way that Mr. Barrett voiced Yiddish character Abe Grossman in "The Tomb." Mr. Price just doesn't even try ... not that I blame him.) Otherwise, I highly recommend "Legacies" to all thriller-lovers, although you will enjoy it even more if you listen to "The Tomb" first.

Senseless use of God's name.

God used as a profanity in this book is a dishonorable shame. I will never understand why Wilson chose to use it in his books.

I don’t like bashing a book,realizing the effort it took,but maybe bad reviews help change bad writing. First mistake is telling,telling,telling!! Good lord, you’re not left to imagine anything! Every thought,every reasoning is blathered on about. That blather is stilted, sophomoric and just plain “no one EVER dialogs like that”! It sounds like a kid’s writing. The narrator does the best he could with the words he has to say. I think I chose this because I had heard a Repairman Jack story before and enjoyed it, should have skipped this one.