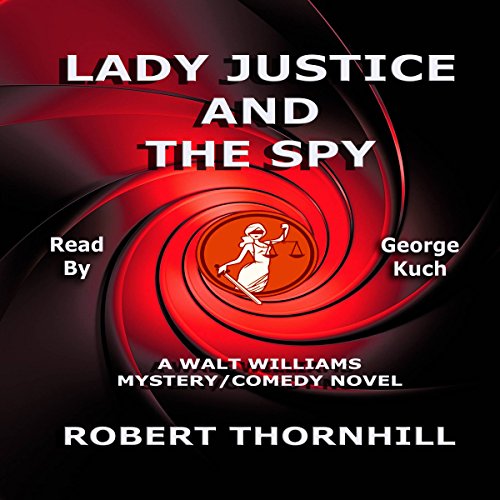 Walt and his senior sidekicks match wits with a killer clown and an assassin hired by Big Pharma to murder a holistic physician working on a cure for cancer.

Things were going bad when a mysterious government spy appeared to save the day, but this spy had an ulterior motive, and it involved a member of Walt’s entourage.

Chemtrails, conspiracies, and clowns are a recipe for disaster, but Walt and Lady Justice prevail.

I spy with my little eye another great book

This is another cleverly crafted plot with mystery and humour that I really enjoyed. The plot is intricate mini stories that are all woven together and connected to a fun bunch of friends. I like the mystery but it is the group of characters that make this series what it is.
Walt's brother-in-law Kevin's new wife is planning her school reunion but her friend brings some disturbing news to her attention and they in turn bring it to Walt. A high number of girls have died from there year group but as the death have been all over the country nobody has looked into them, until now. With a killer on the loose they still go ahead with the reunion, the party gets two gate crashes that will change lives for ever. Soon after that eventful night Walt is approach by a holistic physician who is in fear for his life. Is Walt finally ready to take on the big drug companies or even his own government over the chemicals being sprayed in the air? Maybe he has finally found the one person brave and skilled enough to try.
George Kuch never puts in a bad performance as Walt and his friends.

This is way out of our league

All of Robert Thornhill's Lady Justice books are crammed with combinations of independent characters, comedy, crime, well researched conspiracy theories, action, adventure and sometimes, as in Lady Justice and the Spy, all of the above. And, on yes there's a spy, too, a woman, codenamed Nightshade who, after decades in a covert branch of the CIA, wants to retire and track down the daughter she gave up at birth. From homicidal clowns, through murdered doctors researching a better way to heal cancer, through to the threat to the world from chemtrails in the sky, the seventy something P.I. and his pals are kept busy and creative throughout.
Never a dull moment. Always thought provoking yet humorous, this series continues to be one of the most engaging on the market. Start anywhere - they are all stand alone. And brilliant. Thanks again, Mr.Thornhill, for another great story, and also to George Kuch, the excellent narrator interpreter of Walt Williams, realtor, ex cop and now private eye.

The feisty seniors are at it again and when things are looking bleak, they get some help from an unexpected source.

While we are treated to a new case, we also revisit a couple of prior cases. I would highly recommend reading the prior books in the series to appreciate it fully.

The writing and narrating duo of Robert Thornhill and George Kuch have done it again!

Lady Justice and the Spy. Book 25

George Kuch brings another story to life with his excellent narration.

It really gets you thinking

Lady Justice and the Spy is my twenty-fifth enjoyable read/listen from author Robert Thornhill. Another entertaining clean read, filled with puns, one-liners and references to books & songs including the narrator singing. Throughout the book I found myself smiling a lot & at times laughing out loud. Each book in the series seems better than the last as Thornhill continues to up his game. Narrator George Kuch again adds greatly to the listening enjoyment with his wide variety of entertaining voices & inflections, Kuch IS Walt Williams! I’ll definitely be reading more from Thornhill! I was given an Audible copy of this book & am voluntarily reviewing it. Up next is Lady Justice and the Cat. (RIP Marley January 20, 2014 - July 24, 2018).

ok, i really love the "basic" of these books I love Walt and the trouble he always finds himself in with the whole reunion part of the book... BUT that was only half the book... the other half was just more conspiracy theory/government coverup/big pharma crap. It took me forever to even get through this book just because i am soooo sick of all the political/conspiracy stuff that really could be totally left out of the book in my opinion and it would have been 100 times better. When i first started this series it was more about Walt and his friends and their hijinks which were fun and enjoyable to listen to, now it's 99% conspiracy and authors opinions, and "if you don't agree or jump on the bandwagon then you are just sheep" type feeling i get from listening to this book.

I was given this book free for an unbiased review

I'm just lazy enough to let the author do all the research, put it together in a book in a series I adore, and then verify his research. It all checks out.
Most important, however, is the fun and hijinks in the stories and the characters that populate each of them. This one delves into some of the shady dealings of a big pharmaceutical company, surprising aspects of one character's background, and lots more, but the Dad Jokes and other humor are as much fun as ever!
I need the audio and it really helps that I can listen to George Kuch at the speed I need at that time.

Can't get enough of this series!

The author provided me with a complimentary copy of this audiobook with no expectation of a review. I absolutely love the Lady Justice series. I hope this series never ends. I know that's unrealistic; all good things must come to an end eventually. This series is fun, clean, has more twists than a Twizzler, and the subject matter really makes you stop and wonder if it could be true. I don't know how Robert Thornhill comes up with the ideas for the books or if the subject matter is completely fiction but I hope he never runs out of ideas (and that Big Brother doesn't decide he's a threat and take him out LOL)!

Walt is a unique character , along with his friends and partner , will have you looking at world events in a humorous and sometimes controversial way.. I highly recommend reading the first books before delving into this one just to get a grip on the adventures of Walt and his enterage ”
"I was voluntarily provided this review copy audiobook at no charge by the author, publisher and/or narrator."

How does Robert Thornhill do it over and over again and keep you so interested. I don't know how to answer that but he does and I for one am so grateful. This audio book finds Walt and his crew in the mists of a crazy clown and throwing a high school reunion. I know!! You have to read it to get it but it is so worth it :-) Once again George Kuch does the best job of narrating too.

The saga continues about chem trails. Now that the killer clown is dead and Veronica’s mother has been retired what is next? Will chem trails finally be brought to their knees? Will big pharma be exposed? I can’t wait to see what will happen next.