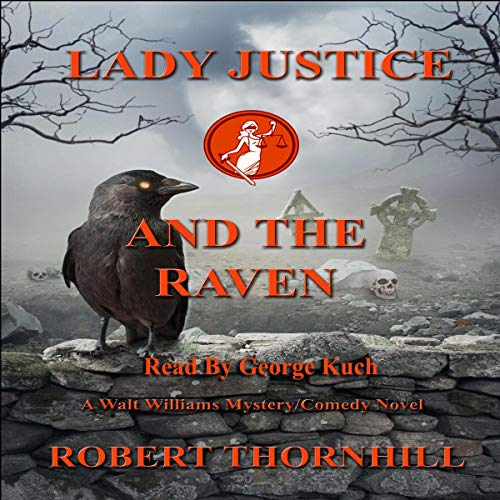 Lady Justice and the Raven

Lady Justice and the Raven

Walt discovers a manuscript hidden in the false bottom of a cabinet Maggie bought at a craft fair. The manuscript, written by a woman named Lenore, tells the tragic story of a life filled with abuse, incest, and finally, murder. Drawn in by the story, Walt becomes entangled with members of the family whose lives mirror characters in many of Edgar Allen Poe’s Gothic novels.

Accompanying Walt on this curious journey is a raven that guides Walt through the terrifying and often dangerous encounters with this family, whose lives are filled with tragedy and remorse.

Will Walt prevail, or will he succumb to the evil curse that has plagued this troubled family for four generations?

On a dark stormy night

This book was a bit different to what I have come to expect from a Robert Thornhill story and although I did enjoy I couldn't help but feel what was going on? It was less a mystery and more a treasure hunt, as each little goings on was solved by a book by Edgar Alan Poe and his black Raven. The gang was all there so did have some lighter moments but it was strange. I would still recommend if just because I like Robert's books and would love to know what you thought of it.
When Maggie picks up an old trunk, Walt is plagued by a black Raven that seems to want him to do something. Is is track down the son and daughter that killed the father who abused them? Or is it save the wife whose husband is reaching boiling point? Or find the twins that where conceived by the abuse? During a dark and stormy night Walt Williams attempts to do it all added by his partner Kevin and the mysterious Raven. Can the pair find a happy ending or was the fortune teller right when she turned over the castle card, the darkest card in the pack.
George Kuch once again puts on a really good performance.

Man with hole in pocket ...


Walt Williams, retired realtor and ex policeman, returns to tell us of his and partner P.I. Kevin's recent bizarre cases involving a raven and the works of Edgar Allan Poe. This is number 39 in the series a!ways guaranteed to make the reader smile if not laugh aloud. Most of Walt's friends, including Mary and Jerry, make an appearance, too. A bit different, though, in that this time it really was a bit too strange to be true.

George Kutch is Walt, the elderly crime fighter, storyteller and witty raconteur, as he has been since the start of the Lady Justice books and is, as ever, perfect in the role. He talks direct to the reader, drawing us into his confidence. And with every story standa!one, the books, all 39, can be read in any order. Highly recommended, as are all the books in the series.

Another great installment in the series

The author provided me with a complimentary copy of this audiobook with no expectation of a review. This book is filled with references to Edgar Allan Poe's works. You won't believe how they tie in with the cases that Walt and Kevin get involved in. Just know that this book is another great book in the series and is filled with several LOL moments.

NOTE: I was first given a free review copy of the audiobook at my request but due to some technical problems I could not use that file at all so I bought a copy through Audible, too - and here's my review of it:)

If you're a fun of E. A. Poe you'll love the book; if you're a fun of rather dark tales bordering on Gothic, you'll love this one; if you don't mind the absurd levels of coincidences and improbabilities in a story, "Lady Justice and the Raven" is just for you...:)
It's a very short listen for a mystery novel, but it's entertaining, full of black humour, uncanny twists and quirky incidents and characters. And it keeps you waiting and guessing and discovering which of the many stories by Poe is going to be used next as a source of inspiration...:)

Narration by Mr Kuch is very good, it kind of stays in character with the tone of the book, adding to the overall Gothic atmosphere. Individual characters are recognizable and the speed of Mr Kuch's reading is quite all right. It's a very well done interpretation of the book.

In general: it's my first in the series and I think I'll return for more.

Definitely a tribute to Poe

First off, I have to say this is my first book in this huge series. I don't know anything about the other books but this was iffy for me. I do like Poe, but this was a little more Poe than I cared for. It began to be somewhat predictable and seemed to go on and on. That being said, I did like it and did listen until the end. The narration was very good. I was voluntarily provided this review copy audiobook at no charge by the author, publisher and/or narrator.

I love this seies

Book 39 in this great series Lady Justice. I am proud to say I have read all of them and loved them all. Walt and the gang never fail to make me giggle and shake my head. This book had a fun twist in that the story line followed many of Edgar Allan Poe's books. So fun even if its been years since I had read any of Poe's books. George Kuch is the narrator again and he is just plain wonderful. I hope this series never ends. If you have not read any of these you really must give it a go. I just got my husband listening to them and he is hooked too.

Walt Williams and gang are back, this time a mystery with eerily similar story to an Edgar Allan Poe story! The characters are likable and believable. The storyline is interesting and entertaining! The narrator did a great job! I received a free copy of this audiobook at my request and have voluntarily left this review.

Each book in the series bring fun and adventure. I always laugh and enjoy all the little things that become incorporated into the main storyline. Can't wait for the next one.

another great story from Thornhill<br />

I really enjoyed this story, the ravens added a great bit of mystery to the story. Another great story from Thornhill. Definitely worth your time!

Robert Thornhill has written a great tribute to Edgar Allen Poe in Lady Justice and the Raven. I love how he incorporated facts with current events and fiction. His vivid imagery and humor are so well balanced, the characters of Walt, Maggie, Mary Murphy are so endearing. I loved how the hidden manuscript was related to several of Poe's poems. and found it perfect especially for this time of year. The author is fantastic in presenting issues that face us, and this one is also thought provoking. George Kuch performs this book flawlessly. He is wonderful bringing the characters to life. I cannot recommend The Lady Justice series enough, they are thought provoking, humorous, and have great storylines and endearing characters.

An ingenious twist on Poe's books.

On a serious note, his story on nursing home abuse is sobering.

This installment is chilling, and right on time for Halloween. Some aspects of it are very dark, but yet Robert Thornhill found a way to tell the story with grace and a bit of humor to lighten it up. If you love the creepy genre & you love mystery’s then this is the perfect blend of the two!