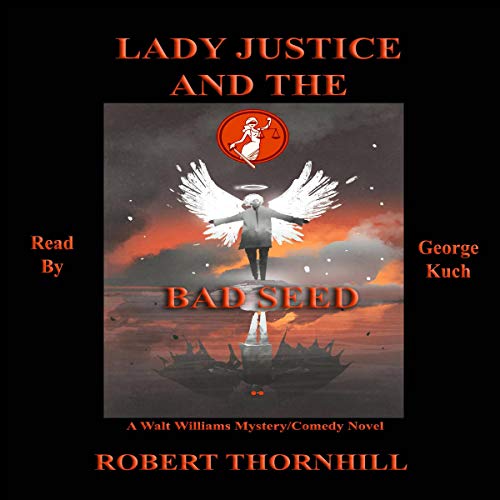 Lady Justice and the Bad Seed

Lady Justice and the Bad Seed

Walt is surprised to learn that his old partner, Ox, has a brother. Ox had never mentioned Lenny who was serving time in prison.

Ox was just as surprised when Lenny showed up at his door claiming he had found religion and turned his life around. He was even more surprised to learn that his brother, the bad seed of the family, was now an ordained minister.

As Lenny’s ministry grows by leaps and bounds, Walt and his friends are skeptical. Was Lenny’s conversion real or is it an elaborate con?

Walt is faced with the age-old question - can people really change? What do you think?

This is not a bad book

I enjoyed this book but then again you can pick up most of the books in the lady justice series and know you are going to enjoy them. It is the characters that make this such a good series with there humour, luck and connections you know they are going to get into lots of trouble but it will turn out alright in the end. There are not many series that make it to 38 but this book proves that Robert Thornhill and the narrator George Kuch still have the magic.
Walt's partner from his policeman days gets a surprise in the form of his brother, who has been in prison, knocking on his door. Has he really changed his ways and found God? Now that he is out on the streets the small church he formed is out and about helping the less fortunate and some how a tv crew is following his every move. As his good works and popularity grows so does he congregation and his coffers. His is really doing it from the goodness of his heart or is there another reason. The local mob boss thinks otherwise and Walt, Kevin and Ox aren't the only ones keeping a careful eye on him.
As I said above George Kuch has a skill that makes these books so enjoyable.

Not as good as others in the series

The author provided me with a complimentary copy of this audiobook with no expectation of a review. I didn't enjoy this book as much as others in this series. It wasn't funny like the other books and the plot was pretty predictable. Also, there was a major inconsistency in this book. Kevin's wife "Veronica" is referred to as "Victoria." I've notified the author of this error. I still recommend getting this book as it continues to expand the relationships of the characters.

Lady Justice and the Bad Seed focuses on Walt’s old partner’s brother, the smooth talking ex-con. The characters are likable and believable. The storyline is interesting and entertaining. The narrator did a great job! I received a free copy of this audiobook at my request and have voluntarily left this review.

Each book in the series bring fun and adventure. I always laugh and enjoy all the little things that become incorporated into the main storyline. Robert Thornhill does it again.

So I have read every book in this series and I have enjoyed all of them. George Kuch has narrated them all and done an amazing job. I can't imagine anyone else narrating this series he is wonderful. So this book touches on an excon who takes to being an evangelist. He is just doing a con and I thought this is not something I want to read but let me say I trusted Robert Thornhill and of course I loved this book. I don't want to give anything away but it is a must read :-)
I was gifted this book with the understanding that I would leave an honest review.

Lady Justice and the Bad Seed is my thirty-eighth enjoyable read/listen from author Robert Thornhill. Another entertaining clean read, filled with puns & one-liners, as always dealing with current social topics. Each book in the series seems better than the last as Thornhill continues to up his game. Narrator George Kuch again adds greatly to the listening enjoyment with his wide variety of entertaining voices & inflections, Kuch IS Walt Williams! I’ll definitely be reading more from Thornhill! I was given an Audible copy of this book & am voluntarily reviewing it. Up next is Lady Justice and the Raven. (RIP Marley January 20, 2014 - July 24, 2018).

As always a great story

I really enjoy this author/narrator dou. They really bring the stories alive. I was given this free review copy audiobook at my request and have voluntarily left this review.

great book, I wished it was longer. good story! l really like the narrator. a must listen!

A roller coaster ride of emotions!

I cheered him on, felt disappointment, and then hoped he'd get his comeuppance! In the end, it was a story of unconditional love and forgiveness.

I absolutely love this series as they have serious situations with humor. In this book Ox’s brother Lenny is released from prison as an ordained minister and has been collecting unusual donations which Walt and Ox feel his brother is still a con man and go out to prove it. Will Lenny stay on the up and up? I love all of the characters especially Walt and his extended family. Great narration as usual. Highly recommend if you enjoy mysteries with humor. Keep them coming! I was given this free audiobook by author and have voluntarily left this review. THANK YOU!!!!

A reformed man, or a con artist?

This installment of the Lady Justice series was another hit! Each book discusses a cultural topic by showing you both sides of a story, and often showing you the inner workings of how the criminals are operating/thinking. This book tackles the topic of televangelists, and more so the ones who scam their congregation. On the flip side it tells the story of a man who came out of prison and turned his life around by finding God and becoming a pastor. The story has mystery, suspense and lots of laughs along the way. I am a big fan of this series, and this book was another home run!