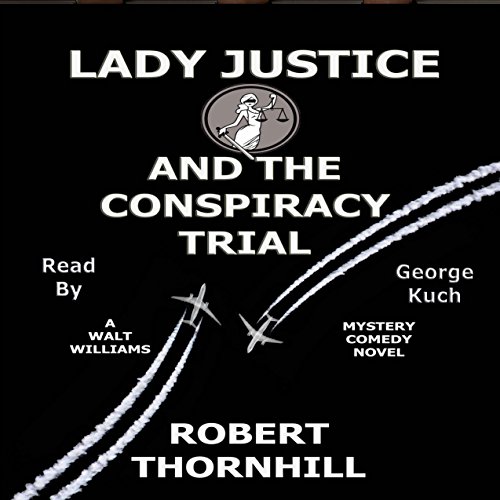 Investigative reporter Jack Carson has been murdered, but by whom?

Police arrest mob boss Carmine Marchetti, but Walt is convinced that it was the work of government assassins, sent to silence the reporter before he could expose a clandestine program that for decades had been spraying deadly chemicals into the atmosphere for weather control and defense.

Will justice prevail, or will the government’s dirty little secret remain hidden?

What listeners say about Lady Justice and the Conspiracy Trial

Walt is back in this very enjoyable book. The one thing I will say is you must read or listen to Lady justice and the conspiracy before this book because it continues from where that book left off. Other than that sit back and get lost in the hilarious world of Walt Williams because where else would you find a ninety year old buying a gun or jumping out of a cake or a 75 year old man dressing up in drag? It also has it serious side to the story, that of murder, government conspiracy and the mob. Like always the without leaves you thinking and questioning what do we really know about what goes on in the world we live.
The body of missing reporter Jack Carson has been found in its watery grave, leading the police to believe they finally have enough evidence to arrest mob boss Carmine Marchetti. His new friend Walt believes otherwise and now owning Carmine for rescuing him and his wife Maggie he reluctantly agrees to help his defence team prove him innocent of that murder. Walt knew what Jack was working on and the number of people connected to the case that have disappeared and even though he promised Maggie he would stay out of it he can't help himself especially as he has an envelope from a dead man hiding in is safe. Can Walt get a mob boss out of jail and keep his friends and family safe, from the government and the people that know everything?
George Kuch once again brings Walt and his friends to life in a brilliant performance.

Hook in front and rotate to the back.

Yet another superb Lady Justice book from Mr.Thornhill, one of - no, correct that - the only long running series peopled with eccentric, colourful, lively (despite their usually senior years), warm and, brave and often funny characters, and every one of them so real they've become family to this reader. And Walt, himself, the elderly ex realtor, turned cop in his later years, then P.I.who relates his marvellous stories, at times grouchy but always trying to give Lady Justice a hand. But the books are also far more than that, highlighting genuine injustices, whether perpetrated on a small scale or by government, always well researched, informative and thought provoking as well as throwing in jokes and tidbits of information along the way. And each entirely stand alone. Simply amazing, and such fun.

This time, Walt again looks to the skies and the trails left by the planes, a follow up to his earlier Lady Justice and the Conspiracy, when the body of Walt's journalist friend is discovered two weeks after his disappearance and the wrong man, Salt believes, is put on trial for the murder. But although a part two,, the book is skilfully delivered so that it is not necessary to have read the earlier one to get a full impact from this. As usualy, there are other side stories interwoven with the main theme, and plenty of humour, too (yes, Gerry puts in an appearance).

George Kuch again becomes Walt as he narrates, first person, Walt's ongoing stories and his thoughts and observations as well as giving voice to everyone else. The whole is a perfect package of writer, reader and a great cast of characters.. Thank you, Mr.Thornhill, for freely gifting me a complimentary copy of Lady Justice and the Conspiracy Trial. As with all of the books in this series, highly recommended.

I can’t say how much I enjoyed the past two books. It really is a lot to think about and I have started actually researching to see what is fact versus fiction.

This one definitely gets more intense as the book goes on and had me staying up just to finish the book and see what happens. On a side note, I also love how Robert Thornhill has put himself as a character in his own books and leaves you to question everything as to what is real and what is fiction.

The conspiracy continues... the body count continues to rise, and if Walt isn’t careful, he, or one of his friends, could be next...

Robert Thornhill continues to wow with this Lady Justice series. I am so invested... the characters are like old friends. The storylines are well thought out and extremely interesting.

George Kuch IS Walt Williams. I can’t imagine any other narrator for this series.

An excellent follow-up for the last book, Lady Justice and the Conspiracy. Walt finds himself becoming friends Carmine Marchetti, a mob boss who was arrested for murder. Mob boss, government conspiracy, murder and tons of laughs.

George Kuch is and has been since the first book, on my top 5 list of favorite narrators.

Lady Justice and the Conspiracy Trial is my twenty-second enjoyable read/listen from author Robert Thornhill. Another entertaining clean read, filled with puns & one-liners, as always dealing with current social topics. Each book in the series seems better than the last as Thornhill continues to up his game. Narrator George Kuch again adds greatly to the listening enjoyment with his wide variety of entertaining voices & inflections, Kuch IS Walt Williams! I’ll definitely be reading more from Thornhill! I was given an Audible copy of this book & am voluntarily reviewing it. Up next is Lady Justice and the Ghostly Treasure. (RIP Marley January 20, 2014 - July 24, 2018).

Conclusion to the conspiracy

Can't think how I missed writing a review on this one, maybe because it is basically Part 2 of the exploration of a government cover up. I never miss reading a Lady Justice book at least once, for the humor and camaraderie if nothing else! The writing is excellent, the characters are engaging, and the reality parts are well researched and verifiable. This one does go better after reading Lady Justice and the Conspiracy.
George Kuch continues to be excellent as narrator!

Will the truth be revealed?

The author provided me with a complimentary copy of this audiobook with no expectation of a review. In a way, this book was a continuation of Lady Justice and the Conspiracy. We find out what happened to reporter Jack Carson. Once again, the question is raised of whether or not the government is poisoning us with the seemingly harmless white trails crisscrossing the sky. Will we ever know the truth?

Not sure how Robert does it but he has done it again. Another wonderful book in this series Lady Justice. This is book 22 and they are all great. I have read all 22 and each has a different but important statement. Just loving this series. George Kuch does an incredible job of narrating this series. He is the voice of Walt Williams for sure. I was gifted this book with the understanding that I would leave an honest review.

I was blown away by this listen. Robert Thornhill wove such an incredible and realistic story into one. I love the way this book flowed with all of the tidbits from previous books included and the characters. This book is so thought provoking, and well researched. The imagery, the humor, the characters all add to the facets of this gem. Chem trails have never been more noticeable to me than they are now. There is not enough praise for this book or the series. I love the quotes included in this book and how appropriate they are to the story. Each time I listen to a book by Robert Thornhill I get new insights into current events. I loved the unexpected twists this book had. George Kuch did another outstanding performance with all of the characters in this book. He adds so much to the enjoyment of listening to this series. I will most definitely listen to more books by both the author and narrator. Without giving away spoilers, I must say the ending both surprised me and was so fitting for this book. Well done!