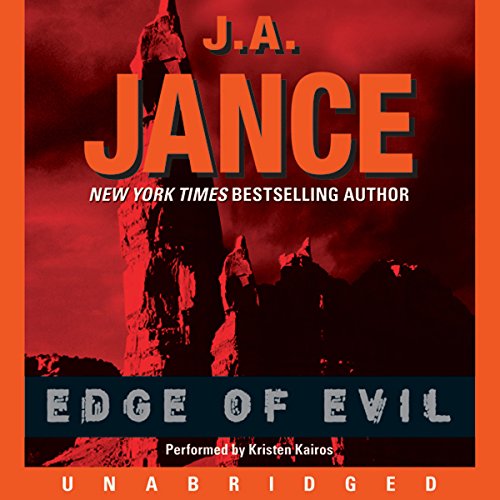 By: J. A. Jance
Narrated by: Kristen Kairos

The end of her high-profile broadcasting career came too soon for TV journalist Alison Reynolds - bounced off the air by executives who wanted a "younger face". With a divorce from her cheating husband of 10 years also pending, there is nothing keeping her in L.A. any longer.

Cut loose from her moorings, Ali is summoned back home to Sedona, Arizona, by the death of a childhood friend. Once there, she seeks solace in the comforting rhythms of her parents' diner, the Sugarloaf Café, and launches an online blog as therapy for others who have been similarly cut loose.

But when threatening posts begin appearing, Ali finds out that running a blog is far more up-close and personal than sitting behind a news desk. And far more dangerous. Suddenly something dark and deadly is swirling around her life...and a killer may be hunting her next.

What listeners say about Edge of Evil

this book by JA Jance about Ali Reynolds is a good listen the narrator brings the book to life Definitely recommend it.

I just loved this audiobook

this book was a good listen with brilliant characters.It was addictive and had me gripped.
I loved this storyline.

Ok book, definatly not a page turner. The weird music that cuts into the story at times is because this book was first made as a book on tape. The music lets you know its the end of the tape and not the end of the story. When it was transferred to digital file the music was not edited out. Hope this helps.

The series gets better. Much better.

Let me say first, I'm a HUGE fan of J. A. Jance. I've read most of the print copies of her gazillion books, and have purchased eight of her audiobooks, mostly the Johanna Brady series. This was my second Ali Reynolds -- which is a good thing: if I had listened to this one first, I never would have bought another.

First of all, this has to be one of the worst-produced audio books I've ever listened to. At random moments, some peppy, jazzy, supposedly uplifting elevator music interrupts the reading, sometimes drowning out the narrator's voice. It's so inappropriate - what on earth was someone thinking?? It's not chapter divisions, one such interruption was mid-sentence. Totally weird -- and completely destroys whatever mood the book was building toward.

Then too, much of this book is told in the form of blogs, which might work well on paper, but in an audiobook, not so much. Listening to the narrator's letter-reading voice has a limited appeal - nothing happens, no action or interaction with someone else, just pretty darn dry statements of opinion and articulation of thoughts.

Finally, a word for authors out there, even really really good ones, like Jance: Perfect people get pretty boring after awhile. It's all well and good to create a laudable character -- not ALL protagonists have to be "flawed". But there has to be a limit. If I wanted to engross myself in completely selfless behavior, I guess I'd opt for Butler's "Lives of the Saints" instead. At least those were real people. Just how perfect is our multi-fired, multi-sued, widowed, about to be divorced nee widowed girl, who always-and-forever puts everyone else on the planet's wishes ahead of her own? One example: a consummately evil man has broken into her home and is beating her to death. In the last possible second, she breaks away, gets her gun, and shoots him to death. Then we have to put up with an agony of soul searching, as Ali beats her breast over what she did to the man's MOTHER -- not anyone she knew, of course, just the woman who had given birth to this monster. "What must she be feeling? I killed her son!" Ali ponders.... well, I don't know what the mother was feeling, assuming she felt anything at all. But I guess if it were me, having marginally survived such a brutal attack, I really don't think fretting about his mother would be at the top of my list of worries -- but then, I'm not a saint. Thank Gd.

All this is overlaid with Ali's (more understandable) agonizing over the supposed suicide of her best childhood friend. She feels guilty for not having... well, you can imagine. Bottom line: too much agonizing, too much introspection, too many selfless goody-goody acts from a woman who, supposedly, was once a nationally-famous news reporter, who absolutely MUST, at some point, have kicked serious butt to have attained THAT.

One good thing: we get to find out where Sam the cat comes from, which solves that mystery. As for the rest of it, give this one a pass. The subsequent Ali Reynolds books are pretty good. I guess this was just the practice book.

the recording was good until you threw in THAT music. it really (killed) the vibe of the story. excuse that expression. I was really into the story then that music was really awful.

Story good. Too much blogging

The story itself was good. The reader, excellent. But the insertion of the blogging was just tiresome. We've read a lot of her books, but if this is how the series of Ali continues, we're done right here. Way. Too. Much.

Good story the only thing that I didn't care for was the music. It seemed very odd.

Edge of my seat

Edge of evil is the beginning of another series by J. A. Jance, starring Ally Reynolds. She is a tv news anchor who is fired because of her age, and she won't stand for it! Then her childhood best friend is found dead, and she has more to think about than losing a job. I really enjoyed the writing here, it sounded more like a real person's life, with several story lines that are handled admirably. I read this book when it first came out, and enjoyed this narration. When the narrator's style blends in so well that you don't notice the narrator - that is when it is done right!

I have enjoyed all the JA Jance books I've read, and this one was no exception. This is the first audiobook of hers I've listened to, and I found I was listening to it whenever I could. I wanted to know what happens. It wasn't until almost the end of the book that I guessed "who done it."

great story, i couldn't put it down! but what's up with the musical interludes?! weird.

The interrupting music is way too irritating; thankfully there is a recording without the music. Return this one & purchased the uninterrupted version.

What's with the music?

The book was pretty good, however, what's with the really inappropriate jazz-like music? It's not even in natural places and is very distracting. The narrator was good but was drowned out sometimes by that darn music!!