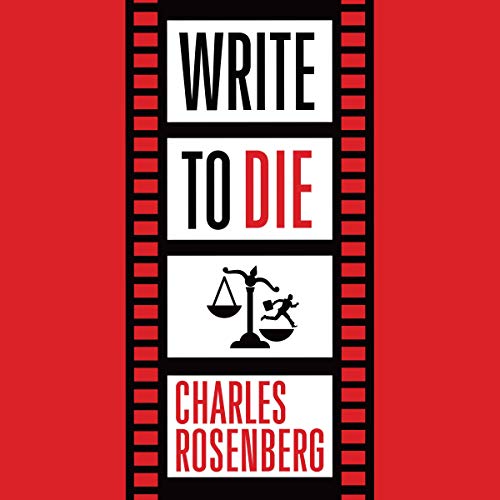 By: Charles Rosenberg
Narrated by: Will Damron
Try for £0.00

Hollywood's latest blockbuster is all set to premiere - until a faded superstar claims the script was stolen from her. To defend the studio, in steps the Harold Firm, one of Los Angeles's top entertainment litigation firms and as much a part of the glamorous scene as the studios themselves. As a newly minted partner, it's Rory Calburton's case, and his career, to win or lose.

But the seemingly tame civil trial turns lethal when Rory stumbles upon the strangled body of his client's general counsel. And the ties that bind in Hollywood constrict even tighter when the founder of the Harold Firm is implicated in the murder. Rory is certain the plagiarism and murder cases are somehow connected, and with the help of new associate Sarah Gold - who's just finished clerking for the chief justice - he's determined to get answers. Will finding out who really wrote the script lead them to the mastermind of the real-life murder?

What listeners say about Write to Die

This story is about murder and conspiracy with lots of court room drama. I enjoyed this novel very much. It's about a claim of plagiarism which develops into good court room drama while a civil case turn into a murder case. An interesting subplot involving a "newly minted partnership" between the two main characters which is described by Ted of Lancaster PA as "the next Tracey/Hepburn incarnation blitzed up for today." Thanks Ted for this recommendation, I hope there is more. I think it could become a popular series.

Marvelous legal thriller; I love it!!

This novel is MUCH better than the average 4,0 star rating would indicate. Rory Calburton recently made partner in a law firm that represents motion picture companies. He made partner through hard work despite the fact he graduated from an unaccredited law school. Sarah Gold is newly recruited by the firm after interning for the Chief Justice of the US Supreme Court. She also has a private investigator's license and carries a gun. Sarah "suffers" from ICD, impulse control disease, which means she does whatever comes to mind without getting permission; this frustrates Rory especially because she always comes up with valuable information. Although Write to Die includes a major civil case as well as a murder case, what makes the novel wonderful is the relationship between follow the rules Rory and follow her impulses Sarah. Narration by Will Damvon is stellar.

While I enjoyed earlier Rosenberg Books, I didn't expect this leap from him. Look, he's always been a competent writer and plotter, but commercial cliches seemed to lurk at the edges of those stories. But here! Whoooeeee... Here the Rory Calburton/Sarah Gold mix is the next Tracey/Hepburn incarnation blitzed up for today. They are a wonderful new team with Gold even stronger the Hepburn - if that's possible.

I hope this becomes a movie... Can't wait to see the casting. And why shouldn't it go to the screen. Its got murder, conspiracy, almost a sensational trial... plenty of fractured law to glue it all together (you know, theatrical law so the plot's not slower than a geek on a date with the campus beauty queen). Will Damon's up to this cast, he's a pace master for this plot and keeps it thrumming.

You want a knew he-she buddy law/murder mystery. Do "Write To Die" which I hope will become a series... I'm looking for the line waiting for the next. In the genre.... this is certainly among the top I've read in 2016.

Entertaining -- If You Can Ignore the Problems

Two lawyers try to fight a copyright suit at the same time their lawyer boss is accused of murdering their client's lawyer. And that's not where the lawyer characters end -- there are lots more where they came from. Are the two cases linked? If you have to ask, you can't afford to read this book.

Here's the good news: At the end of the day, this is a fun listen. The two main characters, a young lawyer and an even younger lawyer, may not be a classic couple like Nick and Nora or Tracy and Hepburn, but they're entertaining enough. The courtroom scenes are the best -- it helps that there are two different trials in progress. And the narration is good, especially since Will Damron has to read so much dialogue between male and female protagonists.

Here's the bad news: The plot has so many holes, even Swiss cheese is unfit as a metaphor. The best possible exculpatory evidence is introduced but not used to exculpate the accusee. The mystery is ultimately solved using a discredited device: deus ex machina (in fact, double deus ex machina). And the manic pixie dream girl, here taking the form of a smart, gorgeous lawyer with lack of impulse control, is well on its way to becoming a discredited device.

And the writing, oy! Classic gems like: "'Did you use protection?" He checked the floor. 'Seems like I did.'" Ugh! But... if you can put up with that kind of nonsense, the end result is not bad,

Rosenberg Creates his own Tracy and Hepburn

This is a heck of a good and interesting mystery made great with unforgettable characters. The conflicts, attraction, insecurities and brilliance of the two main characters, an accomplished litagator and his protege creates the perfect storm. Ted, a reviewer I follow, rightly compared them to Tracy and Hepburn. That should be enough to tell you how fun this book was to listen too.

The dialogue is smart and witty and the legal manuvering is well played. The narration is excellent as well.

Write to Die = Death on a High Floor

What made the experience of listening to Write to Die the most enjoyable?

What other book might you compare Write to Die to and why?

I enjoyed Charles Rosenberg's 1st courtroom mystery Death on a High Floor, but was put off by reviews of his 2nd and 3rd books. Write to Die #4 is as good as his first book. Don't hesitate to buy it.

Which character – as performed by Will Damron – was your favorite?

Not really. It was just a fun read.

Sarah Gold was unique, intriguing, and appealing.. She didn't fit the mold of a first year associate at a white show law firm.

I found that the development of the plot was suspenseful up to a point but then turned unrealistic. The behavior of Rory's associate, Sarah Gold, became quite unbelievable, even assuming she suffers from ICD. I do like legal niceties, but if you don't care for such details, you probably won't like this book.
Will Damron did a great job as narrator; otherwise, I might not have even finished. This seems to be the first of a series, but I'm not sure that I will read any subsequent books.

Based on the title, I had low expectations

Was Write to Die worth the listening time?

I got this as a daily deal, and I'm glad I didn't spend a credit on it, but it was still good to occupy my drive to work in the morning,

The story had a pretty corny plot line, but if you start listening to the book already knowing that, I think you'll be pleasantly surprised that it turns out a bit better than expected.

Write to Die by Charles Rosenberg

Interesting enough to keep your attention, cute, pleasing to listen to, a little different from usual lawyer book.

The book and reader are both ok, meaning not bad enough to return, not good enough to look for more by them. The story is better than the reader.