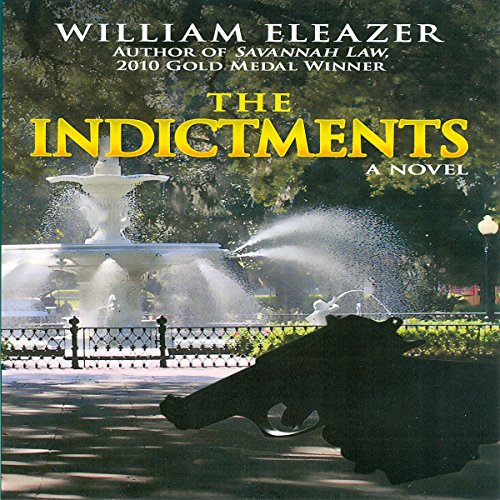 A brazen robbery by a masked man at one of Savannah's finest restaurants results in the murder of a teenage girl and murder indictments against two defendants. The assistant DA assigned to the case believes one indictment is without merit, and his attempt to have it dismissed threatens both his career and his life. With colorful characters and exciting and realistic courtroom drama, The Indictments will keep the listener riveted on the twisting plot until the unforgettable final chapter.

"Once is a mistake, twice is jazz!"

This excellent story basically tells the lawyer's side of the blocks and pitfalls along the way of trying to successfully prosecute a known serial robber, starting with the disastrous retrial in September, 2007, until a return to court in April, 2008. Throughout, it follows the life of a rising young lawyer, Scott, his work colleagues and friends and various investigations conducted during that times. It really highlights the frustration of the job where guilt has to be proved beyond any shadow of doubt, the tricks that can be played to ensure evidence is inadmissible and the sometimes frailties of victims and witnesses.

Well written, fascinating and suspenseful, this quite lengthy book is well narrated by Bob Johnson. As with another reviewer, initially I found his carefully paced delivery slightly disconcerting with an inflection to his sentences, but very quickly grew to appreciate the precise use of his very lovely voice. The conversation of different protagonists is mostly minimally differentiated: his is more of a reading than a performance. But this in no way distracts from the overall presentation nor of the understanding of who is speaking at any given time. It fitted the subject matter well.

This was an enjoyable, sometimes funny, often moving book, and wide ranging in topics covered. And the central story of how justice does not always equate to decisions under the law is totally absorbing. I was very fortunate in being g gifted a copy of The Indictments by the rights holder, via Audiobook Boom. Thank you. And I can happily recommend it to anyone who enjoys their thrills in a quieter version than simple violence and battles.

I am so used to reading books from the victim or perpetrators point of view so The Indictments was a real treat being from a prosecutors point of view.
This book kept me wanting to come back for more so I will definitely be reading more from this author.

The narration was also phenomenal. Bob did a fantastic job and I can't wait to hear more of his work as well.

Bravo to author and narrator!

This is the second book in this series and I have not read the first Savannah Law. I really don't think that would have made this audio book any better for me. I thought most of the story was good but at time I wondered where the author was going and found my self lost. Bob Johnson's narration is just okay. I did find the more I listened the more I could get into his style. He gives distinctive voices to the different characters and that part I found to be quite good. It was when he was just giving back ground that I had a problem.
I was gifted this book with the understanding I would leave an honest review

Once again I thoroughly enjoyed this audio book narration by Bob Johnson. I have listened to the other two books in the series and loved this one just as much. A year after the fact a prominent man's son's conviction of a robbery is overturned, on a technicality, due to the eyewitnesses change of testimony. A restaurant is robbed and a college student murdered.The DA is determined to get a conviction on this one. Are the two cases related? I was given this free review copy audiobook at my request and have voluntarily left this review.

The Book Didn't Live Up To It's Potential....

No; The Narrator Didn't Do Any Justification For This Book...But I Enjoyed The Plot And The Storyline..

I Was Disappointed... I Still Have Unanswered Questions About This Novel...

No! The Narrator Sound Like He Was Reading A News Cast Instead Of A Mystery Novel...

Could you see The Indictments being made into a movie or a TV series? Who should the stars be?

I Could See This As A Movie...The Main Character Was Very Likable... So Were The Other Characters I Especially Liked Bill Baldwin...

This Novel Could Have Reached Higher Heights If The Characters Were Opened Up More... Also The City Of Savannah Could Have Been Explored More...

Great listen . . . but a bit of an abrupt ending

Sine most all legal thrillers are written from the standpoint of defense attorneys, this was a refreshing change in that it is told from the prosecuting attorney's perspective. I had never heard of the author (or narrator), but the story had me hooked early on with a great blend of intrigue, suspense, and even a bit of sexual overtures resulting from the legal intern assigned to 'help' the DA's office prosecute their cases.

The characters and the story-line are well developed and move along pretty well while building upon each other. There is an ongoing level of suspense both from the perspective of the where the major case and investigation are going to go, along with who, if, and when will give in to the ways of the seductive, self-serving, intern. Many twists and turns that find you even getting to know and like (or dislike) some of the minor characters and the roles they play. My only complaint is that the book ends too abruptly. Not that it isn't brought to a clear conclusion, but some things are let unexplained (i.e. what ever became of the intern) and left to the imagination. Nothing intrinsically wrong with that, but when one spends so much time building a story around the #2 character, that character would be written out with something more than a single paragraph or two. Likewise, after building up all kinds of evidence and witness testimonies, the case is decided on a stunning observation by an unlikely eyewitness. Unfortunately, the telling evidence in this case is something that would NEVER have been overlooked by the crack attorneys on the team; it would have been obvious from the beginning. That being said, up until that revelation, there was no telling which way the case was going to go; it came out of the blue. I was left with the impression that the author reached a point where he decided something to the effect of "Hey, I have to finish this up," whereas a couple additional chapters could have pushed the book over the top.

As for the narrator: excellent job all around. I should state though, at first I was impatient with his tempo and even boosted up the reading speed . . . only to turn it back to the normal speed when I became aware that the tempo went perfectly with the laid back southern setting. Inf act, the narration style ended up adding immensely to my enjoyment of the book. He struggled a bit with 1 or 2 of the character voices (who wouldn't?), but did a great job with the subtle changes of inflection. Overall, I gave him 5-stars!

"I was provided this audio book at no charge by the narrator in exchange for an unbiased review via AudiobookBoom dot com". Regardless, I would recommend this listen to anyone that enjoys legal dramas/thrillers.

The plot is interesting with an engaging cast of characters. The narrator, has a wonderful talent for giving a different voice to each character. It makes for an enjoyable listening experience. I’m looking forward to listening to more of this series. "I was provided this audio book at no charge by the narrator in exchange for an unbiased review via AudiobookBoom dot com".

Both the author and narrator were new to me. I thought both did a great job with the story. I have not listened to many legal thrillers. This story captivated me and reminded me of parts of some movies I have seen and enjoyed. I was voluntarily provided with this review copy audiobook at no charge by the author, narrator, and/or publisher.

A Good Legal Thriller, With Twists and Turns On Every Side

Overall a great read, as Eleazer takes us from a sabotaged trial, to a restaurant murder, to the good and evil of power politics. Although the story sometimes takes a distracting turn, it keeps you involved until the end. This is the second book in the series but I found that it could stand alone.